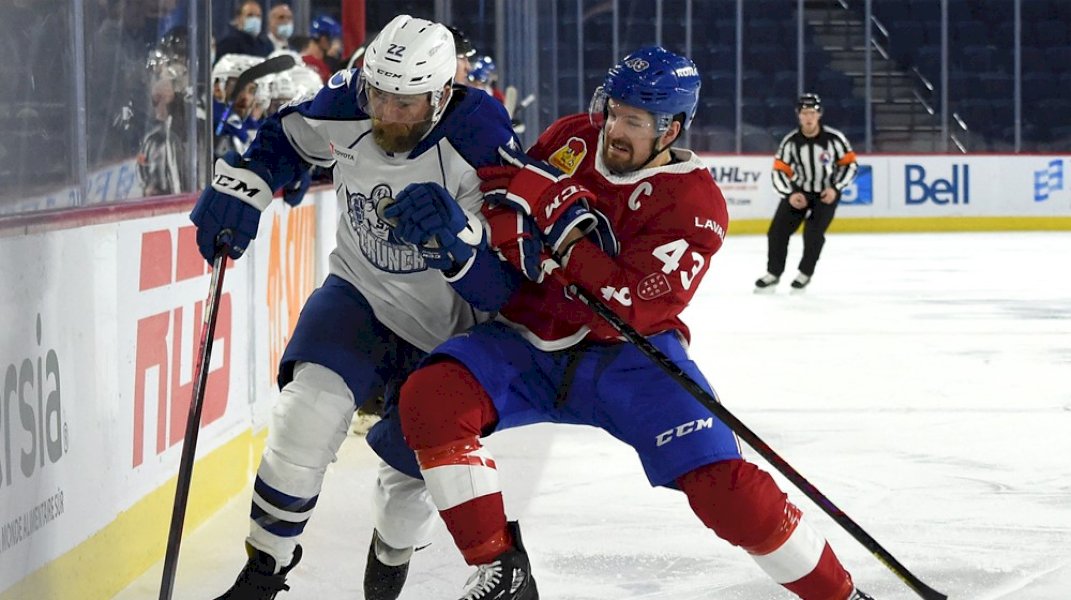 CRUNCH AIM TO BOUNCE BACK AGAINST LAVAL

The Crunch and Rocket rematch in the middle game of a three-game set at Place Bell. The Rocket scored a 6-2 win over the Crunch Wednesday night to earn their second straight win in the regular season series.

The Crunch (17-17-3-1) dipped back to 0.500 with the loss and dropped behind the Belleville Senators into sixth place in the North Division.

The Rocket (18-13-3-0) created separation between themselves and the Crunch in the standings, maintaining fourth place in the division.

Cameron Hillis struck twice in the first period for the Rocket as they defeated the Crunch, 6-2, Wednesday.

Hillis, recalled from the ECHL earlier in the week, opened the scoring at 1:47 of the first period and then scored his second of the night and fourth of the season 12 minutes later. Syracuse’s Gabriel Dumont pulled the Crunch to within one with his team-leading 17th tally of the season late in the first period on a pass from Anthony Richard.

The Crunch swapped goalies to begin the second period, inserting Corbin Kaczperski in place of Amir Miftakhov. Former Crunch forward Peter Abbandonato bested him 58 seconds into the period and Louie Belpedio made it 4-1 just under the mid point of the period.

Richard scored quickly to start the third for the Crunch, but they couldn’t pull closer than 4-2 before Laval added two late goals to seal the win.

The Crunch sank back to 0.500 with their loss to the Rocket Wednesday night and at 17-17-3-1 are in sixth place in the North Division due to a tiebreaker that currently favors Belleville.

One of the newest Crunch forwards Anthony Richard logged his first multi-point game for the Crunch with a goal and assist Wednesday. It was his first goal as a member of the Crunch and he now has three points (1g, 2a) in three games since joining the Crunch from Milwaukee in a trade last week.

The Rocket snapped a two-game losing streak with their win and improved to 6-3-1-0 in their last 10 games. At 18-13-3-0 Laval holds fourth place in the North Division and they have closed the gap on third place Rochester.

After receiving first star honors with one goal and one assist in their win on Wednesday, Louie Belpedio now leads Rocket defensemen in scoring with 16 points (6g, 10a) in 33 games. He is tied for third overall on the team in point production, behind Jesse Ylonen (19 points) and Kevin Roy (18 points).

Kevin Poulin was strong in goal for the Rocket on Wednesday, improving to 5-3-1 with a 2.92 goals-against average and a .907 save percentage this season.

LOOKING FOR THE HOT HAND

Crunch forward Alex Barré-Boulet looks to find his goal-scoring touch and provide a spark for the Crunch offense. The fourth-year forward is now on an AHL career-long 10-game goal drought since scoring his last goal Jan. 17 vs. Belleville.

Barré-Boulet worked through two nine-game droughts as a rookie for the Crunch in 2018-19. He managed to produce 34 goals that season, which tied with teammate Carter Verhaeghe for the most in the AHL, earning the Willie Marshall Award.

The Quebec native’s last goal was his 72nd with the Crunch, which tied him with former teammate Cory Conacher for the most scored by a Crunch player during the Lightning affiliation.

Despite the uncharacteristically low goal production, Barré-Boulet has still logged 21 points (3g, 18a) in 21 games.

The Rocket edged ahead of the Crunch in this season’s eight-game regular season series with their second win in three matches. It evened up the all-time season series between the clubs at 11 wins apiece; Syracuse is 11-8-2-1 and Laval is 11-10-0-1. The Rocket have won both matches in Laval, dropping the Crunch to 3-6-1-1 in Quebec since 2017-18.

Peter Abbandonato, who spent two seasons in Syracuse, has played with a chip on his shoulder against the Crunch. Following his three-point performance Wednesday night, Abbanondato leads the season series with four points (1g, 3a) in only two games played. Cole Koepke’s assist two nights ago moved him into the Crunch scoring lead against Laval, with three points (1g, 2a) in three games.

THE SECOND HALF BEGINS

The Crunch played their first 38 games over 125 days. Their final 38 games are scheduled to take place over 79 days.

Despite playing their home games in 2022 without or with minimal fans, the Rocket continue to be one of the best home teams in the AHL. Their win over the Crunch Wednesday night was their sixth straight on home ice stretching back to Dec. 3; they also have points in their last seven home games (6-0-1-0). Laval’s last regulation home loss was Nov. 26 vs. Belleville.

At 11-3-2-0 at Place Bell, the Rocket’s 0.750 home points percentage ranks fifth in the AHL and second in the Eastern Conference behind Utica.

The Crunch last won in Laval on March 13, 2019, losing their last four games at Place Bell.