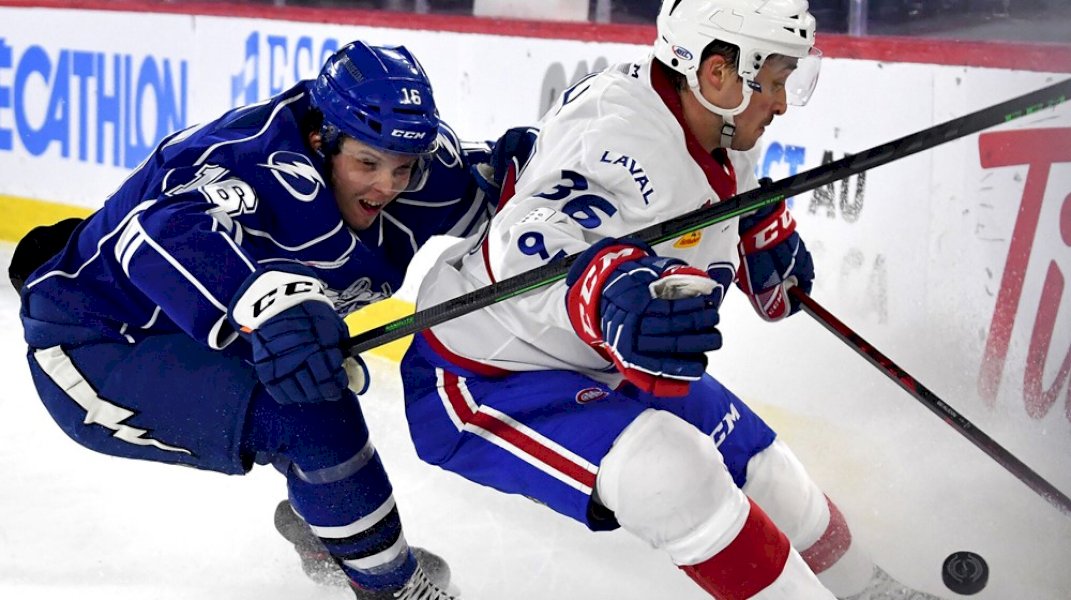 The Crunch play the first of what will be four straight matches against the Laval Rocket tonight at Place Bell. The teams will meet three times in four days in Laval and then wrap up this stretch next Friday in Syracuse. Tonight is the third of eight schedule contests between the clubs.

The Crunch (17-16-3-1) picked up their second straight win with a 3-1 victory over the Charlotte Checkers Saturday night.

Corbin Kaczperski made 32 saves in his first AHL start to aid the Crunch in a 3-1 win over the Checkers Saturday at Upstate Medical University Arena.

Gabriel Dumont put the Crunch in front midway through the first period. He collected a loose puck along the left goal line and flung it toward the net from the tough angle. His shot found its way home 9:49 into the game for a 1-0 Crunch lead.

Syracuse did the rest of its scoring in a 26-second span in the second period. Gabe Fortier whipped home a power-play goal at 4:55 of the period and Cole Koepke immediately followed up with his 10th goal at 5:21.

Kaczperski’s shutout bid was denied with 16.6 seconds left in regulation on a Kole Lind one-timer, but the Crunch held on for a 3-1 win.

The Crunch begin their three-game trip to Laval riding a two-game winning streak with wins over Belleville and Charlotte. Syracuse still holds the final playoff position in the North Division, ranking in fifth place out of seven teams with a 17-16-3-1 record.

The Crunch have had a very balanced home and road schedule as the team reached the halfway point of the season today. Tonight marks the team’s 20th road game this season while they have played 18 home games. Syracuse is 8-8-3-0 on the road this season and 9-8-0-1 at home. They’ve been slightly more prolific offensively on the road, averaging 2.89 goals per game on the road versus 2.72 at home, but they’ve been stingier defensively at home by giving up 3.00 goals per game at home versus 3.26 on the road.

This week’s three-game homestand against the Crunch are the only three home games for Laval over the course of nearly a month as the Rocket looked to mitigate the losses from capacity restrictions at Place Bell. They just completed a 2-2-1-0 road trip and then will go right back on the road for five straight games starting next Wednesday.

The Rocket are 17-13-3-0 and hold fourth place in the North Division, directly ahead of the Crunch. Both the Crunch and Rocket have a league-high 39 games remaining, but Laval only plays 72 games this season, so they don’t reach their halfway point until Saturday.

Jesse Ylonen leads the team with 19 points in 23 games. A majority of his success has been on the power play, where he has contributed 11 points (5g, 6a). Kevin Roy is second on the club with 17 points.

Cole Koepke’s insurance goal Saturday gave him 10 goals on the season, making him the third Crunch player to reach double digits this season. The Hermantown, Minnesota native joins Gabriel Dumont (16) and Charles Hudon (15) with at least 10 goals this season for the Crunch.

This season, 21 different players have scored a goal for the Crunch. Gabe Fortier and Remi Elie are next in line with seven goals apiece for the Crunch; new Crunch forward Anthony Richard also has seven goals, but all seven came with Milwaukee prior to his acquisition by the Lightning last week.

The teams have split the first two games of the eight-game regular season series with the home team winning both contests. The Crunch earned a 4-0 shutout win Nov. 6 and the Rocket responded with a 3-2 victory Jan. 12. Amir Miftakhov earned the victory by making 29 saves for his first North American shutout.

Charles Hudon, Cole Koepke and P.C. Labrie pace the Crunch with two points apiece in the series. No Laval skater has more than one point; Jean-Sebastien Dea, Alexandre Fortin and Brandon Gignac score Laval’s three goals in their win.

Laval, normally a happy homecoming for many Québécois on the Crunch roster, will again play host to minimal fans for the three home games this week. During the Crunch’s previous trip to Laval on Jan. 12, Place Bell was devoid of all fans; the provence is now allowing 500 to attend each game.

Last week in Belleville, the Crunch played one game with no fans before the Senators were permitted just under 500 in the series finale.

CLOSING THE FIRST HALF

The Crunch will have played their first 38 games over 125 days. Their final 38 games are scheduled to take place over 79 days.

All four active Crunch goaltenders made the trip with the team to Laval this week. Hugo Alnefelt and Max Lagace have not played in a game since Jan. 21 and Jan. 22 respectively as they recover from injuries suffered on those two nights.

In their place, Amir Miftakhov and Corbin Kaczperski have combined to suit up in the last six games, with the Crunch going 3-3-0-0. Miftakhov made five straight starts from Jan. 26 to Feb. 4 and Kaczperski made his first AHL start on Saturday. Miftakhov leads the team with 17 appearances and Alnefelt and Lagace have 12 games each.