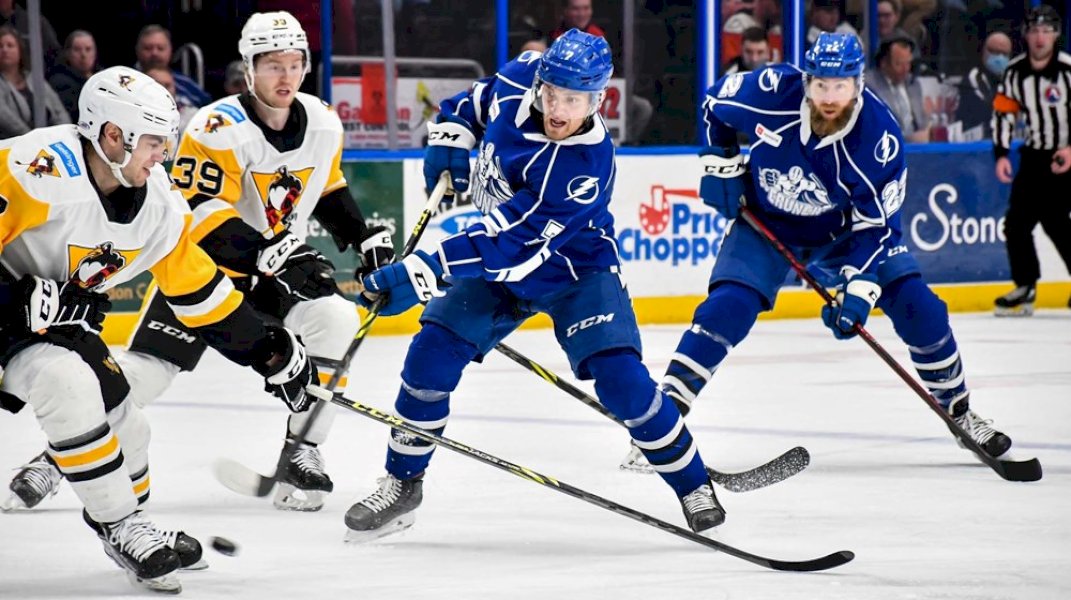 The Crunch make their third trek to Pennsylvania in the last three weeks as they take on the Wilkes-Barre/Scranton Penguins at Mohegan Sun Arena at Casey Plaza.

It’s the first match of the four-game season series; they play once in January, February, March and April.

The Crunch shot past the Utica Comets, 5-1, on Monday afternoon at Upstate Medical University Arena.

Gage Goncalves opened the scoring with a shorthanded goal 3:18 into the first period to put the Crunch up 1-0. Gabe Fortier doubled the lead by cashing in after Daniel Walcott sprung him on a breakaway from the hashes in. The Comets grabbed one back when Nolan Stevens scored from the left circle to make it a 2-1 game before the second period.

Gabriel Dumont ripped home a power-play goal at 13:54 of the second period to put the Crunch ahead 3-1. Goncalves and Fortier both completed two-goals games late in the third period to send the Crunch to their 5-1 win.

The Crunch have earned three straight wins for their third streak this season of at least three straight victories. They also have five-game and four-game winning streaks this year. The Crunch scored at least five goals in all three wins and they have outscored their opponents 17-6. They are 16-13-2-3 this season and remain in fourth place in the North Division with 37 points.

Syracuse is the highest scoring team in the Eastern Conference with an average of 3.76 goals per game. The Crunch are powered by two top-five scorers in the league in Darren Raddysh (10g, 31a) and Alex Barré-Boulet (9g, 32a), who both have 41 points.

Hugo Alnefelt returned from injury and secured back-to-back wins in the Crunch crease to extend his personal win streak to five games. He stopped 58 of 61 shots (.951 save percentage) over the two games and he has played to a 1.80 goals-against average and a .939 save percentage during his five-game win streak. He is 9-4-1/2.47/.917 this season.

Crunch players and coaches have recently been talking about a need for faster starts to games. That has recently come to fruition, with the Crunch scoring opening goals in the first five minutes of their last two games.

Darren Raddysh gave the Crunch a 1-0 lead 2:23 into the game Saturday at Lehigh Valley. That is the earliest into a game the Crunch have scored this season. Then Gage Goncalves potted the opening score at 3:18 on the game in Monday’s win for the fastest goal scored on home ice for the Crunch this year.

Syracuse is 10-5-0-1 this season when scoring first, but the team has won five of its last six such instances.

Gage Goncalves tied for the team lead in scoring with five points (4g, 1a) over the three games to extend his scoring streak to five games. It’s his second such streak of the season (Nov. 5-16). Goncalves scored a goal in all three games, scoring the game-winning goal in Friday’s win and the insurance goal Saturday before netting his first career two-goal game while celebrating his 22nd birthday yesterday.

The second-year-pro also scored his first career shorthanded goal yesterday. He ranks fifth on the Crunch with 27 points (8g, 19a) in 34 games. As a rookie last season, Goncalves finished with 32 points (17g, 15a).

The Penguins enter the week following a two-game split in Charlotte, where they lost Saturday before winning in a shootout on Sunday. They are in the thick of the Atlantic Division race with an 18-11-2-3 record and 41 points, which puts them in fourth place.

Alex Barré-Boulet is re-writing the Crunch record books. He has picked up five points, including four assists, in the last three games to establish the Crunch’s new franchise record for assists in a career.

Brad Moran held the previous record for assists at 143 and Barré-Boulet also has Moran in his sights for the all-time points record. Moran scored 241 points for the Crunch in 334 games while Barré-Boulet has 240 Crunch points in 234 games.

Barré-Boulet has also moved back into a tie for the scoring lead on the team this season with 41 points (9g, 32a) in 32 games.

LET’S MAKE A DAY OF IT

Today is only the Crunch’s fourth day trip road game-when they leave Syracuse in the afternoon ahead of their game at night-of the season. Their day trip opponents are typically Rochester, Utica and Wilkes-Barre/Scranton; the Crunch have made three trips to Rochester and non to Utica.