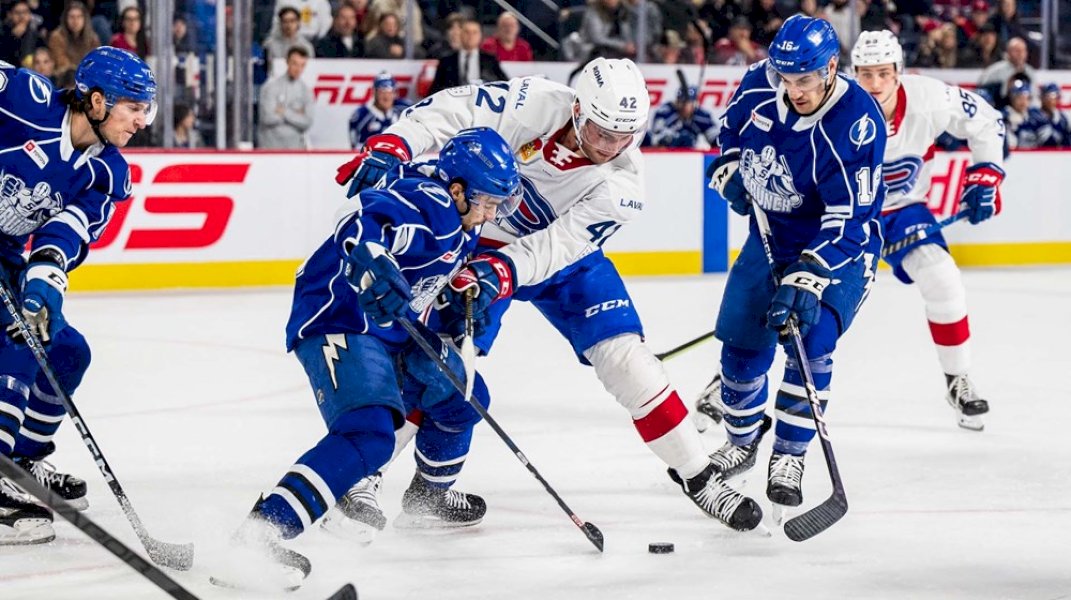 CRUNCH LOOK TO GET BACK ON TRACK

The Crunch begin a stretch of six games in nine days tonight as they host the Laval Rocket at Upstate Medical University Arena.

This Crunch’s five-game winless skid (0-4-0-1) began against the Rocket, who swept a pair of games in Laval at the end of December. The home team has won all three games so far in this eight-game season series.

The Crunch dropped the final game of their three-in-three weekend, 4-3, to the Hershey Bears at the Giant Center Sunday night.

The Crunch fell behind on a goal from Hershey’s Beck Malenstyn 4:19 into the first period. The Bears doubled the lead on a breakaway goal from Connor McMichael 2:49 into the second period. Jack Finley put the Crunch on the board with a rip from the left circle at 8:22 of the middle stanza, but the Bears rattled off two goals in four minutes, later in the period to open a 4-1 lead.

Syracuse clawed back in the third period on goals from Gabriel Dumont at 8:37 and Shawn Element at 13:03, but the Crunch couldn’t find the equalizer. It capped the first three-in-three weekend without a win for the Crunch since April 15-17, 2016.

The Crunch’s last win came on Dec. 21, a 2-1 win over the Rocket. They have been outscored 22-12 during a  five-game winless streak, and they haven’t held a lead since they led 1-0 Dec. 30 at Laval in the second game of this streak.

Declan Carlile has recorded two points (1g, 1a) in three games against the Rocket this season. The defenseman is also the third best offensive contributor among blueliners on the team, racking up 13 points (5g, 8a) in 29 contests in his rookie campaign.

Forward Shawn Element carries a three-game goal-scoring streak after picking up a tally in all three games in Week 13. His marker on Friday tied the game in the third period to send the game overtime. The next night he sparked the Crunch’s comeback effort with a power-play goal in the second period. He then scored on a deflection Sunday at Hershey to cap the week.

The second-year-pro is tied for sixth on the Crunch with seven goals this season. He has five goals in the last nine games since Dec. 10, leading the Crunch in goal scoring in that span. Element has 12 points (7g, 5a) in 25 games this season and he scored his first two career power-play goals Friday and Saturday.

Jack Finley ended the week with goals in back-to-back games. The rookie snapped a 10-game goal drought by scoring his fourth goal of the season 18 seconds into the third period Friday against the Amerks. The 20-year-old followed that up by scoring the Crunch’s first goal in their loss to Hershey on Sunday.

Finley has goals in back-to-back games for the first time in his career. He has 10 points (5g, 5a) in 31 games while playing to a plus-7 rating this season.

The Rocket are wrapping up a three-game road trip tonight in search of snapping a three-game losing streak (0-2-1-0). The first two legs of this trip have been regulation losses at Toronto and at Rochester, which has dropped their road record to a league-worst 5-12-0-0. Overall, the Rocket are 13-17-4-1 and have 31 points to sit in sixth place in the North Division.

Leading scorer Anthony Richard rejoined Laval following a three-week stint with Montreal. Richard-who finished last season with the Crunch-has a team-leading 18 goals and 32 points in 28 games for the Rocket. He picked up his first career NHL goal and added an assist in seven games for the Canadiens.

CLOSING IN ON THE RECORD BOOKS

Alex Barré-Boulet picked up assists in each game in Week 13, pulling to within one of the Crunch’s franchise record. He had one power-play assist, one shorthanded assist and one assist at regular strength to give him 28 helpers on the season, which ranks third in the league behind Abbotsford’s Christian Wolanin (35) and teammate Darren Raddysh (29).

Barré-Boulet needs one assist to tie and two assists to pass Brad Moran on the Crunch’s all-time assist list. He needs seven points to set a new franchise record for all-time points.

Three Crunch players have been picked for the 2023 AHL All-Star Classic, slated for Feb. 5-6 in Laval. Crunch captain Gabriel Dumont was named one of the two playing captains last week by the AHL. Alex Barré-Boulet and Darren Raddysh were announced as All-Star selections two days ago. Syracuse is tied with a handful of teams for the most All-Star selections (3).

Dumont is set to appear in his second AHL All-Star Classic (also 2013). Dumont sustained an injury at the start of the season and jumped back into the lineup with 11 points (6g, 5a) in 18 games.

Alex Barré-Boulet is also making his second AHL All-Star Classic appearance. He competed in 2020 for the Crunch during his second AHL season. The forward enters today with 36 points (8g, 28a) in 29 matchups, good for ninth in the league in total points.

Darren Raddysh has taken his game to new heights this season with his first AHL All-Star Classic selection. The defenseman set career-high marks in goals (9), assists (29), and points (38) this year before the halfway mark of the season. The blueliner’s 38 points lead the Crunch and are also second-best among AHL defensemen and fifth-best among all skaters.