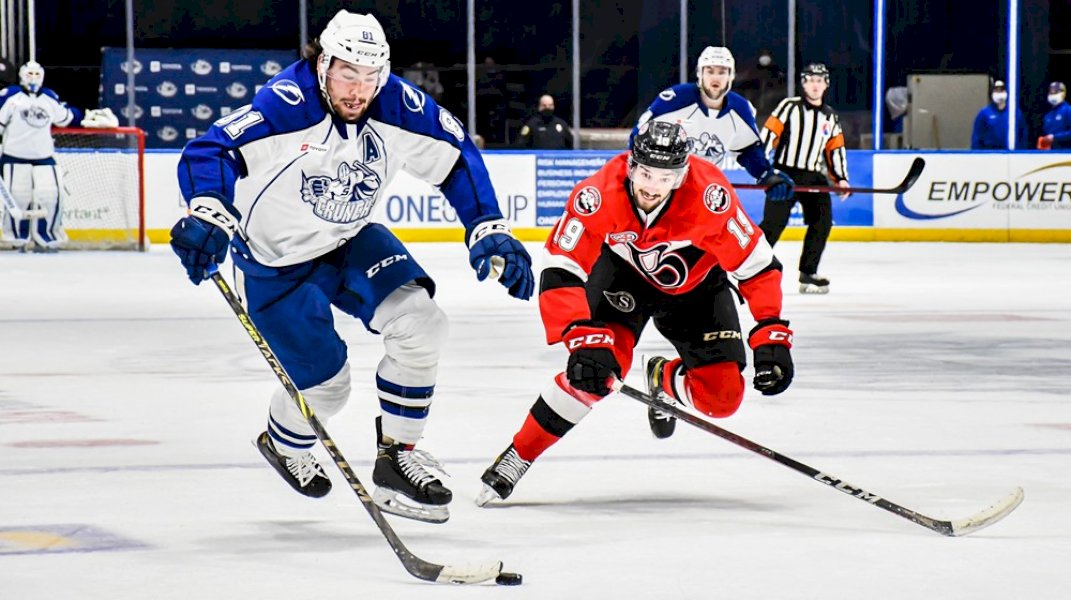 The Crunch square off against the Belleville Senators for a Martin Luther King Jr. Monday Matinee at Upstate Medical University Arena.

Syracuse (12-11-3-1) earned three of four points in a weekend home-and-home series against the Utica Comets. The team is in the midst of a seven-game in 11-day stretch.

For the second night in a row, the Crunch dominated the game, but this time Utica scored first on a cross-crease set up for Joe Gambardella at 11:44 of the first period. The Crunch scored the next three goals, with Hudon tying the game with his first career shorthanded goal at 5:30 of the middle period.

Gabe Fortier broke a 1-1 tie 9:58 into the third period with an in-tight finish for his sixth goal this season. Max Cajkovic made it two goals in 59 seconds to give the Crunch a 3-1 lead. The Comets rallied with two goals in four minutes to force overtime before Hudon connected on a rebound for a power-play goal to give the Crunch the 4-3 win.

The Crunch have earned points in seven of their last nine games (6-2-1-0) dating back to Dec. 10. They have also earned points in five of their six games (4-1-1-0) following their three-week break. Overall they are 12-11-3-1 and sit in sixth place in the North Division with a 0.519 points percentage.

Charles Hudon extended his point streak to five games and his goal-scoring streak to four with a pair of tallies Saturday. He netted his first career shorthanded goal during regulation and then potted his seventh power-play goal for his second overtime winner this season. He is one of eight AHLers with two overtime game-winning goals this season; he also ranks second in the league with seven man-up goals. It’s Hudon’s third career goal streak of four games; he has never scored a goal in five consecutive games.

The Senators are in the midst of five straight road games. After losing the first game in Toronto, Belleville won a pair of games—one in a shootout and one in overtime—this weekend in Rochester. The Senators end their trip in Laval on Friday.

While they’ve hovered around the 0.500 mark all season, Belleville has only climbed above 0.500 one time and that was when they were 9-8-0-0 following a win against the Rocket Nov. 27. A win today for the Senators would give them an above 0.500 record and a three-game winning streak for the second time this season.

Two Sens have at least 20 points this season. Jake Lucchini leads the team with 23 (10g, 13a) in 30 games. Egor Sokolov scored the overtime game-winning goal Saturday against the Amerks to give him 21 points (9g, 12a) in 26 games this season.

Crunch forward Otto Somppi collected an assist Saturday to give him points in seven of the last eight games since Dec. 11. He has seven points (2g, 5a) in those eight games.

After missing nearly a month to start the season, the fourth-year pro has eight points in 17 games this year. He has produced 56 points (22g, 34a) in 121 career AHL games.

This afternoon’s tilt with the Senators marks the fifth time since the 2016-17 season that the Crunch are hosting a Martin Luther King Jr. Day matinee matchup; it’s the sixth straight year overall (excluding the pandemic-shortened 2020-21 season) they’ve had a game on the holiday. Syracuse is 5-0 and has outscored its opponents 13-4 on home ice and 15-5 overall.

During their two-game set with the Comets over the weekend, the Crunch allowed 37 total shots and outshot Utica 72-37. By allowing 20 shots on Friday and 17 on Saturday, the Crunch have limited opponents to 20 or fewer shots on goal in three of their six games since returning from their three-week break.

Today’s game marks the midway point of the Crunch’s stretch of seven games in 11 days. So far, the Crunch have posted a 1-1-1-0 record in this stretch, which began with a regulation loss in Laval last Wednesday.

After today, the Crunch make another trip to Rochester on Wednesday before tackling the Utica Comets for a second-straight home-and-home weekend series; they host the Comets Friday and travel to Utica on Saturday.

The Crunch have won their last three home games to get back to even terms (6-6-0-1) at Upstate Medical University Arena this season.

Syracuse has outscored its three opponents 12-7 during this home winning streak.

Raiders Come Back To Win in OT Thriller