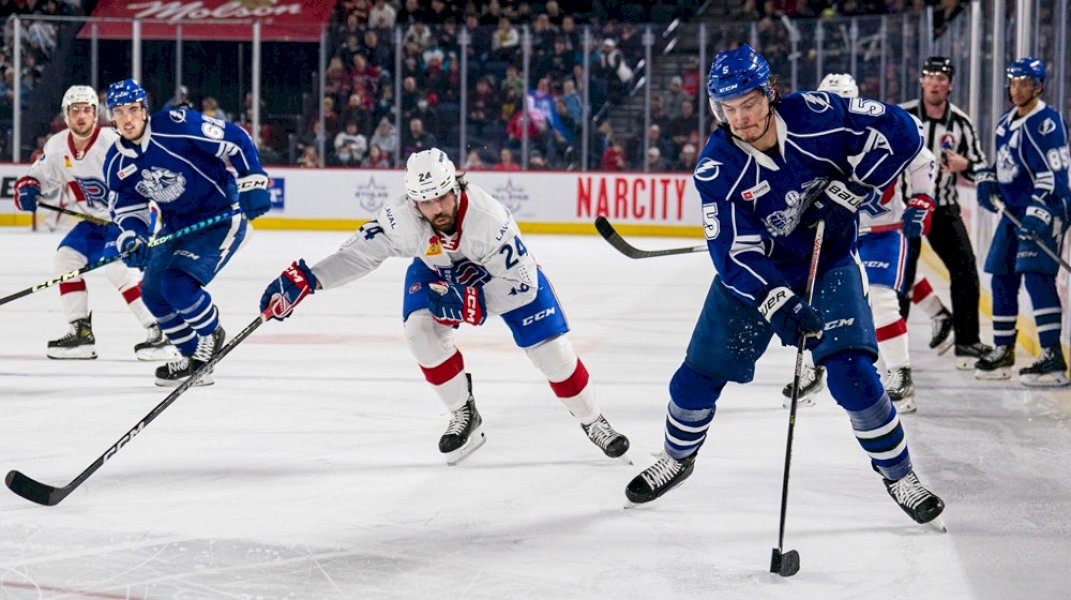 The Crunch and Rocket go head-to-head for the second time in three days tonight at Place Bell. It is the third game between the clubs in 10 days with both teams earning one win.

The Crunch grabbed a 2-1 win in Syracuse last Wednesday and the Rocket earned a 6-3 victory in Laval two days ago.

The Rocket scored three goals in the first period to blast past the Crunch, 6-3, Wednesday night.

Laval scored three times, each around five minutes apart, to open a 3-0 lead in the first period. Rem Pitlick, Joel Teasdale and Corey Schueneman each scored for the Rocket.

After an Olivier Galipeau tally made it 4-0 early in the second period, Alex Barré-Boulet netted one off a pass from Declan Carlile to pull the Crunch back within 4-1. A William Trudeau marker upped Laval’s lead to 5-1 heading to the third period.

Alex Belzile scored 1:07 into the third on Jack LaFontaine, who relieved starter Max Lagace to begin the period. Syracuse picked up goals from Barré-Boulet and Gabe Fortier 24 seconds apart to make it 6-3, but they couldn’t get any close as their four-game winning streak was snapped.

Quebec native Alex Barré-Boulet paced the Crunch with a pair of goals in the loss Wednesday night. It was his third multi-goal game of the season and gives him eight tallies this season. He ranks second on the team in scoring with 33 points (8g, 25a) in 25 games. The two points moved the fifth-year-pro into sole possession of second place on the Crunch’s all-time scoring list with 232 points; he needs 10 more to set a new franchise record.

Gabriel Bourque led the way for Laval Wednesday with three assists on the Rocket’s first four goals. The veteran, who scored the series-clinching overtime goal against the Crunch in last year’s North Division Semifinals, has 12 points (6g, 6a) in 27 games this season.

Goaltender Kevin Poulin has stopped 55-of-60 Crunch shots in the two games since last Wednesday, good for a .917 save percentage. Last season he was 4-0-0 with a 1.23 goals-against average and a .954 save percentage against the Crunch.

Gemel Smith extended his scoring streak to an AHL-high 14 games with an assist in the third period Wednesday night. Smith has picked up 19 points (8g, 11a) during his 14-game scoring streak, which is the longest streak of his career. He is tied with Boris Katchouk for the longest streak during the Lightning affiliation. It’s the third longest streak in franchise history behind Mark Hartigan (18 games) and Andy Delmore (15 games), who both set those marks in 2005-06.

ROUNDING OUT THE YEAR

NOT SUCH A WARM WELCOME

The Crunch’s games at Place Bell constitute a game in the home Province of eight players and three coaches. Unfortunately, it hasn’t been quite the homecoming they would like in recent memory. The Crunch have lost seven straight regular season games in Laval, going 0-5-2-0 since their last regular season win March 13, 2019.

Syracuse did earn a win in Place Bell when facing elimination in Game 4 of the 2022 North Division Semifinals.

The Crunch come back to Laval twice more with their next trip slated for Feb. 10, right after the AHL All-Star Classic, which will be hosted by the Rocket.