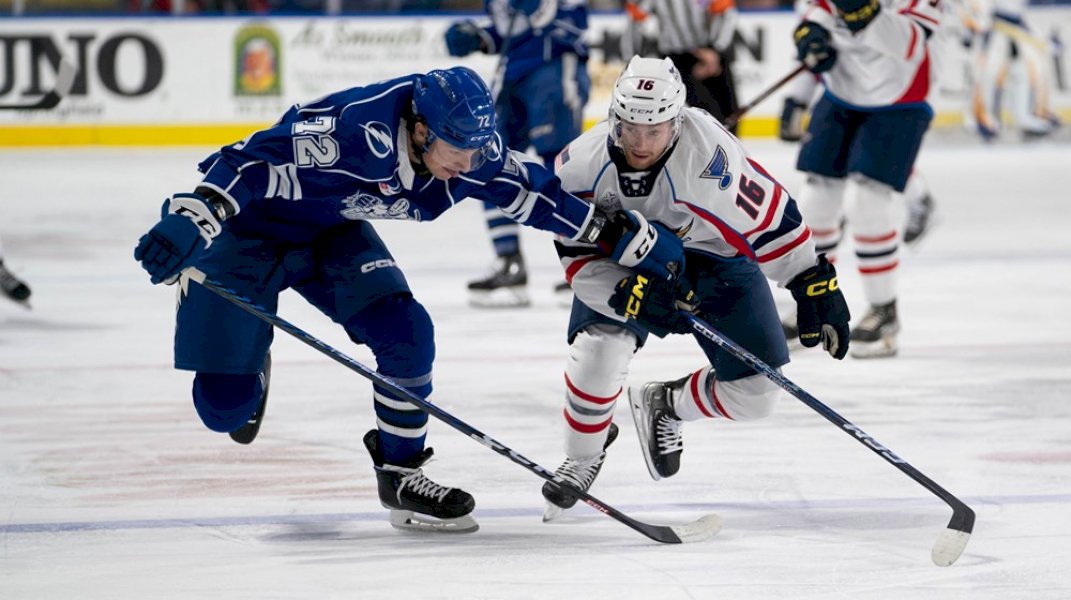 It’s the final game of the two-game season series between the clubs. The Crunch overcame a 4-1 deficit to beat the T-Birds, 5-4, in a shootout Nov. 16 at Springfield.

The Crunch will wear specialty lavender and white jerseys during the game. Ten will be auctioned on the ice immediately following the game — fans interested in participating in the live auction should report to Sections 203 and 204 after the game.

Mystery pucks and other unique items will be available both on the concourse and the GiveSmart platform with proceeds going to Upstate Cancer Center.

The Crunch scored five straight goals to down the Comets, 5-1, Saturday in Syracuse.

Utica’s Nolan Stevens opened the scoring just 4:25 into the first period to give the Comets a 1-0 lead. Shawn Element responded for the Crunch by chipping in a shot off a feed from Gemel Smith to tie the score at 7:19, igniting the Crunch’s Stanley Steemer Tired Teddy Toss. After a delay to collect the puffy pets, Cole Koepke gave the Crunch the lead for good by firing home a shot at 12:19.

Darren Raddysh and Felix Robert added goals in the second period to up the Crunch lead to 4-1. Gage Goncalves capped the scoring with an empty-net goal in the third. Hugo Alnefelt made 28 saves in the win.

Syracuse is back on the ice after a near week-long break in its schedule, coming off of a 5-1 win over Utica last Saturday. That victory moved the Crunch to 10-9-2-2 on the season, fourth in the North Division with 24 points. Tonight, is the first leg of a back-to-back, and the third game in Syracuse’s five-game homestand.

The last time the Crunch faced off against the T-Birds, they rattled off three unanswered goals to claim a 5-4 shootout win at Springfield. Crunch forward Gemel Smith was a key contributor; he finished with two points (1g, 1a) and the shootout game-winning goal. Smith is third on the Crunch with 24 points (8g, 16a) in 19 games this season.

Syracuse has also gotten offense from defenseman Declan Carlile. The rookie scored the game-tying goal in Syracuse’s lone meeting with Springfield. Carlile has nine points (4g, 5a) in 21 games played this season.

Forward Jake Neighbours has stepped up for Springfield. A first-round pick in 2020, Neighbours has scored goals in consecutive games. The first one was a shorthanded goal against the Milwaukee Admirals last Saturday and the second was the overtime game-winner against the Islanders Wednesday night. The forward has recorded seven points (2g, 5a) in 12 games this season. Neighbours started the year in the NHL, playing 13 games for the St. Louis Blues.

Syracuse snapped a three-game home losing streak (0-2-1-0) with its win over the Comets last Saturday. It was the Crunch’s second three-game skid on home ice this season. Sandwiched between those was a three-game winning streak and the Crunch are 5-4-2-0 at Upstate Medical University Arena this season.

With points in all three games last week, Gemel Smith extended his scoring streak to a career-high 10 games. He had a pair of two assist games (Wednesday and Saturday) and scored one of the two Crunch goals in Friday’s loss to Toronto. Smith has picked up 14 points (5g, 9a) during his 10-game scoring streak, which is the longest active streak in the AHL. It’s the Crunch’s first player point streak of at least 10 games since 2020-21; the longest by a Crunch skater during their affiliation with the Tampa Bay Lightning is 14 games (Boris Katchouk).

The Toronto native is third on the Crunch with 24 points (8g, 16a) this season, and he has registered at least one point in 17 of his 19 games played. He started the season with a seven-game points streak.

Crunch forward Daniel Walcott is set to break the franchise record for games played. Tonight will be his 335th Crunch game, breaking the tie with Brad Moran.

Walcott, 28, is playing in his eighth different season with the Crunch after debuting with the team in the 2015-16 season. In his first 334 Crunch games, Walcott, who has transitioned from a defenseman to a forward during his career, has amassed 92 points (32g, 60a). He has 13 points (7g, 6a) in 23 games this season.

The Thunderbirds were the Crunch’s kryptonite on the power play in their first meeting this season. Despite Syracuse’s respectable penalty kill rate and Springfield’s league-worst power play heading into the matchup, the T-Birds scored all of their goals with the man advantage, going for 4-for-5.

Springfield operates at 18.9% and 84.4% on the power play and penalty kill respectively.