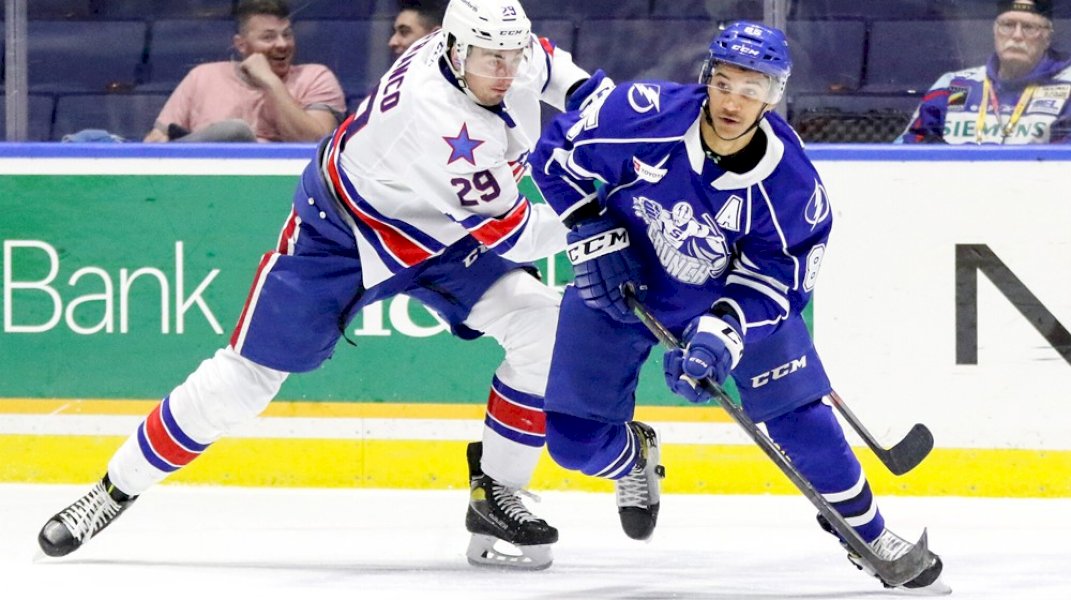 CRUNCH TAKE ON THE AMERKS IN SYRACUSE

The Crunch wrap up their weekend with their third game in four days tonight as they host the Rochester Americans. It’s the fourth match between the clubs this season and the second one this week.

Syracuse (10-10-2-1) enters on three-game winning streak which is tied for their longest this season. The Crunch have won four of their last five games dating to Dec. 10.

The Amerks (18-10-0-0) rebounded from their Wednesday loss to the Crunch with a 5-2 win over the Hartford Wolf Pack last night.

The Crunch extended their winning streak to three games with a 5-3 win over the Hershey Bears last night at Upstate Medical University Arena.

For the second time this week, Cole Koepke netted the game’s opening goal, staking the Crunch to a 1-0 lead on a tic-tac-toe pass play involving Gabriel Dumont and Alex Barré-Boulet just 2:45 into the game. Hershey responded with a power-play goal later in the first period before Alex Green blasted in his first goal of the season to put the Crunch up, 2-1.

The teams traded goals in the second period with P.C. Labrie potting his first goal in his first game back with the Crunch. In the third, Gabe Fortier increased the Crunch’s lead to 4-2 and Barré-Boulet sealed the win with an empty-net marker as the Crunch collected their second win in three matches with Hershey.

After a win last night over the Hershey Bears, the Crunch vaulted over the Belleville Senators and now own the sixth spot in the North Division with a 10-10-2-1 record. Including a win before the Crunch’s extended break over Christmas, the team has now won three straight and holds a 0.500 record for the first time since they were 5-5-2-1 Nov. 17.

Cole Koepke has continued his hot streak into the new year. The rookie has eight points in his last five games and last night tied Gabriel Dumont for the team’s longest goal-scoring streak at four games. Only three players in the AHL—including Amerks forwards Michael Mersch and Sean Malone—have recorded a goal in five straight games.

Goaltender Max Lagace also won his fourth straight game last night, the longest run by a Crunch goaltender this season. In his four-game win streak, Lagace has allowed nine goals and owns a .914 save percentage.

Including Cole Koepke, the Crunch currently have three players that have recorded a point in at least three consecutive games. Otto Somppi has recorded an assist in each of the team’s last four games and Alex Barré-Boulet has four points in his last three games (1g, 3a). Since joining the team on Dec. 8, Barré-Boulet has points in all but one game and has seven points (2g, 5a) in six games.

Ryan Jones lost his three-game point streak on Wednesday in Rochester, but with an assist last night, the defenseman has five points in his last five games (2g, 3a). Jones’ assist last night also tied his AHL career high for points in a season (7) set last year in 29 games with the Amerks.

The Americans currently sit second in the North Division with a 18-10-0-0 record. The Amerks won last night against the Wolf Pack, 5-2, and are 6-4-0-0 in their last 10 games. Wednesday in Rochester, the Crunch beat the Amerks, 2-1; it was just the third time all season that the Americans were held to one goal.

The Amerks lead the entire AHL in goals for this season, netting 107 in 28 games, outpacing the second place Stockton Heat (97). Michael Mersch has been a steady presence for the Americans all season, playing in every game and posting 30 points (16g, 14a).

Rochester’s three-headed rookie monster of Jack Quinn, JJ Peterka and Peyton Krebs will be a man short tonight. Krebs was placed in Covid protocol earlier this week after being called up to the Buffalo Sabres. Quinn netted a goal last night and ranks second on the team in scoring with 26 points despite missing extended time with mono.

CLOSING IN ON CONACHER

Alex Barré-Boulet’s empty-net goal last night was the 71st of his Crunch career. It moved him into sole possession of ninth place on the Crunch’s all-time goal-scoring list and brings him to within one of Cory Conacher (72) for the most scored by a Crunch player during the Lightning affiliation.

Barré-Boulet, who appeared in his 150th career AHL game last night, has 143 points (71g, 72a) in his Crunch career. He is tied with Matt Taormina for third-most by a player during the Lightning era, only trailing Yanni Gourde (157 points) and Conacher (205 points).

LABRIE IMPRESSES IN RETURN TO THE CRUNCH

In his first game back with the Crunch since the 2013-14 season, P.C. Labrie fought and scored a goal. The veteran forward also registered a +2 rating. Labrie signed a two year, AHL contract with the Crunch yesterday after starting the season on a PTO with the Hartford Wolf Pack. In 21 games in Hartford, Labrie had eight points (2g, 6a).

GREEN SHEDS THE MONKEY ON HIS BACK

Last night, Alex Green scored his first goal of the year to give the Crunch a 2-1 lead in the first period against the Bears. The defenseman also picked up an assist on Gabriel Fortier’s game-winning goal in the opening minutes of the third period. In total, Green finished the night with two points and a +2 rating.

It was Green’s fourth multi-point performance of his AHL career, and his first since May 15, 2021 versus Rochester.