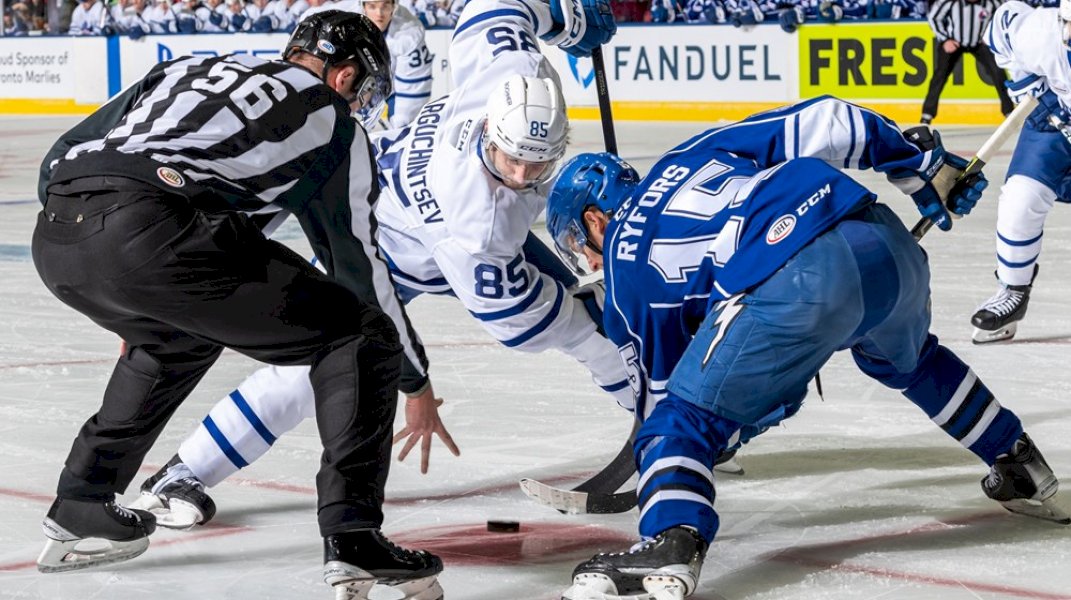 The Crunch begin a five-game homestand tonight as they host the Toronto Marlies at Upstate Medical University Arena.

It is the fifth of six head-to-head matches this season and the final one in Syracuse. The teams have split the first four games with the Crunch winning the last two.

The Americans netted the first goal on a tip by Brett Murray 12:33 into the first period. Crunch captain Gabriel Dumont responded less than five minutes later on a similar deflection near the crease at 17:12, tying the score 1-1.

Ryan Jones broke the tie with a goal from the left circle at 14:34 of the second period for his second goal of the season. That would stand as the game-winning goal as the Crunch pulled away in the third period with three more goals. Darren Raddysh set up the first two with point shots that were deflected in by Gabe Fortier and Gage Goncalves midway through the frame. Simon Ryfors iced it with an empty-net strike late in the third.

Syracuse stands in fourth place in the North Division with 22 points. The Crunch are just five points back of the first place Marlies.

In what has been a see-saw battle between Darren Raddysh and Alex Barré-Boulet, it was Raddysh who re-claimed the team’s scoring lead following a two assist game Wednesday night. The defenseman is tops with 28 points (8g, 20a) in 20 games. He is just two points shy of his career high, which came over 76 games in 2018-19. Wednesday was his eighth multi-point game this season. With Calgary’s Matthew Phillips (30 points) on recall to the Flames, Raddysh leads all active AHL players in scoring.

Toronto sits in first place in the North Division at 13-8-1-0 and 27 points. The Marlies fell to Belleville, 4-2, on Wednesday. They’ve dropped two of their last three games. One of those losses was against the Crunch last Saturday when Syracuse defeated Toronto, 3-1. After starting the season with a 9-2-1-0 record, the Marlies are just 4-6-0-0 in the last 10 games. Their eight road wins (8-3-0-1) lead the Eastern Conference.

Logan Shaw (8g, 17a) has been the fire power for Toronto this season. The center is tied for fifth place in the AHL with 25 points. The Nova Scotia native has recorded an assist in each of his last four games. Shaw is also on a six-game point streak. He was named the Marlies 10th captain in franchise history earlier this week.

Alex Steeves scored the lone goal in the Marlies loss to the Crunch one week ago. His five-game point streak was snapped in Wednesday’s loss to Belleville. The St. Paul, Minnesota native has recorded 20 points (7g, 13a) this season.

Crunch forward Gemel Smith has pushed his scoring streak to eight games, which eclipses his seven-game streak from earlier this season as a new career high. The center tallied two more assists Wednesday at Rochester for his third multi-point outing during the streak. He has 11 points (4g, 7a) during this run, which is the second-longest active streak in the league.

Defenseman Phil Myers, who was assigned to the Crunch by the Lightning late last week, made his Crunch debut in Wednesday’s win over the Amerks. He finished the game with two shots and a plus-1 rating.

Myers, 25, was acquired by the Lightning this summer in a trade with the Nashville Predators. He has three points in 11 games so far this season with the Lightning. Now in his fifth pro season, Myers has seen AHL action for the Lehigh Valley Phantoms (2017-20) and the Toronto Marlies (2021-22), totaling 125 games with 65 points. He finished last season with the Marlies, tallying seven points (2g, 5a) in 16 games.

The Crunch made a flurry of transactions yesterday.

They recalled goaltender Jack LaFontaine from the ECHL’s Orlando Solar Bears. LaFontaine, 24, has a 4-5-1 record with a 3.34 goals-against average and a .905 save percentage in 11 games this season for Orlando. This is his second recall to the Crunch this season and it comes on the heels of Max Lagace leaving Wednesday’s game with an apparent injury.

The Crunch also loaned defenseman Tyson Feist to the Solar Bears and forward Grant Mismash was reassigned by the Lightning to Orlando. Both players have skated in five games for the Crunch this season without logging a point.

The Crunch only had one power-play chance in Wednesday’s game at Rochester. It was the third time this season they’ve only generated one power play and they are 3-0-0-0 in those games. The 0-for-1 performance brought an end to the Crunch’s streak of scoring a power-play goal at four games. They rank 12th in the AHL with a 21.4% conversion rate.

The Marlies, who have scored a power-play goal in three of four games against the Crunch this season (4-for-16) rank third in the league at 29.0%.

The Crunch’s 5-for-5 penalty kill effort against the Amerks pushed the Crunch to 76.7% this season. The Marlies are right behind at 76.2%.