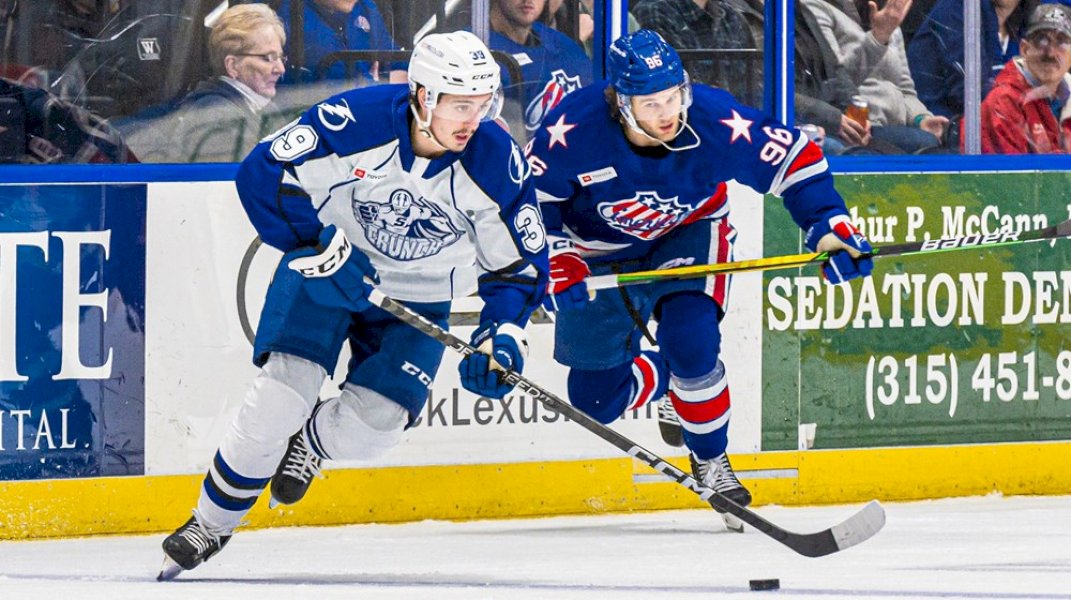 The Crunch play their final of three straight road games tonight against the Rochester Americans at Blue Cross Arena.

It is the fifth of 12 head-to-head matches this season and the third in Rochester. The Amerks have won three of the first four overall, including both at Blue Cross Arena.

The Crunch scored two goals in the third period to break a 1-1 tie and defeat the Toronto Marlies, 3-1, Saturday at Coca Cola Coliseum.

After a scoreless opening frame, the Crunch grabbed a 1-0 lead with a power-play goal early in the second period. Gemel Smith skated free down the left wall and sent a pass to Alex Barré-Boulet on the doorstep for his fifth goal of the season. The Marlies connected on a power play at 9:24 of the opening frame to level the score at one.

The game was tied late into the third period before Felix Robert broke the tie with his 10th goal of the season. Declan Carlile took a point shot that tipped off Shawn Element and ended up with Robert, who scored from the right circle at 14:17. Cole Koepke iced the game away with an empty-net goal to make it a 3-1 win.

The Crunch snapped their three-game losing streak (0-2-1-0) with their win over the Marlies. They are now back to 0.500 with an 8-8-2-2 record and they rank fourth in the North Division with 20 points.

Saturday’s win was their first this season when scoring fewer than four goals (1-7-1-0). That came on the heels of Friday’s 6-4 loss at Belleville, which was the team’s first loss in regulation (7-1-1-2) when scoring four goals or more.

Alex Barré-Boulet jumped back into a tie for the team lead with 26 points (5g, 21a) following his ninth multi-point game of the season. He is now all square with Darren Raddysh (8g, 18a), who had surpassed Barré-Boulet when he was on recall to Tampa Bay two weeks ago. The duo are tied for second in the AHL in scoring and Barré-Boulet paces all players with 21 assists.

The Amerks split a pair of games last week in Cleveland, and they went 1-2-0-0 during a three-game road trip that also saw a game in Lehigh Valley. Rochester is 3-2-0-0 over the last five games and all three wins have come in overtime. They are 4-2 in six games past regulation this season, including a 4-1 mark in games decided in the five-minute overtime period.

Linus Weissbach (8g, 7a) and Brandon Biro (5g, 10a) are tied for the Rochester lead in scoring with 15 points apiece. Weissbach’s eight goals are tied with Brett Murray for the team lead.

For the second time this season, Crunch forward Gemel Smith has pushed a scoring streak to seven games. The center tallied one goal and two assists in the two games last week to lead the Crunch in scoring.

He logged his fifth multi-point game of the season in Friday’s loss at Belleville; he notched the game’s opening goal and added an assist in their 6-4 loss to the Senators. The Toronto native picked up a primary assist on the Crunch’s first goal in their 3-1 win over the Marlies Saturday. That assist marked his 200th career AHL point.

Koepke, 24, earned a spot with the Lightning out of training camp and skated in 17 games with Tampa Bay to begin the season. He logged one goal for the Bolts. Koepke made his Crunch season debut Saturday in Toronto; he scored an empty-net goal and added four shots in the team’s win. Koepke led Crunch rookies with 20 goals last season and he finished with 39 points  over 69 games.

Myers, 25, was acquired by the Lightning this summer in a trade with the Nashville Predators. He has three points in 11 games so far this season with the Lightning. Now in his fifth pro season, Myers has seen AHL action for the Lehigh Valley Phantoms (2017-20) and the Toronto Marlies (2021-22), totaling 125 games with 65 points.

The Crunch have scored power-play goals in four straight games for the first time since opening the season with a goal in their first five games. They are 5-for-16 (31.3%) over the four games, bringing their total to 15-for-69 (21.7%) this season.

Rochester’s power play was held off the board in two chances against Cleveland to end last week. They have the exact same number of chances this season as the Crunch (69), but they’ve scored one more goal and carry a 23.9% success rate this season. They have scored 13 of their 16 power-play goals at home, and they have the league’s best home man advantage at 35.1%.