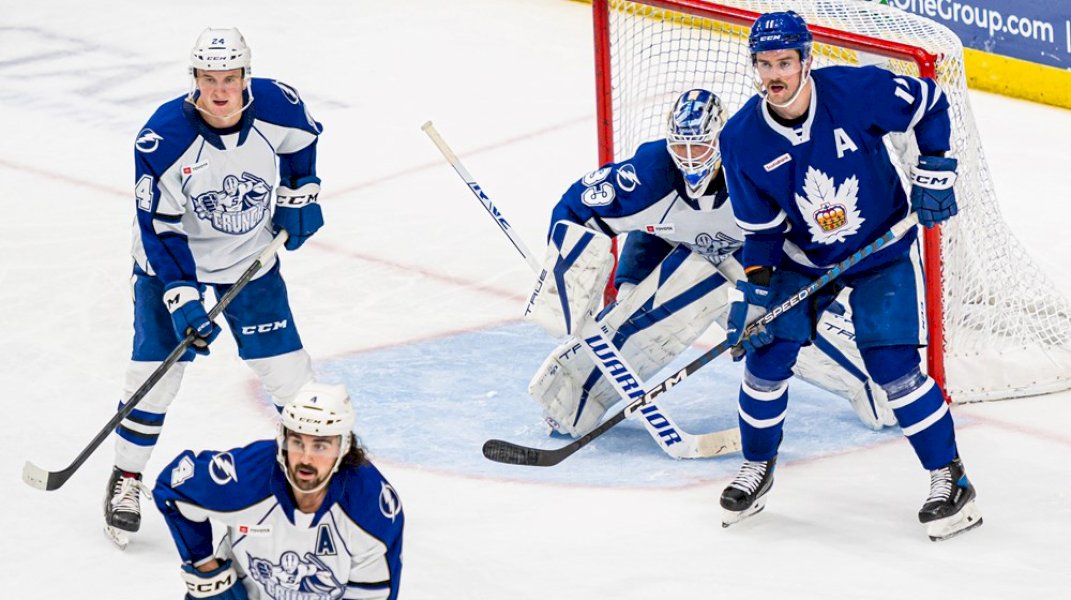 CRUNCH FACE OFF AGAINST MARLIES

The Crunch wrap up a two-game trip to Canada this afternoon as they take on the Toronto Marlies at Coca Cola Coliseum.

It’s the fourth game of the six-game regular season series between the clubs. The Crunch are 1-1-1-0 against the Marlies so far this season.

The Crunch let a 2-0 lead slip away in a 6-4 loss to the Belleville Senators last night at CAA Arena.

The Crunch came out strong and dominated the first 14 minutes to grab a 2-0 lead. Gemel Smith opened the scoring with a snipe from the right circle at 4:57 of the game. Jack Thompson followed up with a point shot for a goal and a 2-0 Crunch lead at 11:53. The Crunch were in control and maintained a 15-6 shot advantage until the Senators earned the game’s first power play. They racked up nine shots and Rourke Chartier scored on a rebound to make it 2-1.

Jarid Lukosevicius scored twice in the second period to put the Senators on top 3-2. He capitalized on a pair of Crunch turnovers to give Belleville the lead entering the third.

Jack Finley tied the game with a power-play goal 5:46 into the third period, but the Senators answered with another go-ahead goal 29 seconds later. Then Lukosevicius completed his hat trick two minutes after that for a 5-3 lead. Gabriel Dumont would snag one back for the Crunch, but the Sens added an empty-net goal for the 6-4 win.

The Crunch have now lost three straight games (0-2-1-0), and in the process had their three-game road win streak snapped last night. This is the third time this season the Crunch have gone on a winless spell of at least three games.

Last night was the first time this season the Crunch lost a game in regulation when scoring at least four goals. They had previously been 7-0-1-2 in those situations, while going 0-7-1-0 in games when scoring fewer than four goals.

Darren Raddysh extended his scoring streak to seven games with an assist on the game’s opening tally. He has posted 13 points (3g, 10a) during the streak, which is now tied for his career high (also March 25-April 15, 2021).

Raddysh, who has registered a point in 16 of his 18 games played this season, leads the Crunch and ranks second in the AHL in scoring with 26 points (8g, 18a). He is one goal shy and four points shy on matching his career highs in those categories.

The went on the road to begin a three-in-three weekend last night and scored a 4-3 win against the Utica Comets. The result leapfrogged the Marlies (12-6-1-0) back into first place 24 hours after they had dropped into second place behind Rochester. Toronto had lost three of its previous four, all in regulation, before the road win last night.

Now the Marlies come home to Coca Cola Coliseum, where they carry a 4-3-0-0 record; they have lost their last two home games to Abbotsford and Cleveland.

Logan Shaw paces Marlies skaters with 22 points (8g, 14a) in 19 games. He logged an assist in their win over the Comets. Noel Hoefenmayer stole the show for the Marlies, however, by scored a pair of goals and adding an assist for a three-point game.

In just his second start of the season Joseph Woll picked up his second win by making 19 saves on 22 shots. Woll is 2-0-0 and has stopped 39-of-43 total shots for a 0.907 save percentage. Erik Källgren, who has played in just one game for the Marlies this season, returned to the Marlies roster earlier this week. The Swede has played in 10 games this season for the Leafs, going 3-2-4.

For the second time this season, Crunch forward Gemel Smith has pushed a scoring streak to at least six games. The center picked up a goal and an assist last night to push his streak up to six games, one shy of the seven straight he scored in to begin the season.

Winger Cole Koepke has been loaned to the Crunch from the Tampa Bay Lightning. The second-year-pro earned a roster spot with the Lightning out of training camp, and he skated in 17 games for the Bolts, adding one goal. Koepke made his NHL debut in the season opener Oct. 11 at MSG against the Rangers. He became the 77th player to graduate from Syracuse to Tampa Bay during this affiliation.

The Crunch have scored power-play goals in three straight games for the first time since opening the season with a goal in their first five games. That streak ended against the Marlies in game six. Syracuse is 4-for-13 in the last three games and they are converting at a 21.2% clip this season.

They were only shorthanded twice last night, but surrender one goal to the Senators. The Crunch rank 22nd in the AHL at 75.3% on the penalty kill.

The Marlies went 0-for-3 on the power play last night in Utica, but they still possess the league’s second-best power play at 29.6%. They are also second on home ice (36.7%).

Toronto gave up a power-play goal last night against the Comets. The Marlies are 73.6% on the penalty kill.