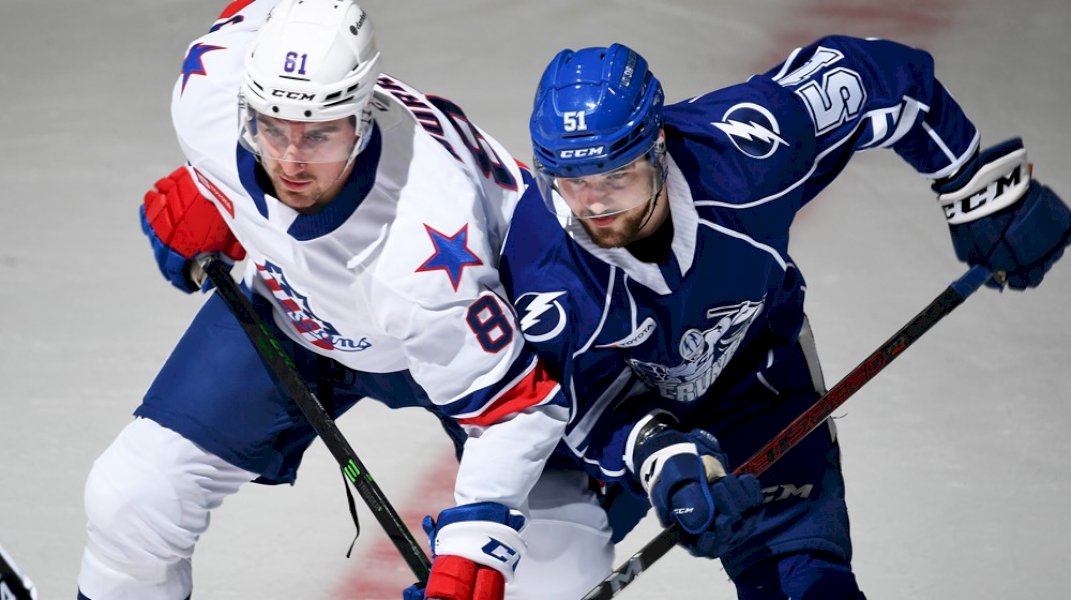 The Crunch snapped a six-game winless streak (0-4-1-1) with their 4-1 win last night against the Lehigh Valley Phantoms.

The Amerks enter with consecutive wins to begin the week, giving them victories in three of their last four.

Tonight kicks off a stretch of three head-to-head games in the next eight days.

The Phantoms scored first on a marker by Max Willman nine minutes into the game. The Crunch rattled off the last four goals, starting with Remi Elie’s equalizer late in the second period.

Syracuse broke the tie with three third-period goals. Otto Somppi deflected in his first goal of the season at 12:21. Just over a minute later, Gabriel Dumont doubled the advantage with his eighth goal of the year. Daniel Walcott put the game away with an empty-net goal.

Max Lagace turned aside 23 shots for his first win of the season.

Last night’s win snapped a six-game winless streak for the Crunch, who currently stand tied for sixth in the North Division at 6-7-2-1.

Tonight’s contest wraps up a three-game homestand for Syracuse. Prior to last night’s win, the Crunch fell to the Belleville Senators Wednesday. Syracuse is 3-4-0-1 this season when playing on home ice.

The Crunch are searching for back-to-back wins for the first time since Oct. 30, when they capped off a three-game winning streak on the road against Lehigh Valley.

Syracuse reached four goals in a game for just the fifth time this season; the club ranks 24th in the league with 2.75 goals per game.

Gabriel Fortier has been racking up the points lately. The forward most recently notched an assist last night against Lehigh Valley. The assist adds to a four-game point streak for the Quebec native (2g, 3a). The streak is the longest in his career; his previous high were multiple two-game runs. Fortier has already set a new career high with 11 points in 16 games.

Fortier has a chance to extend his individual point streak to five consecutive games tonight to set a season high for the team. Captain Gabriel Dumont had five points (4g, 1a) in a four-game stretch earlier this month.

The Americans sit third in the North Division with a 10-6-0-0 record. Rochester has won their last two games against the Utica Comets and Hershey Bears.

The Amerks offense has been red-hot, scoring 11 goals across two games this week. Rochester has been the best offensive team in the league all year, scoring the most goals (65) in the league.

The Americans have been led by two rookie scoring sensations this year: Jack Quinn and JJ Peterka. Quinn leads the league in points (22) and is tied for the lead in goals (10) through 16 games this season. Peterka is tied for fifth in the league for points (18) with Johnny Brodzinksi of the Hartford Wolf Pack and is second in the AHL for assists (14), four back of Scott Perunovich, who is currently up in the NHL with the St. Louis Blues.

Otto Somppi found the scoresheet last night against Lehigh Valley for the first time this season. The center was held pointless through five games played on the year until he struck with a deflected goal from the slot. The redirect put the Crunch up 2-1 in the third period and held true to be the game-winner.

Last season, Somppi was a key contributor adding 26 (12g, 14a) points in 32 games, the third-highest scorer on the team behind current Tampa Bay Lightning forwards Boris Katchouk and Taylor Raddsyh. This season, the Finnish forward is finding his footing after missing 10 games due to injury.

Forward Odeen Tufto has been added to the Crunch roster, and is expected to make his season debut tonight against Rochester. The Chaska, Minnesota native appeared in four games last year for Syracuse, but has missed the start of this season rehabbing from offseason surgery. The Quinnipiac product signed an entry-level contract as an undrafted free agent with the Lightning back in March.

Rochester’s power play has converted in five straight games and the Amerks matched a league-high with four tallies last night against Hershey. Overall they are third in the AHL at 23.8%, pacing the Eastern Conference. Their penalty kill ranks 17th in the league at 80.0%.

The Crunch are 1-for-6 on the man advantage in two games this week and are operating at 16.9% this season. Their penalty kill has moved back to first in the league at 88.7%.

As part of the night, the Crunch will wear lavender and black specialty jerseys during the game that will be auctioned off to raise money for the Upstate Cancer Center.

Fans can use the GiveSmart platform to purchase raffle tickets for specialty signed Hockey Fights Cancer™ nameplates and bid on other exclusive items with a portion of proceeds benefiting Upstate Cancer Center. Fans can view items and place bids by texting Crunch to 76278.