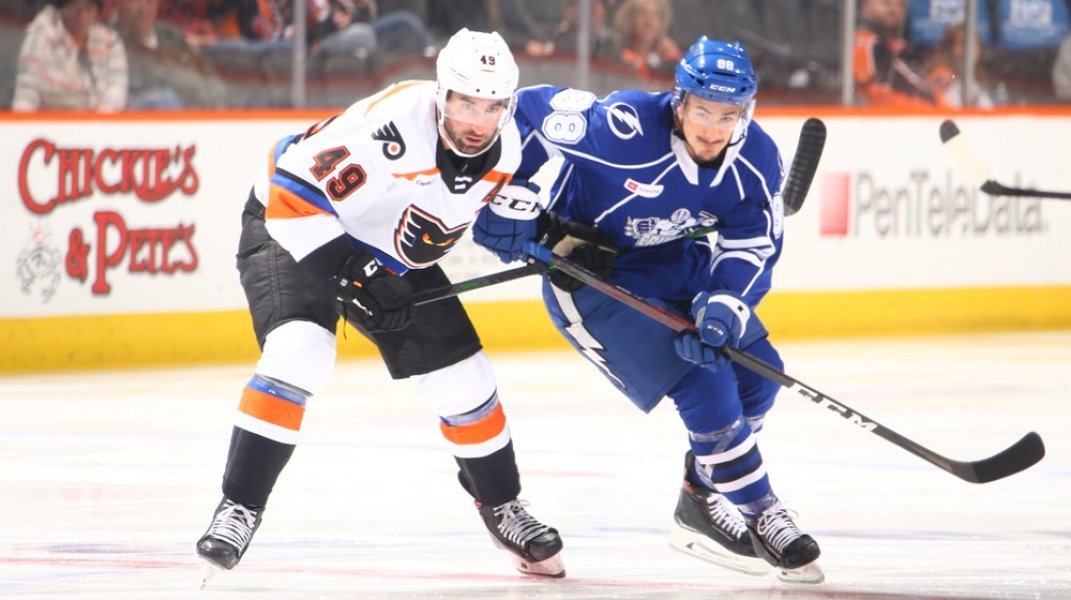 The Crunch contest the middle game of their three-game homestand tonight against the Lehigh Valley Phantoms.

The Crunch look to snap a six-game winless streak (0-4-1-1) as they close out the two-game regular season series against the Phantoms.

Lehigh Valley is saddled with a five-game winless stretch of its own, posting a 0-2-2-1 record since its last win Nov. 10.

The Crunch came up short against the Belleville Senators, 3-2, Wednesday night.

After starting goalie Amir Miftakhov was removed due to an injury just 6:34 into the game, the Sens struck twice in three minutes to grab a 2-0 lead at 10:15 of the opening period. Belleville added to the lead with a tally at 5:11 of the second period.

The Crunch’s attempted comeback started with a power-play goal by Gabriel Dumont later in the second period. In the third frame, the Crunch held a 21-2 shots advantage, but they only got one goal from Gabe Fortier and fell short, 3-2.

The Crunch sit seventh in the North Division with a 5-7-2-1 record. They are currently mired in a six-game winless streak. It’s their longest winless spell under head coach Ben Groulx; their last streak of six or more games without a win was a nine-game stretch (0-6-2-1) Jan. 27-Feb. 17, 2016.

Gabriel Fortier has had a strong, three-game stretch for the Crunch. The second-year forward tied his career high for points in a season (10) on Wednesday after scoring a goal and adding an assist against the Senators. Fortier scored 10 points in 30 games in his rookie year last year. This year, the forward reached the double-digit points mark in half as many games. Fortier is also on a three-game point streak (2g, 2a) for the first time in his career.

The Phantoms will be without their leading scorer tonight. Morgan Frost has scored 15 points (3g, 12a) in 16 games for the Phantoms, but he was called up to the Flyers Tuesday night.

The Phantoms come into play tonight with the worst road penalty kill percentage (71.9%) in the Eastern Conference. The Phantoms have allowed nine goals on 32 shorthanded opportunities on the road this season. Overall they are tied for 15th in the AHL with an 81.7% penalty kill, boosted by the conference’s top home kill (92.9%).

Gabriel Dumont scored a power-play marker Wednesday night, the team’s fifth home power-play goal of the year. The Crunch have converted 16.1% of their power-play opportunities at Upstate Medical University Arena this season, ranking 23rd in the AHL.

The Crunch sport the league’s second-best penalty kill, despite allowing a goal Wednesday night. Five of their six total power-play goals allowed have been at home; they have a 78.3% penalty kill at home versus a 96.4% success rate on the road.

Day was drafted in the third round by the Rangers in the 2016 NHL Entry Draft. He has played four seasons in the AHL with the Hartford Wolf Pack and Crunch, racking up 43 points (9g, 34a) and 74 penalty minutes in 106 games. This is his first career NHL recall.

Tonight is the Crunch’s Movember game presented by Upstate Urology.

As part of the night, signed mystery pucks will be sold on the concourse and on GiveSmart for $15. The pucks will feature a Crunch Movember logo, Upstate Urology logo and a player signature. To access the silent auction on GiveSmart, text “Crunch” to 76278.

Funds from the mystery pucks and silent auction will benefit the Prostate Cancer Care and Research Fund at Upstate.