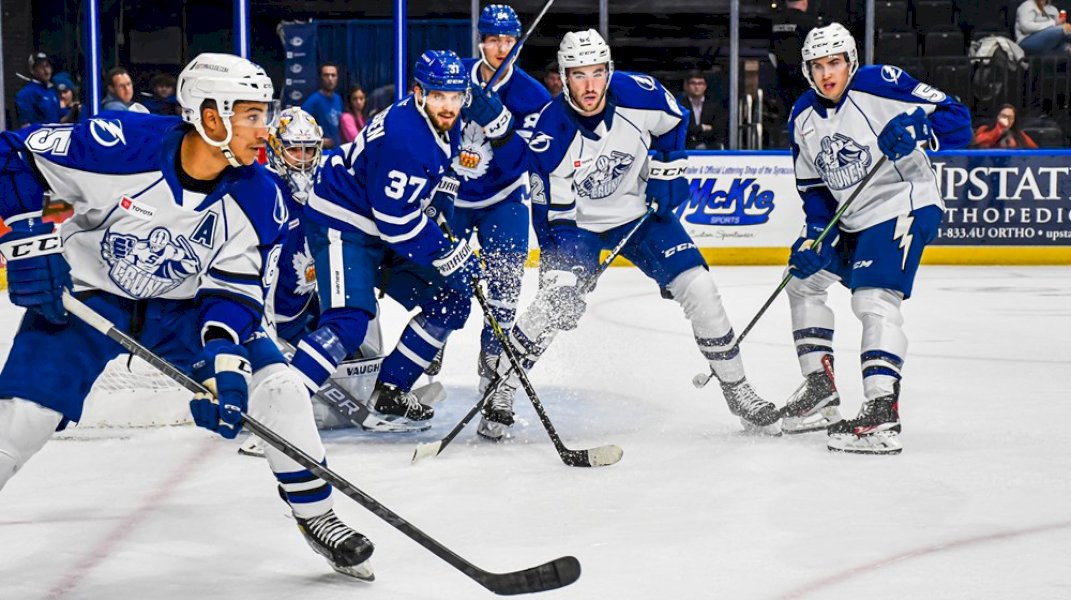 CRUNCH LOOK TO FEAST ON MARLIES

The Crunch play the first of three home games in four days as they host the Toronto Marlies at Upstate Medical University Arena.

It’s the third of six meetings between the Crunch and Marlies this season. The teams squared off twice in a three-day span in October with the Marlies grabbing two wins. Their previous match in Syracuse (Oct. 28) was decided in overtime. They will meet again next week in Toronto.

The Crunch scored four goals in a span of 4:11 early in the first period to defeat the Belleville Senators, 5-4, at CAA Arena Saturday.

The scoring spree began when Ilya Usau scored his first AHL goal 4:52 into the game. He stashed home a rebound just as a power play expired to make it 1-0. The Crunch made it 2-0 when Jack Finley buried a puck in the crease off a pass from Daniel Walcott 37 seconds later. Just over two minutes after that, Trevor Carrick blasted a power-play goal for a 3-0 lead, and Shawn Element capped the run with a slot-area deflection at 9:03 to open a 4-0 advantage.

The Senators attempted a rally, and they scored late in the first period to cut the lead to 4-1. An early power-play goal in the second period made it 4-2, but Daniel Walcott responded with his fifth goal of the season to build the lead back to three. The Sens added two more later in the period, but a scoreless third period preserved the Crunch’s fourth straight win.

Syracuse carries a four-game winning streak, which is tied for the longest active streak in the AHL. Last season, the Crunch had two winning streaks of four or more games; their longest was a six-game streak April 16-29.

Offensively, they have scored at least four goals in each game of this winning streak. They’ve totaled 22 goals in the four games, bringing their goals per game average up from 3.18 to 3.80, which ranks fourth in the AHL.

The Crunch (6-6-1-2) have wins in five of their last six overall to move up to fourth place in the North Division with 15 points.

Hugo Alnefelt has earned the win in the last two games. He is 3-2-1 in six games this season, with a 2.67 goals-against average and a .909 save percentage.

The Marlies lead the North Division with 21 points this season. They are 10-4-1-0, but they have lost two of their last three games following a 9-2-1-0 start to the season. Toronto has gobbled up points within the division; the Marlies are 7-2-0-0 in nine games against North Division foes this year, including a 2-0-0-0 mark versus the Crunch.

Logan Shaw paces the Marlies in scoring with 19 points (7g, 12a) in 15 games in his first season with the organization. Joey Anderson is right on his heels, with 18 points (10g, 8a) in 15 games. He is one of six AHL players, including teammate Adam Gaudette, with 10 or more goals this season.

Keith Petruzzelli has seen the bulk of action in Toronto’s crease, posting a 7-2-0 record with a 2.87 goals-against average and a .905 save percentage. He has started both games against the Crunch this season.

The Crunch became the seventh AHL franchise to win 1,000 games with their win over the Senators Saturday in Belleville. They are the fourth active franchise with 1,000 wins, joining Hershey, Rochester and Providence.

Saturday’s victory over the Senators was also a milestone for Crunch head coach Ben Groulx. It was his 300th win as an AHL head coach, making Groulx the 24th head coach in AHL history to reach that mark.

Rookie forward Ilya Usau found his scoring touch in Week 6, contributing his first two career points. The 21-year-old earned his first AHL point with an assist in Wednesday’s comeback win over the Thunderbirds. He then scored his first AHL goal to open the scoring as the Crunch defeated the Senators, 5-4, Saturday.

Usau has two points in 13 games this season. He was signed by the Tampa Bay Lightning to a three-year, entry-level contract as an undrafted free agent in March.

Today is game three of the clubs’ six game season series in 2022-23. The Marlies scored five goals in the third period to beat the Crunch, 5-3, in Toronto Oct. 26. They then picked up an overtime win over the Crunch, 4-3, two days later in Syracuse.

Alex Barré-Boulet and Gemel Smith lead the Crunch in scoring, potting three points in the two games. Barré-Boulet posted a pair of goals in their overtime loss Oct. 28. Max Lagace got both starts in net.

Joey Anderson logged back-to-back two goal games against the Crunch for four points in the season series. He is tied with Noel Hoefenmayer (4a) for the most points for a player in the series. Rookie Nick Abruzzese has just one point in two games, but it was the overtime game-winning goal.