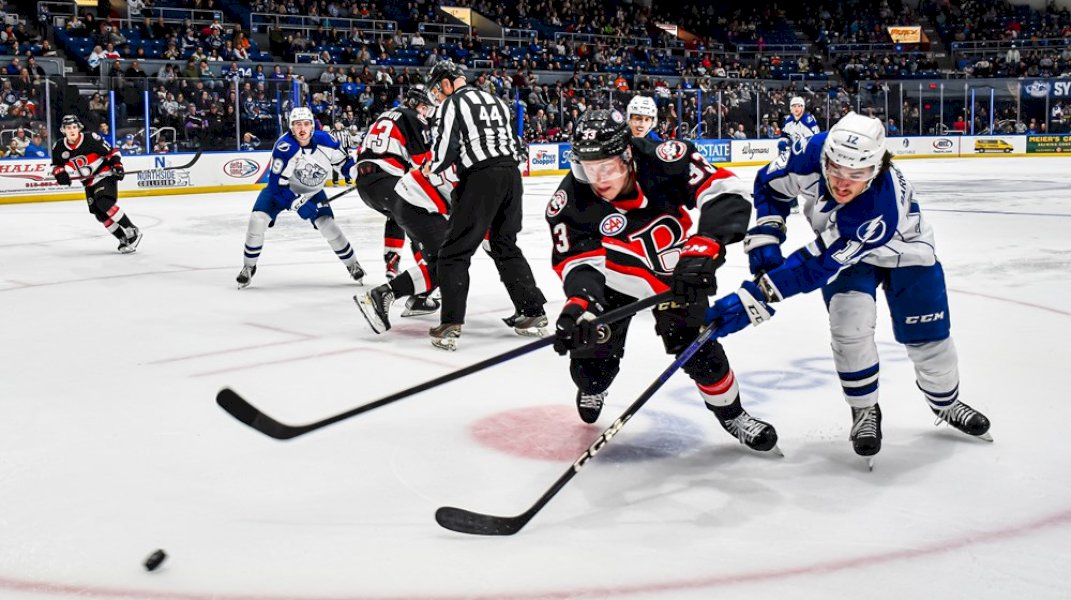 The Crunch arrive in Belleville in search of their fourth straight win as they face off against the Senators at CAA Arena.

It’s the second of six meetings between the Crunch and Senators this season. The Crunch’s three-game winning streak began last Friday with a home victory over the Sens, who have also won three straight games.

The Crunch rallied from a three-goal third period deficit to stun the Springfield Thunderbirds, 5-4, in a shootout Wednesday at MassMutual Center.

Syracuse trailed by three with less than 10 minutes to play in the third when Darren Raddysh ripped a one timer from the point while the Crunch’s net was empty. Exactly one minute later, at 12:40 of the third, Simon Ryfors scored off a setup by Ilya Usau to pull the Crunch within one. They finally tied the game with 2:49 to play when Declan Carlile score with a shot off a left circle faceoff win for the Crunch.

The game went into a shootout, and the Crunch got goals from Gage Goncalves and Gemel Smith to win the shootout, 2-1, and win the game, 5-4.

Syracuse carries a three-game winning streak into today’s game. The Crunch (5-6-1-2) also have wins in four of their last five overall and they are currently in fifth place in the North Division with 13 points.

The usual suspects contributed for the Crunch in their win Wednesday, with league-leaders Alex Barré-Boulet and Darren Raddysh picking up one point each. Barré-Boulet leads the entire league with 21 points (4g, 17a) and he has at least one point in 10 of the team’s 14 games this season. Raddysh leads AHL defensemen and ranks third to Barré-Boulet overall with 18 points (6g, 13a) in 13 games.

The Crunch’s win on Wednesday was their first in a one-goal game (1-2-1-2); there one of two teams (Chicago) without one prior to that game.

The Senators are in the midst of playing 15 straight games against North Division competition; today is the sixth game of that stretch. After losing the first two, the Senators have won the last three games, all at home, to improve to 7-6-1-0 this season.

Belleville earned is third straight win last night, 6-1, versus Toronto. Coupled with an 8-7 shootout win over Cleveland on Wednesday, the Senators have now racked up 14 goals in the last two games. They had scored 14 goals total in their previous six games (2-4-0-0).

Rookie Ridley Greig has led the offensive charge this week for the Senators. He has five points (2g, 3a) in the two games, and he now has 10 points (3g, 7a) in 10 games this season to lead all Belleville rookies. He ranks tied for third on the team overall, only trailing Jake Lucchini (16 points) and Egor Sokolov (14 points).

Antoine Bibeau has started all three games for the Senators since Mads Sogaard left last week’s game against the Crunch with an injury. Bibeau, who took the loss in Syracuse, is 3-2-0 with a 3.44 goals-against average and a .891 save percentage this season. Logan Flodell relieved him in Wednesday’s 8-7 shootout win, which was his first career AHL win in four appearances.

The Crunch’s dramatic third period comeback was the team’s first time overcoming a three-goal, third period deficit since Feb. 28, 2016 at Binghamton. The Crunch scored three goals to erase a 3-0 deficit, only to see the Senators score in the final minute to take a 4-3 lead. The Crunch found a way to tie the game again with less than 10 seconds to play, before winning in a shootout.

The last time they overcame a three-goal deficit with less than 10 minutes remaining in the third period was their comeback from 5-2 down with less than two minutes to go in the game against the Utica Comets on April 5, 2014.

The Crunch enter today’s game with 999 regular season wins in franchise history. With their next victory, the Crunch would become the seventh AHL franchise to win 1,000 games.

They are fourth among active AHL franchise in wins behind Hershey, Rochester and Providence.

Crunch games are always fun from start to finish, but there is a marked increase in action in their third periods. Through 14 games, the Crunch and their opponents have combined for 104 total goals (52 goals for and 52 goals against).

The Crunch’s 24 third period goals are the most by any team in a single period in the AHL this season.

GAGE GETTING IT DONE

Second-year pro Gage Goncalves continues to gobble up points for the Crunch. He carries a career-high five-game points streak (1g, 5a) into tonight’s match.