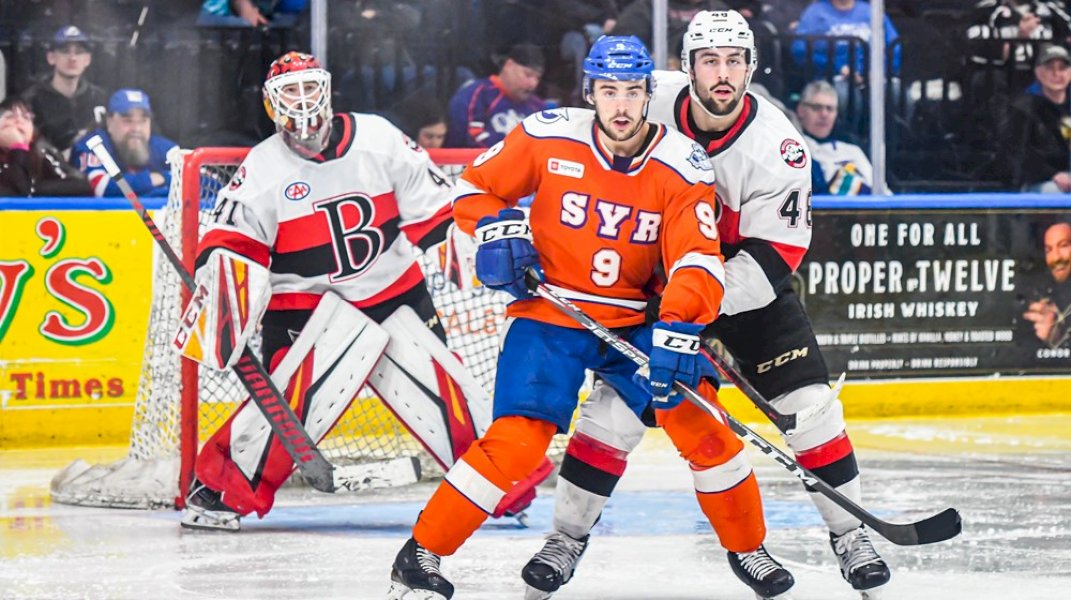 CRUNCH LOOK TO REBOUND VS. BELLEVILLE

The Crunch play the middle game of their three-game homestand tonight as they host the Belleville Senators for Military Appreciation Night.

It’s the first of six head-to-head matches this season. The teams squared off eight times in 2021-22; the Crunch captured five wins in the eight games.

Syracuse will wrap up the week tomorrow versus Utica while Belleville heads home to face Rochester.

Ethan Prow scored on a long-range shot 7:44 into the first period to give the Amerks a 1-0 lead. That score held until the third period.

The Crunch tied the game 1:44 into the third. Gabe Fortier received a pass from Gage Goncalves and ripped home his second of the season to level the score. The Amerks responded just over a minute later when Zach Berzolla’s turnaround shot slipped through to give Rochester a 2-1 lead. The Amerks sealed the win with an empty-net goal at 19:08 to earn their third win in four matches against the Crunch.

The Crunch enter today in the sixth spot in the North Division with a 2-6-1-2 record. It’s the middle game of their three-game homestand this week. After Wednesday’s 3-1 loss to Rochester, Syracuse has lost four of its last five in regulation.

Gabe Fortier scored the Crunch’s lone goal Wednesday night. It was his second tally of the season and it snapped a seven-game scoreless drought for the third-year pro. Fortier began the season in Tampa Bay, appearing in one game for the Lightning. He was loaned to the Crunch on Oct. 21 and he promptly scored a game-tying goal that night in Rochester. Fortier has two goals in nine Crunch games this season; he has 47 points (22g, 25a) in 115 career AHL games.

Belleville enters tonight’s contest at fourth place in the North Division with nine points, just two points ahead of Syracuse. The Senators last played against Toronto on Saturday, losing 5-2. Belleville has lost three of its last four games played, being outscored 19-9 in the process. Last season, the Sens were 1-2-1-0 on the road against the Crunch.

Jake Lucchini leads Belleville in scoring with 12 points (4g, 8a) in 10 games played. The forward has tallied points in eight of his 10 games. Lucchini’s team-leading production comes off the back of a personal best year last season. In his first season with the Senators, he posted a career-high and team-leading 51 points (20g, 31a) in 72 games played.

Another stalwart figure for Belleville is defenseman Lassi Thomson. The Fin leads his team’s defense with five points (2g, 3a) in 10 contests. Thomson had a three-game point streak (3a) snapped in Belleville’s loss to Toronto.

Mads Sogaard has appeared in four straight games for the Sens. He has a 1-2-0 record in those games; that is also his record through five games this season and he carries a 4.30 goals-against average and a .892 save percentage.

After missing last week’s road trip, Gemel Smith returned from injury Wednesday against the Amerks. The veteran was held off the scoresheet for the first time this season after starting the campaign with a career-best seven-game scoring streak. He has 10 points (3g, 7a) in eight games this season.

Forward Grant Mismash is expected to return to the lineup tonight for the Crunch. Mismash, 23, was injured in the Crunch’s season opener in Cleveland and has not played since. The University of North Dakota product was acquired by the Lightning in a trade with the Nashville Predators this summer. Mismash played his rookie season with the Milwaukee Admirals last year, tallying 12 points (6g, 6a) in 57 games.

Gabriel Dumont remains out with an injury suffered during the first week of the season.

The Crunch power play has been held off the board in the last four games, their longest drought of the season. They have gone 0-for-3 in each game, totaling an 0-for-12 drought. Despite that, the Crunch still feature a power play that is tied for eighth in the AHL at 22.9%.

After allowing a power-play goal in seven straight contests, the Crunch penalty kill has gone 7-for-7 in the last two games. Syracuse’s penalty kill is operating at 78.6%, which ranks 18th in the league.

The Senators have scored at least one power-play goal in eight of their 10 games this season. Their 56 man-up chances rank second in the AHL (Henderson, 59) and their 12 power-play goals are tied for third. They are tied for 15th with a 21.4% conversion rate.

Belleville has allowed a power-play goal in the last five games, including four Oct. 29 at Rockford. The Sens have been shorthanded more than any team (58) and they have the North Division’s top penalty kill (79.3%).

The Tampa Bay Lightning return to action tonight in a match against the Washington Capitals. The Lightning are off to a 7-5-1 start this season. Their 15 points have them in fifth place in the Atlantic Division.

Former Crunch defenseman Nick Perbix has found his way at the NHL level this season. Perbix is riding a two-game point streak coming off his first NHL goal, a game-winner against the Sabres last Friday. He also added an assist versus the Oilers last time out for Tampa. Perbix played in the Crunch’s opening two games; he was then called up to the Lightning and has played in 10 consecutive contests.