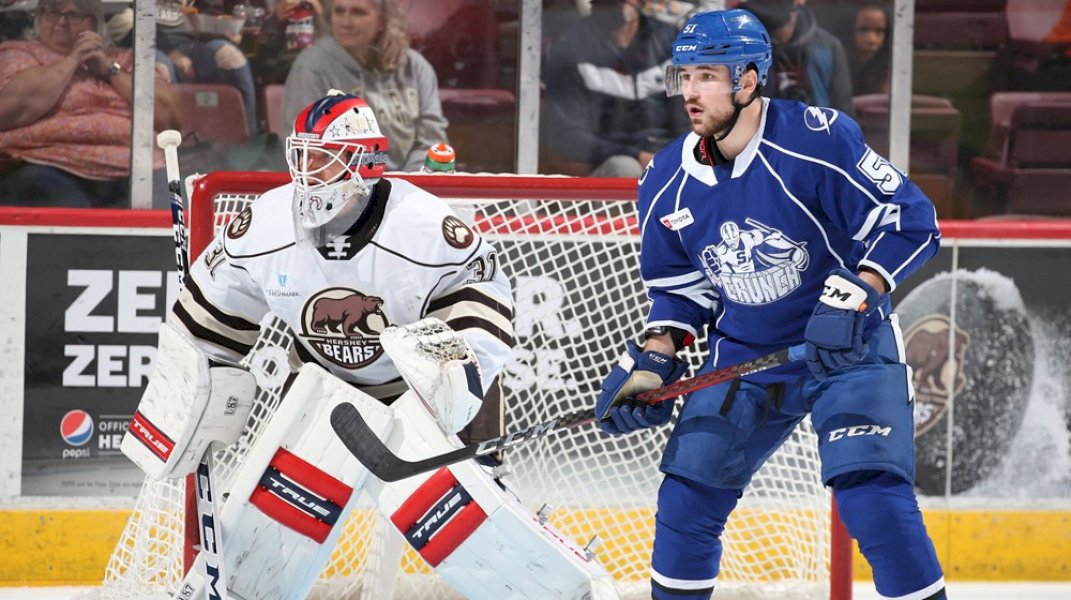 The Crunch hit the ice for their fourth home game in nine days as they host the Hershey Bears at Upstate Medical University Arena.

The Crunch (5-5-1-0) have lost back-to-back games to open the week and are just 1-3-0-0 to begin November. Syracuse has alternated wins and losses on home ice through the first five home games.

Hershey (5-3-2-1) enters the game following a three-game homestand during which the Bears went 1-2-0-0. They rank third in the Atlantic Division with 13 points.

The Crunch dropped their second straight game, 3-1, to the Utica Comets at the Adirondack Bank Center Thursday.

After a scoreless first period that saw the Crunch pepper 19 shots on goal, both teams broke through in the second period. Gabe Fortier opened the scoring at 12:16 of the middle stanza by firing home a shot from the bottom of the right circle on a pass from Jimmy Huntington. Utica answered back barely a minute later when A.J. Greer jammed home a puck near the crease to even the game 1-1.

The game remained tied until late in the third period before the Comets scored twice in a two-minute span. Fabian Zetterlund fired home a shot from the left circle to make it 2-1 and Greer scored his second of the game from the right circle for a 3-1 final.

The Crunch sit at 5-5-1-0 on the year after dropping three out of their last four games. During that stretch, Gabriel Dumont has been responsible for the bulk of Syracuse’s scoring. He’s notched four goals in the last five games and is tied for the team lead in points (6g, 3a) with Sean Day (1g, 8a). Dumont’s career-long four game goal streak was stopped Thursday.

Defensively, the emergence of rookie goalie Amir Miftakhov has helped keep the Crunch in games all season long. In five starts, Miftakhov has three wins and ranks 11th in the AHL in save percentage (.929) among qualified goalies. He has started three straight games for the Crunch.

Syracuse has scored the first goal of the game in six of its 11 games this year, but it hasn’t always been indicative of the result. Four of the Crunch’s five regulation losses this year have come when Syracuse scored first. That includes both midweek games against Bridgeport and Utica.

Gage Goncalves is responsible for two opening scores, with the Crunch splitting those games with one win and one loss. The other four opening scores came from the sticks of Gabriel Dumont, Gabriel Fortier, Tristin Langan and Jaydon Dureau.

The Bears currently sit third in the Atlantic Division with a 5-3-2-1 record. Hershey has played just three road games, the second-fewest in the Eastern Conference. The Bears are 1-1-1-0 away from Giant Center with their lone win coming Oct. 23 at Charlotte.

Mike Sgarbossa leads the team in scoring with nine points (5g, 4a) in 11 games. The last time the Crunch played the Bears, Sgarbossa was held scoreless in his 500th pro game; he was stopped on a late opportunity in overtime before the Crunch went the other way and won the game.

Pheonix Copley is likely to see his second game against the Crunch this season after suffering an overtime loss in their first meeting. He is 2-3-1 with a 2.98 goals-against average and a .890 save percentage. After posting a shutout in his NHL debut this week, former Crunch goaltender Zach Fucale was reassigned to the Bears today. Fucale had allowed just nine goals against in five games for the Bears this season, prior to his call up to the NHL.

The Bears and Crunch last played on Oct. 27. The Crunch won the game, 3-2, in overtime at the Giant Center. The Crunch battled back from a two-goal deficit to earn the win. Jimmy Huntington and Gabriel Dumont scored in regulation and Charles Hudon scored the game-winner in overtime to give the Crunch their second win of the season.

The win over the bears was Amir Miftakhov’s first career AHL win in his AHL debut. Miftakhov stopped 29 of 31 shots in the win. The overtime victory over the Bears also kicked off a three-game win streak for the Crunch.

THE BEARS RETURN TO SYRACUSE

The Bears return to Upstate Medical University Arena for the first time since Nov. 11, 2018. They were scheduled to play March 27, 2020, but that game was not played due to the 2019-20 season being cancelled amid the Covid-19 pandemic. Despite playing in the North Division, the Crunch and Bears did not play in the shortened 2020-21 campaign.

The Crunch defeated the Bears, 7-2, in their last match in Syracuse; no Crunch player from that game is on the roster today.

The Lightning are in action tonight against their cross-state rival Panthers. The Lightning currently sit fourth in the Atlantic division with a 6-3-3 record.

Former Crunch forward, Alex Killorn, has had a strong start to the season for the Lightning. The Halifax native has 12 points (7g, 5a) in 12 games and is tied with Steven Stamkos for the team lead in goals. Killorn played 44 games for the Crunch in the 2012-13 season, posting 38 points (16g, 22a).

The Crunch have been solid this year on special teams, ranking third in the North Division on the power play (19.6%) and second on the penalty kill (89.5%).

Syracuse has only allowed one power-play goal out of 12 opportunities in the last three games, but the Crunch haven’t been able to capitalize on their own chances. They are 0-for-7 combined in their two losses this week.

Lakers Fire Back at Red Dragons With 2-1 Win

UTICA SETS FRANCHISE RECORD FOR BEST START TO A SEASON