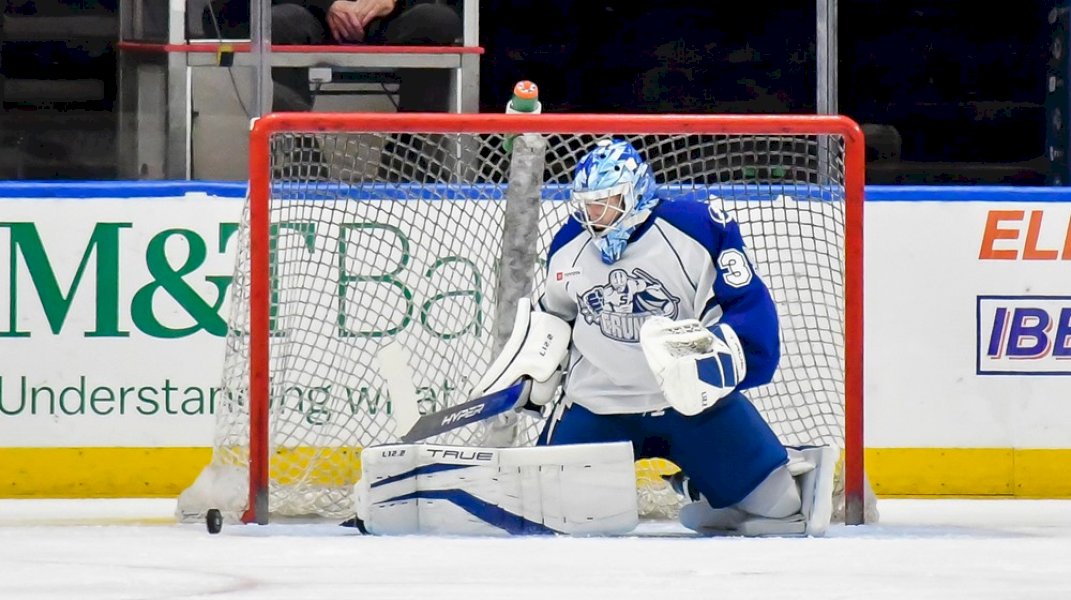 The Crunch wrap up their three-game homestand as they host the Bridgeport Islanders for Military Appreciation Night at Upstate Medical University Arena.

The Crunch (5-3-1-0) have split the first two games of the homestand with a loss against Utica Friday night before a 4-0 shutout win against Laval Saturday.

The Islanders (4-5-0-2) begin a five-game road trip tonight that continues in Laval Friday and Belleville Saturday. They enter tonight following a 3-2 win over Hartford Sunday in the final game of a three-in-three.

Syracuse struck first in the opening period by cashing in on the game’s first power play. Gage Goncalves fired a left circle shot that created a rebound, which was potted by Tristin Langan for his first AHL goal at 11:22.

The Crunch netted two goals in a 20-second span near the midway mark of the second period to build the lead. Daniel Walcott escaped on a partial breakaway and scored his first goal of the season at 8:17. On the ensuing play, Cole Koepke wired in a shot from the right circle to make it 3-0 at 8:37. Miftakhov turned aside 17 shots in the middle stanza to help the Crunch maintain that advantage.

Gabriel Dumont capped the scoring with an empty-net goal in the third period.

The Crunch enter today’s game with a 5-3-1-0 record, which is good for third place in the North Division with a .611 points percentage. It’s the final game of a three-game homestand in which the Crunch have split the first two games; they are looking to get above 0.500 at home for the first time this season.

Gabriel Dumont rides a three-game point streak into tonight’s match. He has also scored a goal in three straight games, which is tied for the longest active streak in the AHL. With three points (2g, 1a) last week, Dumont is tied for the team lead with eight points (5g, 3a) in nine games.

There are two other players tied for the team scoring lead with eight points. Both Charles Hudon (2g, 2a) and Sean Day (4a) also carry three-game scoring streaks.

Cole Koepke led the team in scoring last week with four points (1g, 3a) in two games. His back-to-back multi-point performances give the rookie seven points (2g, 5a) in seven games this season. He tallied three points (2g, 1a) in nine games last year after finishing his career at Minnesota-Duluth.

The Islanders kick off a season-long five-game road trip which also takes them to Laval, Belleville, Hartford and Springfield. Bridgeport is winless (0-3-0-2) in five road games in 2021-22; the Islanders have been outscored 18-10 on the road and they have been held to just one goal in three of their five games.

Otto Koivula, now in his fourth season in Bridgeport, leads the Islanders with 10 points (2g, 8a) in 11 games. He has logged at least one point in all but three Bridgeport games this season. His +4 rating also paces the club. Koivula has 87 points (34g, 53a) in 136 career AHL games.

Arnaud Durandeau ranks second on the Islanders with nine points (2g, 7a) in 11 games. He has five points in his last five games following a three-point outing (1g, 2a) in their 3-2 win Sunday against Hartford.

Goaltender Jakub Skarek has appeared in seven of their 11 games this season. He carries a 4-1-1 record with a 2.79 goals-against average and a .906 save percentage. He turns 22 years old today.

Tonight is the first two regular season matches between the Crunch and Islanders. It’s the first time the clubs have met since the 2019-20 season, when the Crunch took three-of-four from the Bridgeport Sound Tigers.

The Crunch won 5-1 and 5-2 in their two home games against Bridgeport that season with the last Bridgeport visit to Syracuse coming Dec. 7, 2019.

Andy Andreoff spent the 2018-19 season in Syracuse when he posted a career-high 55 points (26g, 29a) in 75 games. An assistant captain with the Crunch, Andreoff helped the team capture the 2018-19 North Division title.

Richard Panik spent two seasons with the Crunch at the start of the team’s affiliation with the Tampa Bay Lightning. Panik posted 41 points in 51 games in 2012-13 before adding another 11 in 13 games during the 2013-14 season. Panik helped the Crunch reach the 2013 Calder Cup Finals with 14 points in 16 playoff games.

Rookie goaltender Amir Miftakhov earned his first shutout in North America by making 29 saves in Saturday’s 4-0 win over the Laval Rocket. With that performance, Miftakhov became the first Russian-born Crunch goaltender to post a shutout since Andrei Vasilevskiy in a 4-0 win over Binghamton Dec. 18, 2015.

Veteran defenseman Andrej Sustr returns to the Crunch following his reassignment from Tampa Bay. Sustr has spent the beginning of the season with the Lightning where he has appeared in eight games-netting one goal-in his first year back with the organization since 2017-18.

In an unrelated transaction, the Lightning also reassigned forward Alexey Lipanov to ECHL-Orlando.