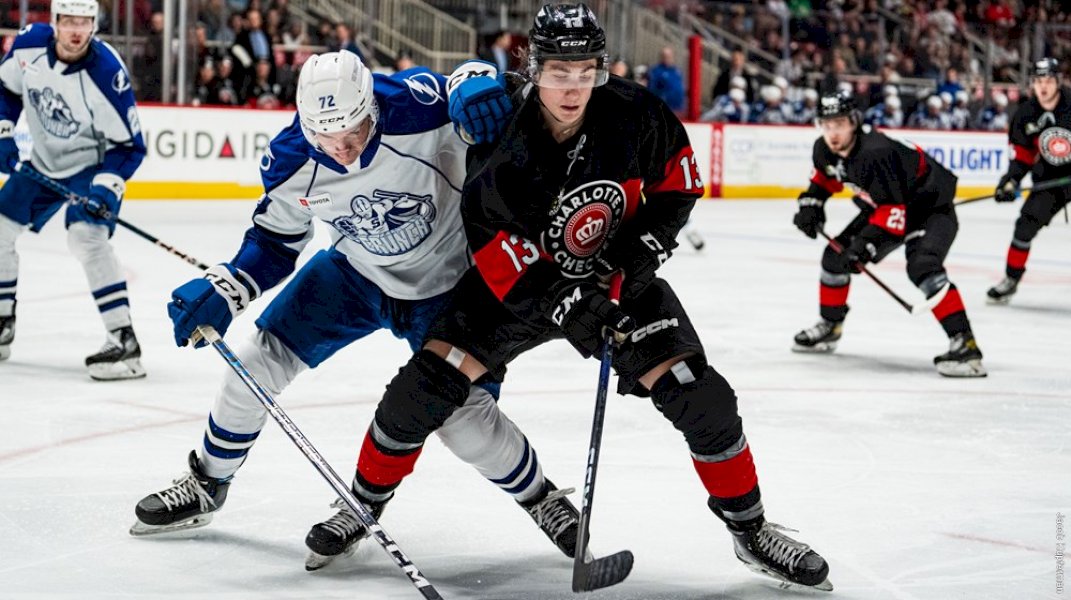 It’s the second game of a four-game regular season series between the teams. The Checkers come to Syracuse for back-to-back games Feb. 3-4.

Zac Dalpe scored twice and the Checkers slipped past the Crunch, 3-2, last night at Bojangles Coliseum.

After a scoreless first period, Dalpe opened the scoring with a power-play goal 18 seconds into the second period. He received a pass and rushed in on a partial breakaway before scoring on a backhand to make it 1-0 Checkers. Charlotte doubled the lead with another power-play goal at 12:35, with Logan Hutsko scoring after a failed Crunch clear ended up on his stick near the front of the goal.

The Crunch got to even terms near the midpoint of the third period. With the teams skating 4-on-4, Darren Raddysh flicked home a backhand goal at 9:35 to make it a 2-1 game. Just 12 seconds later on the ensuing faceoff, Simon Ryfors tied the game, bursting through the slot to beat Alex Lyon at 9:47.

The Checkers re-claimed the lead less than three minutes later. Gerry Mayhew looped behind the Crunch net and found Dalpe on the backdoor for his second goal of the game, giving the Checkers the lead for good.

Max Lagace made 28 saves for the Crunch while Alex Lyon stopped 25 for Charlotte.

The Crunch have lost their last five games, including four in regulation (0-4-1-0) to sink to 1-5-1-2 this season. With five points, they are tied with Utica for the fewest in the North Division. The Crunch have the fewest wins in the AHL.

Syracuse has stumbled out of the blocks on the road this season, with the team’s winless streak up to six games (0-4-0-2) to begin the campaign. Outside of Wednesday’s 7-2 loss, however, the Crunch have had a chance to win every road game. Four of the six road defeats have been by just one goal and a fifth (Oct. 26 at Toronto) was a one-goal game until the Marlies added a late empty-net tally. This is the Crunch’s longest road winless spell to start a season since 2006-07 (0-6-0-1); overall the Crunch started 2-10-0-1 that season before rallying to finish with a 0.500 record.

Defenseman Darren Raddysh scored his fourth goal of the season last night. It gives Raddysh a point in eight of the team’s first nine games and extends his scoring lead among AHL defensemen with 12 points (4g, 8a). Raddysh is tied with Alex Barré-Boulet for the team lead in scoring, making Raddysh one of five AHL defensemen to be tied or lead their respective club in scoring.

The Checkers finish their quick two-game homestand before heading back on the road for a six-game road trip next week. At 5-1-1-1, the Checkers are in fourth place in the Atlantic Division with 12 points.

Charlotte is one of two teams (Rochester) with a 5-0-0-0 home record so far this season. Last night was their fourth one-goal game on home ice. The Checkers are now 17-0-3-0 in their last 20 regular season home games; their last regulation home loss was Feb. 11 vs. Bridgeport.

With two goals and a fight, captain Zac Dalpe jumps into a tie with Riley Nash and Logan Hutsko for the Checkers scoring lead with seven points. Dalpe leads the way with five goals in just six games while Hutsko (4g, 3a) and Nash (2g, 5a) have both skated in all eight games for the Checkers.

Last night marked the return to Charlotte for Crunch defenseman Trevor Carrick, who played for the Checkers over five seasons. He is the franchise leader in games played with 347, and he compiled 181 points (40g, 141a) to rank third in Checkers history.

Carrick skated for the Checkers from 2014 to 2019, culminating with a Calder Cup Championship in 2019. He produced 12 points (3g, 9a) in 16 playoff games that season and he scored two goals during the Calder Cup Finals, including one in the Checkers’ cup-clinching win in Game 5.

Crunch forward Felix Robert is set to appear in his 100th career AHL game tonight in Charlotte. The third-year pro is in his first season with the Crunch after beginning his career with the Wilkes-Barre/Scranton Penguins.

In 90 games for the Penguins, Robert netted 47 points (22g, 25a), including 34 points in 63 games last season. So far in nine games with the Crunch, the Lambton, Quebec native has 11 points. He ranks third on the team in scoring while his six goals are tied for the team lead with Simon Ryfors.

Simon Ryfors scored the Crunch’s second goal last night to push him back into a tie for first on the team’s goal scoring list with six. Ryfors has scored a goal in every other game for the last five games; he scored three goals over the first two games of the season Oct. 14-15 at Cleveland.

In his second season with the Crunch, the Swede has nine points (6g, 3a) in nine games. He finished his first North American season with 35 points (11g, 24a) in 72 games last year.

The Crunch allowed two power-play goals last night and they have now allowed at least one in the last seven games. Their penalty kill ranks 25th at 74.3%. The Crunch power play was 0-for-3 last night and is just 1-for-13 in the last four games. Despite that, they still rank fifth in the AHL at 27.6%.