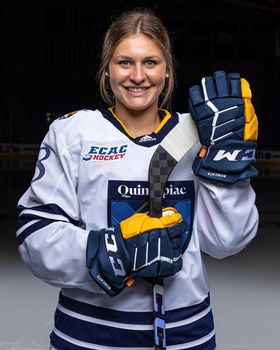 Former Clinton Warrior standout Mia Lopata, a sophomore for the number eight ranked Quinnipiac Bobcats achieved a pair of milestones in her hockey career this past weekend. On Friday, September 23rd she played her first collegiate game against the Maine Black Bears, and the next day she recorded her first collegiate point in a game against the same opponent. The point was a primary assist, as she sent a pass up the boards to Nina Steigauf, who scored a goal on a two-on-one opportunity that gave the Bobcats a 1-0 first-period lead. Quinnipiac would go on to win the game by a score of 3-0, with Lopata finishing the game a +2 and recording three shots on goal as well.

Although she is a sophomore at Quinnipiac, last Friday was her first collegiate game because she was a red shirt for her first season.

Lopata, who plays defense for Quinnipiac, but spent time at forward and defense in high school, had an excellent career playing for the Clinton Warriors Girls Varsity Hockey Team. She was a two-time Section III Player of the Year and was also the captain of the Clinton team that won the state Championship in 2020. She totaled seventy-one points during her high school career (forty-four goals and twenty-seven assists).