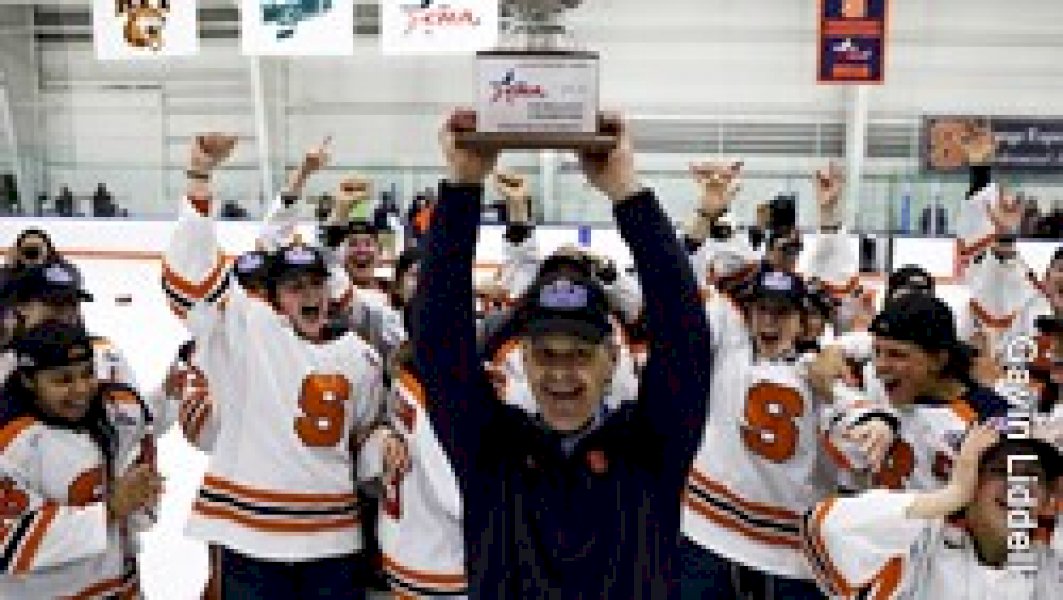 The only head coach in Syracuse hockey history, Paul Flanagan built the Orange program from the start. Today he announced his retirement after 23 seasons as a head coach and 38 years in the sport as a player and coach in the collegiate ranks. A four-time CHA Coach of the Year at Syracuse, Flanagan has a 434-308-73 career record, including 204-225-49 at Syracuse. He came to Syracuse University in March 2008 when the University launched the program and developed Syracuse from an upstart to a perennial contender in College Hockey America (CHA).

“I am very grateful for the opportunity Syracuse University gave me 14 years ago to build a Division I women’s ice hockey program here,” Flanagan said. “Working alongside so many experienced coaches and capable staff members has made coaching in our athletics department a wonderful and very rewarding experience. Our program has been blessed with many excellent coaches whom I thank for their friendship and professionalism. I am particularly indebted to my longtime assistants Ali Domenico and Brendon Knight. They have both served our program for extended periods and helped me immeasurably through the years. Brendon, our current associate head coach, deserves much of the credit for our recent successes. He has been a great friend to me and such a positive influence on our program during his 10 years here. Although we only worked together for one season, I will miss our first-year assistant, Claudia Kepler, greatly and thank her for her enthusiasm and knowledge of our sport. As for all the student-athletes who have passed through the doors of Tennity Ice Pavilion, I thank each of you for your hard work, passion and dedication to our program. I feel fortunate for the friendships we’ve made and will continue to follow your successes in life.

“Lastly, I thank my wife, Sharon, and my children, Shannon, Brendan and Connor for all of their support allowing me to always chase my dream for the coaching profession.”

One of the winningest coaches in the history of collegiate women’s hockey, Flanagan guided the Syracuse to two NCAA Tournaments, two CHA Tournament Championships and one CHA Regular Season Championship. Flanagan, who won the 2001 AHCA Coach of the Year Award as the St. Lawrence head coach, earned his 400th career win on January 18, 2020, becoming the seventh collegiate coach to achieve that milestone.

“Paul built our ice hockey program from its infancy into a perennial CHA contender and guided our teams to the NCAA Tournament,” said Director of Athletics John Wildhack. “His leadership and commitment to the academic and athletic success of his student-athletes was stellar throughout his tenure. Paul is highly respected on and off the ice for his success as a player, coach and advocate for women’s hockey. We are grateful for his dedication and commitment to Syracuse University and our hockey program. We wish Paul and his family all the best.”

Knight will serve as the program’s interim head coach while the University conducts a national search to replace Flanagan.

The 2021-22 CHA Coach of the Year, Flanagan led the Orange to the program’s second NCAA Tournament appearance after the winning the CHA regular season and tournament championships for the first time in history. Syracuse won the Battle at the Burgh championship and a closed the season with a 9-2-2 mark in the final 13 games. Flanagan was one of seven finalists for the American Hockey Coaches Association (AHCA) Division I Women’s Ice Hockey Coach of the Year Award.

Flanagan has guided the Orange to the CHA Championship game in nine of his 14 seasons and to winning seasons in the CHA in 11 of 14 years, including the last 10 in a row.

During the summer of 2008, Flanagan was an assistant coach for the U.S. Women’s Select and National teams that competed at the Four Nations Cup in Sweden and won the gold medal. Flanagan, coaching alongside Ohio State’s Jackie Barto and Plattsburgh State’s Kevin Houle, also assisted the U.S. Women’s National Team to the World Championship.

Before coming to Syracuse to start the program, Flanagan was the head coach for the St. Lawrence women’s ice hockey program from 1999-2008, leading the Saints to the women’s NCAA Frozen Four Championship five times in his nine-year tenure, which tied him for the most appearances in the country. Flanagan’s four-year run (2003-07) of Frozen Four appearances also tied for best in college hockey.

The Canton, New York, native accrued a 230-83-24 record with the Saints. While at St. Lawrence, he directed his fleet to the ECAC Hockey Tournament in each of his nine years. At SLU, Flanagan mentored 10 All-Americans, three ECAC Goaltenders of the Year, one ECAC Player of the Year, two Sarah Devins Award Winners and more than three dozen ECAC All-Stars. He coached two Olympians and several members of the Canadian National team.

Before taking the reins of the SLU women’s program in 1999, Flanagan served as an assistant coach for the Saints men’s team for 11 years, helping guide the program to two ECAC championships and NCAA appearances in 1989, 1992 and 1999. His first coaching position was as the head coach at Canton High School in 1982, where he directed the program for six years.

Flanagan was tabbed a ‘Legend of Appleton’ by St. Lawrence in December 2018. The honor celebrates the legends who helped build the hockey tradition at St. Lawrence through their play, commitment, and impact on the programs and on the hockey world.

Flanagan earned his master’s degree in education from St. Lawrence in 1992.