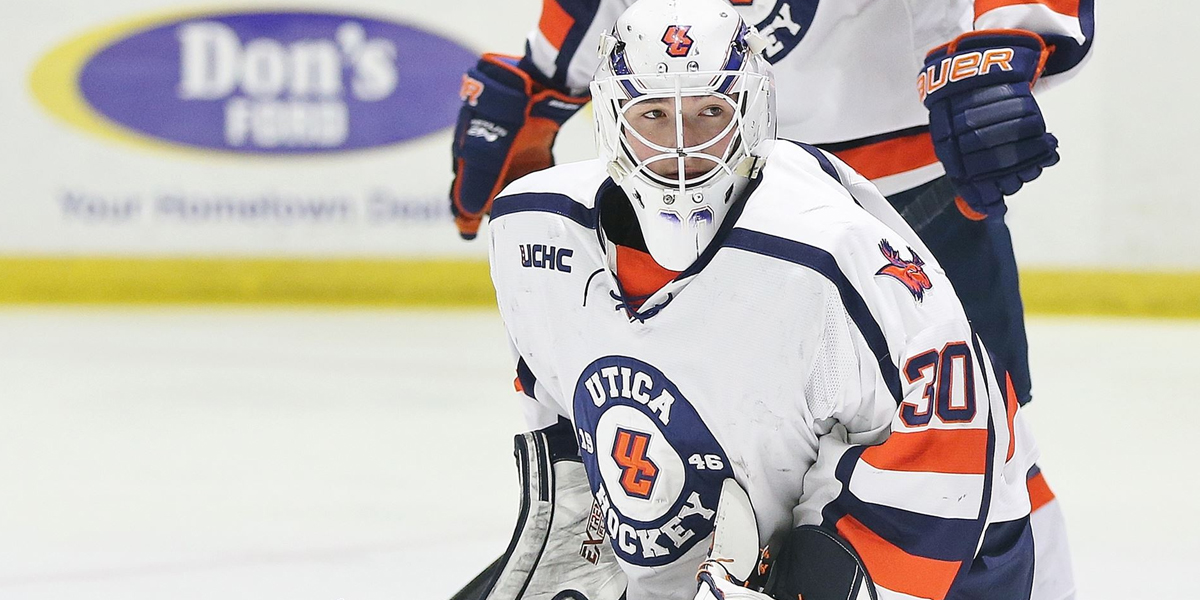 The last time the Utica College Pioneers played in the UCHC tournament quarterfinals was in 2016. They have had byes for the past four years as the top seed. Due to this year being “non-traditional,” a non-traditional tournament will be played.  The UCHC decided to do a single elimination tournament with the top eight teams qualifying and no byes. That meant that #1 seed Utica hosted winless #8 seed Manhattanville on Wednesday night at the Adirondack Bank Center.

The first period ended with no score. The neutral zone saw plenty of physical play and there were many scoring opportunities for the Pioneers. The Valiants’ goalie, Alexei Masanko (Don Bosco Prep), stopped the 17 shots he faced and Sean Dickson (Hampton Roads Whalers) stopped the two he saw from the Valiants.

The Pioneers broke free from the neutral zone like the Ever Given from the Suez Canal in the second period.  Freshman forward Dylan McMahon (Kanata) scored his first goal of the night at 5:28. He deflected Blake Holmes’ (Minnesota Wilderness) shot. It rebounded off of Masanko, but he was able to push it past Masanko’s left leg. Conor Landrigan (Binghamton Jr. Sens) was credited with the secondary assist. Landrigan would assist with the Pioneers’ next goal at 13:17. The Pioneers were on the power play when Brandon Osmundson (Hampton Road Whalers) got it to Landrigan. Landrigan saw defenseman Jayson Dobay (Youngstown Phantoms) at the point and passed to him. Dobay took advantage of the traffic in front of the net by driving to the net to surprise Masanko. At 15:09 is when Buster Larsson (Syracuse Stars) continued his point streak. Brett Everson (Hawkesbury) won the faceoff and got it to the big guy from Sweden. Larsson’s shot went wide of the net. Holmes picked the puck from the boards and saw Larsson at the top of the slot. Larsson’s powerful shot knocked Masanko’s water bottle into the air to make it 3-0 in favor of the Pioneers. John Moncovich (Hampton Roads Whalers) scored two goals in the remaining three minutes of the period. At 17:07 Jamie Bucell (Philadelphia) passed to Nick Yzaguirre (Charlotte Rush) who passed to Moncovich who took a quick shot from right in front of the crease. Masanko thought it was under his glove, but the puck trickled into the net behind him. At 19:19 Moncovich proved his first goal was no fluke. On another power play opportunity, Justin Allen (Rochester Monarchs) passed the puck to Osmundson whose shot went wide. Moncovich got the rebound from the boards and shot a wrister from the bottom left circle. Masanko was out of position and that goal put the Pioneers up by five at the end of the second period.

The Pioneers continued to use the power play advantage and their rebounding abilities in the third period. The Pioneers were on another power play when Allen got the puck to Bucell. Everson caught Bucell’s rebound off the goalie’s pads and lit the lamp at 5:59. Captain Landrigan would score the next two Pioneer goals. At 9:47 a tenacious Joey Berkopec (Coquitlam Express) stole the puck and passed to a fast Osmundson, who passed it to Landrigan. Landrigan skated behind the Valiants’ net and scored over Masanko’s blocker hand from a physically impossible angle.  It should be on SportsCenter’s top plays segment. Seven was an unlucky number for Masanko. He ended his night with 31 saves. Landrigan didn’t take it easy on the Valiants’ replacement goalie, Mac Vail (Baccalaureate School for Global Education). At 13:29, while on a power play, he got it past Vail. Dante Zapata (Austin Bruins) and Dobay were credited with the assists. McMahon decided that since he started the Pioneers’ scoring spree, he would be the one to end it. Thirty seconds after Landrigan’s second goal, he scored the ninth and final goal of the night with a wrister on the glove side off of the post. Brendan Schultz (Topeka) and Vaden McManus (Hampton Roads Whalers) got their points for the night with their assists. Vail had 0 saves for the night.

Who says zero isn’t a positive number? Dickson saved all 12 shots he took Wednesday night. With that shutout, he broke the Pioneers’ record of three shutouts in a single season. Another impressive number is that this is his fourth shutout in six starts this season.

The Pioneers will host #4 Elmira at 7pm on Friday. Since Governor Cuomo is allowing fans into collegiate games as of April 2nd, the Pioneers will have family members cheering them on in the semifinals.