First Place on the Line at Penn State 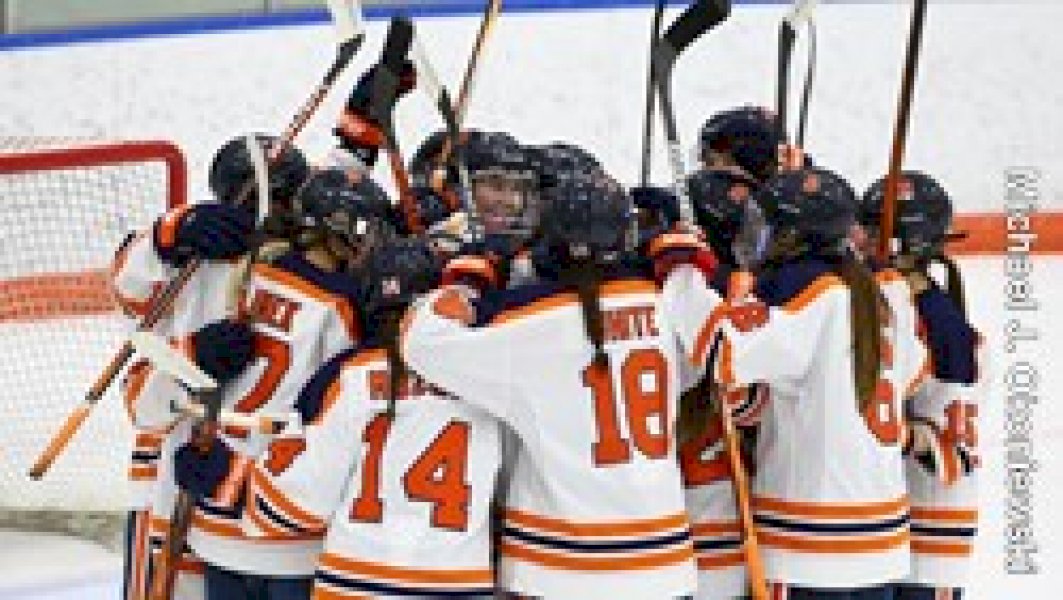 A battle for first place in the College Hockey America standings is on the line this weekend. Syracuse will travel to Penn State for a two-game series on Friday, February 4th (6 p.m.) and Saturday, February 5th (2 p.m.) at Pegula Ice Arena.

This is the 42nd meeting between the teams with Syracuse leading the series 29-5-7. In November, ‘Cuse split the series with the Nittany Lions where graduate student Victoria Klimek recorded a hat-trick to lead the Orange to a victory. Live stats will be available for both games on Cuse.com.

Syracuse’s win against Lindenwood on Saturday, Jan. 29 was the 200th in program history and for head coach Paul Flanagan at Syracuse. Flanagan, who also coached at St. Lawrence for nine years, has 430 career victories. Flanagan became Syracuse’s head coach in 2008-09 when the program was launched.

Senior Abby Moloughney owns the Syracuse record for games with three or more points. She has 28 multi-point games in her Orange careeer.  She has eight multi-point games in 2021-22, which ties for fourth on the single-season record list. Graduate student Jessica DiGirolamo set the Syracuse record for career assists by a defenseman with a pair of helpers against Lindenwood on Jan. 28. She now holds the SU records for goals (32), assists (59) and points (91) by a defenseman.

Syracuse (11-9-5 overall, 9-3 CHA) celebrated Senior Day last weekend with a sweep against Lindenwood and recorded the program’s 200th win. The Orange had six different players score in Friday night’s 6-1 win and graduate student Victoria Klimek scored the game-winning goal for the Orange in a 4-3 on Saturday. Goaltender Allison Small recorded a season-high 35 saves in the second game.

ORANGE IN THE OLYMPICS

Akane Hosoyamada ’15 is playing for Team Japan in the 2022 Olympics in Beijing. It is her second Olympic games with Team Japan. A two-time College Hockey America selection, Hosoyamada served as a Syracuse captain in 2014-15. She also earned academic recognition on the 2015 CHA All-Academic Team. Hosoyamada tallied an assist in Japan’s 3-1 opening game victory against Sweden on Feb. 3. Team Japan plays again on Feb. 5 against Denmark at 3:40 am ET. This is the fifth Winter Olympic games with a Syracuse presence. Stefanie Marty ’11 played for Switzerland in the 2006, 2010 and 2014 Olympic Games. Marty,  made history as Syracuse Athletics’ first Winter Olympian. At Syracuse Marty was a two-time captain and an alternate captain in her three years wearing the Block S and still ranks among the top 10 goal scorers in program history. She earned 2011 CoSIDA Academic All-District honors.

The Orange will travel to Mercyhurst for their last series in the regular season on Friday, Feb. 11th (3 pm) and Saturday, Feb. 12th (2 pm).