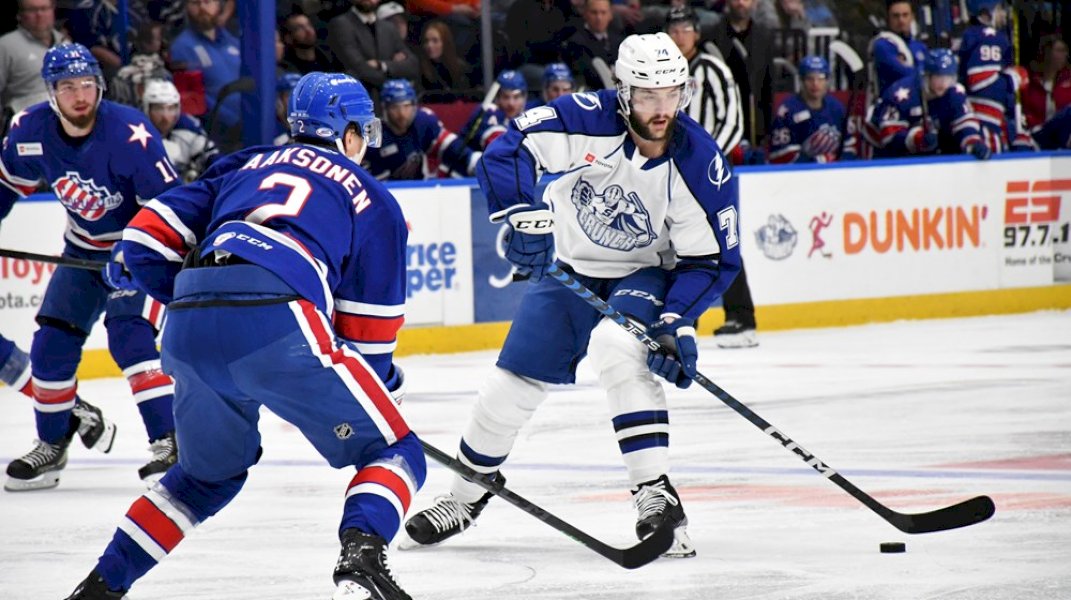 In addition to Robert’s three-goal and four-point game, Daniel Walcott recorded a three-point night with two goals and an assist, while Trevor Carrick rounded out the scoring with a goal and a helper. The Crunch are now 1-1-0-2 on the season and 1-1-0-0 in the 12-game season series against the Amerks.

Crunch goaltender Max Lagace recorded the win stopping 32-of-34 shots. Ukko-Pekka Luukkonen turned aside 28-of-33 between the pipes for the Amerks.

Syracuse converted on 1-of-3 power play opportunities with Rochester going 1-for-4.

The Crunch were first on the board with a power-play goal 6:51 into the game. After some quick tic-tac-toe passing, Robert scored backdoor into a wide-open net from the bottom of the right circle.

The Amerks evened the score halfway through the middle frame when Sean Malone shoved the puck across the goal line during a battle in the crease while on the man-advantage.

Syracuse regained their lead at the 13:19 mark of the second period off Robert’s second goal of the game. Simon Ryfors sent a cross-slot feed for Robert to chip in another backdoor goal.

Walcott scored twice early in the third period to build up a three-goal Crunch lead. At the 4:05 mark, Jack Thompson’s right-point shot redirected off Walcott and past Luukkonen. Four minutes later, Robert centered the puck for Walcott to send in as he came skating down the slot.

Rochester stole one back with 6:50 remaining in the game when Mitch Eliot netted a slap shot from the blue line, but Carrick responded when he powered in a shot from outside the left circle just 23 seconds later.

Robert completed the hat trick and sealed the Crunch victory with an empty-netter in the final minutes of play.

The Crunch are back in action on Wednesday when they travel to face the Toronto Marlies.

Crunchables: Felix Robert is the first player since Nikita Kucherov to score a hat trick in the team’s Home Opener…The Crunch have scored 18 goals in the first four games, the most since 2012-13…Daniel Walcott recorded his first career three-point game tonight…With 315 games, Daniel Walcott is tied for the second most in franchise history with Jeremy Reich.

COMETS TAKEN DOWN IN PROVIDENCE SATURDAY

Raiders Bounce Back Against Warriors