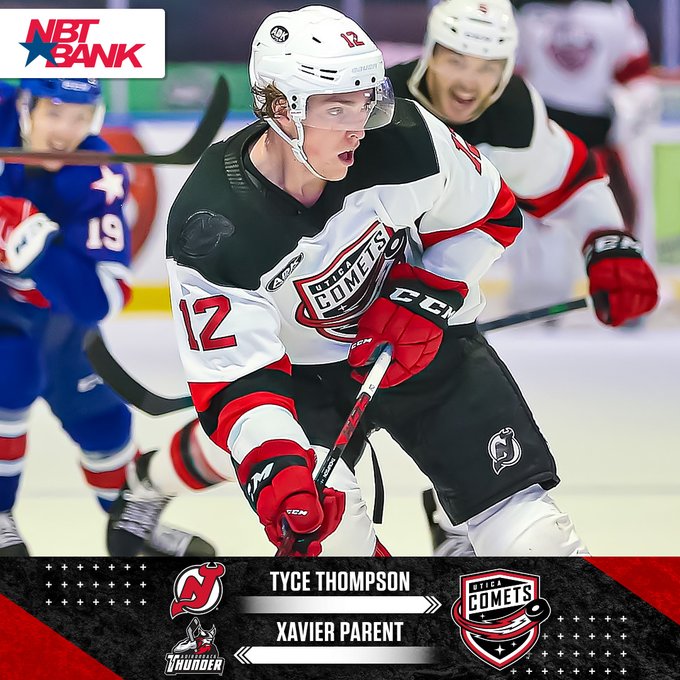 Thompson, 23, is a fourth-round draft pick of the Devils in the 2019 NHL Entry Draft. Last season, he skated in 16 games for the Comets in the regular season scoring six goals and nine assists for 15 points. He also played in five playoff games where he registered one goal and one assist. He suited up in two NHL games with the Devils in the previous year but didn’t register a point. Thompson, 6-foot-1, 180-lbs, skated three seasons at Providence College before turning pro during the culmination of the 2020-21 season.

In additional roster moves, the Comets announced they have loaned Xavier Parent to the Adirondack Thunder of the ECHL.

Opening night will take place on tonight inside the Adirondack Bank Center against the Wilkes Barre Scranton Penguins at 7:00 PM. Tickets are on sale now. Season Ticket Memberships are now available for the 2022-23 Season. All new Season Ticket Members will receive an exclusive Comets 10th anniversary jersey with their ticket package. Season ticket information is available at uticacomets.com/szn. Comets fans can guarantee a ticket to five premier games with the premier pack. This five-game package starts as low as $99 at uticacomets.com/premierpack.