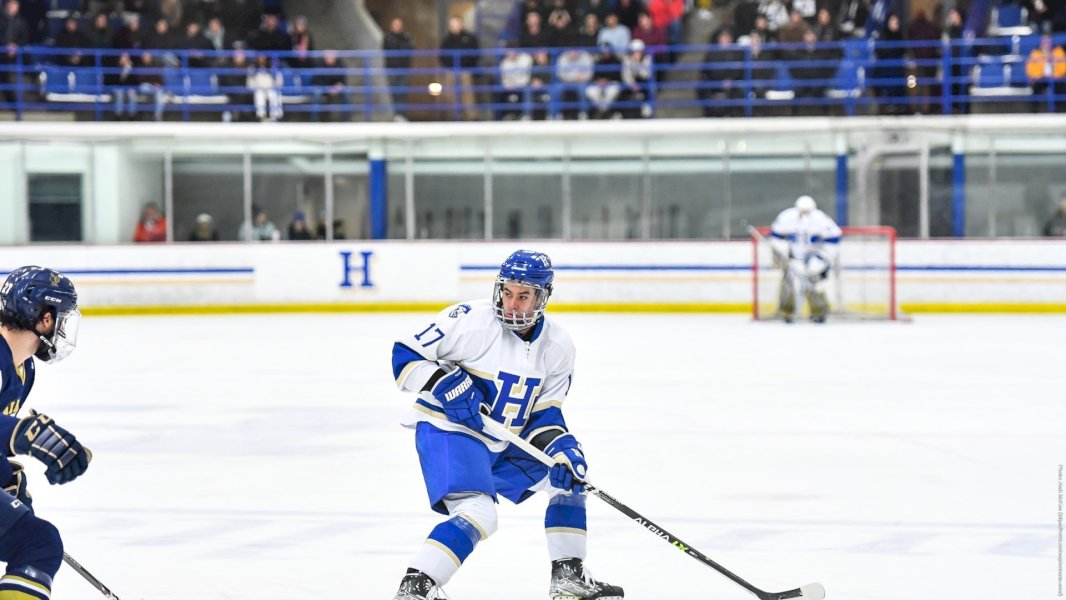 Hamilton netted an early statement goal just 63 ticks into the opening period. The Continentals sent the puck into the Ephs’ defensive zone and Sean Thomson ’23 fired a shot that was saved by Cal Sandquist. Sean McAvoy ’23 won the ensuing faceoff for Hamilton and Jackson Krock ’26 slung the loose puck past Sandquist from the edge of the crease. The Continentals added to their advantage at 4:29 of the second period. Sam MacBean ’23 sent a pass off the boards to Fred Allaire ’23. Allaire skated past a defender and rocketed a shot from the left faceoff circle that found the back of the net for a 2-0 lead. Hamilton built a three-goal cushion on the power play with 7:33 left in the second. Max Bulawka ’26 passed the puck over to Logan Greene ’24 who took a shot from the top of the zone, and Danis chipped in the deflection from outside the left circle. Williams responded just 29 seconds later on a counter-attack goal by David Vieten on passes from Sean Clarke and Connor Kucharski. The Ephs added another goal during a five-minute power play 1:18 into the third period. Williams claimed the faceoff win and Jared Lambright passed it over to Mac Carson who navigated the puck around the net for a wrap-around past Archer. The Continentals answered at 7:28 of the third. Nick Hawkins ’23 sent a pass over to Allaire and he fired the initial shot that was saved. Danis was in the right spot for the follow-up at the left side of the crease. The Ephs pulled Sandquist for an extra skater with 1:41 remaining. Williams managed to put four shots on goal but Archer stopped them all, and another was blocked by Hawkins. Williams held a 32-22 shot advantage went 1-for-7 on the power play. The Ephs were on the power play for the last 24 seconds of the second period and the first five minutes of the third. Hamilton posted a 37-33 edge in faceoffs and was 2-for-5 on the power play.
Notes

Hamilton improved to 5-3-0 and 3-2 in the NESCAC with its fifth win in the last six games. Williams moved to 3-5-0 (2-4 NESCAC). Hamilton is 11-1-4 against Williams in the last 16 matchups.  Krock netted his second goal of the season. Allaire scored his first of the season and the 11th of his career. He won 16 of 25 faceoffs. Danis collected his first two goals of his collegiate career.  McAvoy and Greene dished out their first assists this season while MacBean passed out his second. Bulawka tallied his third assist of the season. Groton won 12 of 20 faceoffs. Archer owns a 1.61 goals against average and .944 save percentage in five starts. Sandquist made 18 saves for the Ephs.
Next Game
Hamilton returns to action after a break for finals with a non-conference matchup against Trine University (6-5-1 overall) on Friday, Dec. 30 at 7 p.m. in Angola, Indiana.

Women’s hockey explodes for six goals in win over No. 15 Endicott