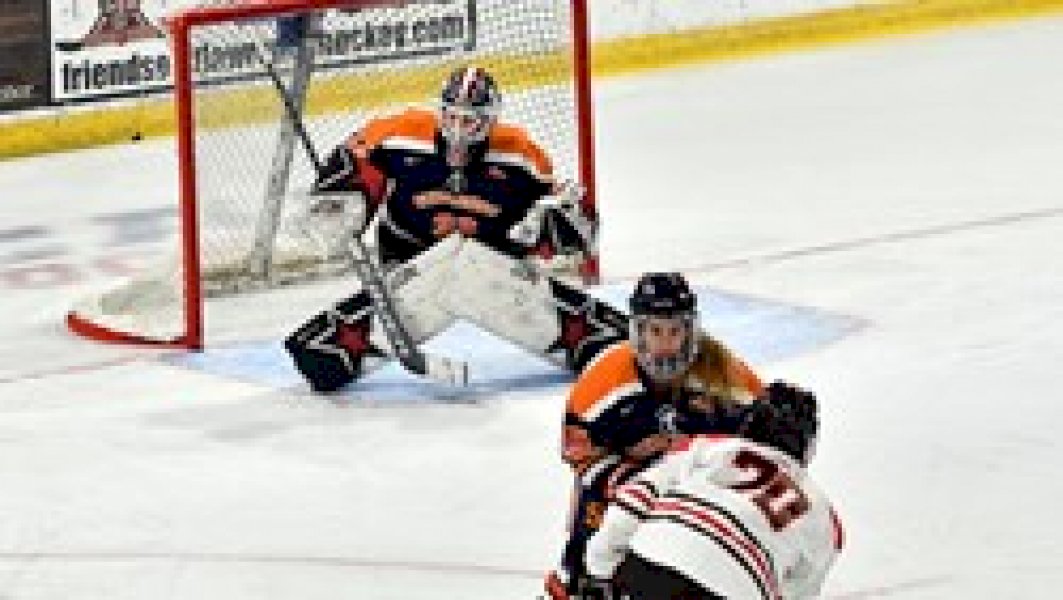 SYRACUSE, N.Y. – The Orange took an early lead in the first period and then tied the game late in the third period in a 2-2 overtime tie in the Appleton Arena at St. Lawrence on Sunday. Senior Lauren Bellefontaine gave the Orange a 1-0 lead less than six minutes into the game and senior Abby Moloughney scored a goal with 3:52 remaining in the third period to tie the game at two and force overtime.

“Getting the lead in the first period was good,” said head coach Paul Flanagan. “And then we did not give up when we fell behind. It was a real boost psychologically to tie the game late in the third period and force overtime. We need to take lessons from this weekend and learn from them heading into our home-opener on Thursday. We will be looking forward to having energy in the building from our fans with the Kickoff Weekend for the Celebration of 50 Years of Syracuse Women’s Athletics.”

Bellefontaine scored in the sixth minute of the game on a power play goal 14 minutes into the opening period, on assists from Moloughney and freshman Sarah Marchand. Moloughney’s goal in the third period was on an assist from Bellefontaine.

St. Lawrence’s Kristina Bahl scored to tie the game, 1-1, less than two minutes into the second period and then the Saints took a 2-1 lead with nine minutes remaining in regulation on a goal by Aly McLeod. Five minutes later Moloughney tallied her second goal of the season to tie the game, 2-2. In the overtime period SLU had six shots and the Orange had four but neither team scored.

Senior Arielle DeSmet recorded 32 saves in the game, including turning away a St. Lawrence two-on-none breakaway with 2:52 remaining in the overtime period.

Senior Abby Moloughney scored her 31st career goal and recorded her 45th assist. She is tied for 10th in Syracuse history with 76 career points.

UP NEXT: HOME OPENER AND KICKOFF WEEKEND FOR CELEBRATION OF 50 YEARS OF SYRACUSE WOMEN’S ATHLETICS

Kickoff Weekend is set for October 7th through 10th, beginning with the ice hockey home opener against Clarkson on Thursday, October 7th at 6 pm  in the Tennity Ice Pavilion. All former student-athletes, fans and friends of Syracuse University Athletics are invited back to campus to begin the celebrate 50 years of women’s athletics during multiple events. Admission to Orange ice hockey home games is free. All fans attending games must adhere to Syracuse University’s COVID-19 policy, which can be found here.

Raiders Pick up Win Over Mercyhurst