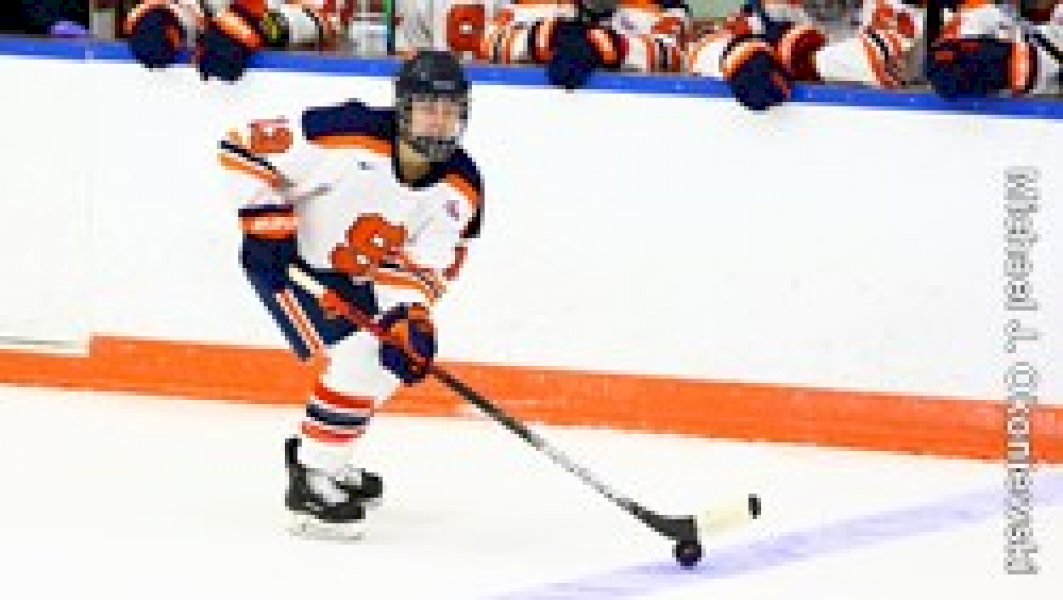 The Orange ice hockey team will open the 2021-22 season at St. Lawrence University in the Appleton Arena in Canton, N.Y. on Friday, October 1st (6 pm). The second game of the season-opening series is set for Saturday, October 2nd (2 pm).  Both games will be streamed on ESPN+. The game is a homecoming for Orange head coach Paul Flanagan who is a native of Canton and a graduate of St. Lawrence. He was the head coach for the SLU women’s program from 1999-2008, leading the Saints to the women’s NCAA Frozen Four Championship five times in his nine-year tenure, which ties for the most appearances in the country. Flanagan’s four-year run (2003-07) of Frozen Four appearances is also tied for best in college hockey. He had a 230-83-24 record with the Saints.

Orange defender Jessica DiGirolamo is the 2021-22 captain for the second year in a row and senior forwards Lauren Bellefontaine and Abby Moloughney are the assistant captains. DiGirolamo and Moloughney, along with goaltender Allison Small, earned 2021-22 All-CHA Preseason Honors. Freshman forward Sarah Marchand is the CHA Preseason Co-Rookie of the Year.

Head coach Paul Flanagan kicks off his 14th season with the Orange. He has coached for Syracuse since the program’s inaugural 2008-09 season and recently led the program to the 2018-19 NCAA tournament. In the 2020-21 season, Flanagan guided the team to a 12-9-1 record and a spot in the CHA Tournament Championship game.

In the exhibition game against RPI, DiGirolamo and sophomore Rayla Clemons each netted a goal in the Orange’s 3-2 loss.

ORANGE IN THE RECORD BOOKS

Goaltender and 2021 All-Tournament Team selection Allison Small ranks sixth on the Orange career saves record list (1,196 in 44 games) and holds the Syracuse career save percentage record with a .925 mark.

Kickoff Weekend is set for October 7th through 10th. All former student-athletes, fans and friends of Syracuse University Athletics are invited back to campus to begin the celebrate 50 years of women’s athletics during multiple events, including the Orange home opener against Clarkson on Thursday, October 7th at 6 pm.

The Orange will play Clarkson in the home opener on Thursday, October 7th at 6 pm in the Tennity Ice Pavilion. Syracuse will travel play the Golden Knight’s at Cheel Arena in Potsdam on Saturday, October 9th (3 pm).