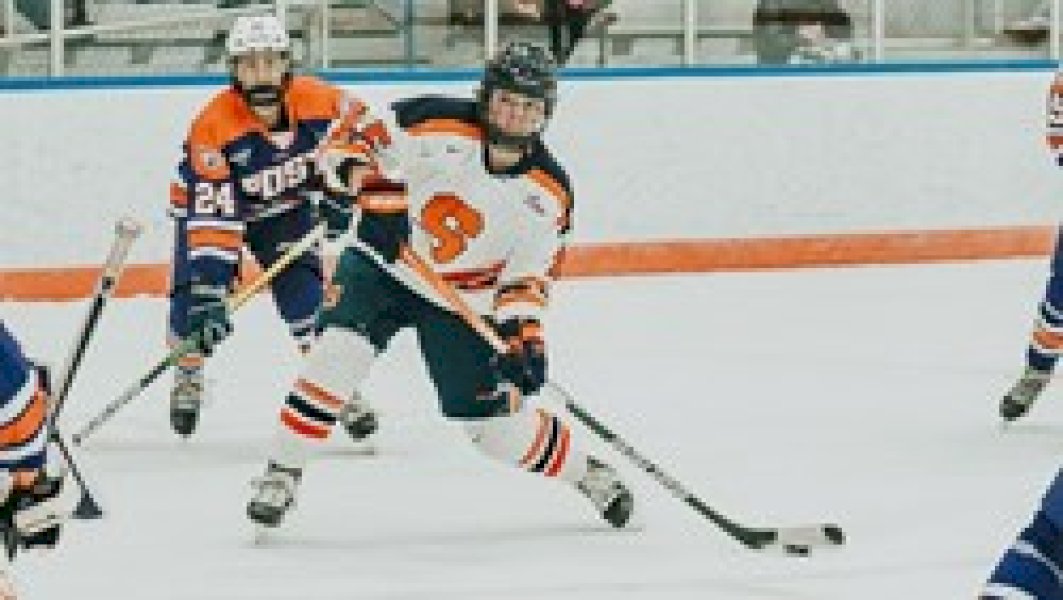 Syracuse has a weekend series at #12 Penn State on December 3rd and 4th as the Orange return to College Hockey America play. Both games start at 1 pm at the Pegula Ice Arena in State College, Pa. and will be streamed on B1G+. The Orange (7-9-1) are in first place in the CHA with a 4-0 record, while the Nittany Lions (11-8-1) are in second with a 3-1 mark.

Syracuse leads the series against Penn State, 30-5-8. Last season three of the four games in the series went to overtime resulting in a Syracuse 2-1 win, a 1-0 Penn State win and a 1-1 tie. The Orange won the fourth meeting, 6-3.

A two-time CHA Forward of the Week in November, Thompson scored four points in four of six games last month. In the CHA, she is tied for third in goals (8), tied for fourth in points (14), tied for first in power play goals (3), tied for second in shorthanded goals (1) and tied for seventh in face off win percentage (.500). D’Arcy has six points in her first season at Syracuse, including one goal and five assists, and 13 blocks.

Sarah Thompson recorded her first career hat trick in the 10-0 win against Post. Thompson leads the Orange in points (14) and is tied with Madison Primeau for goals (8). Graduate Student Lauren Bellefontaine moved into a tie for eighth place on Syracuse’s career scoring record list with a goal and an assist against Post. She is tied with Jessica Sibley and is just two points shy of the seventh spot on the list (Alysha Burris, 94 points).   Five skaters recorded their first career points, including sophomores Erin Brousseau (two goals and two assists) and Terryn Mozes (one goal and one assist), and freshmen Gabby Dougherty (one goal), Charlotte Hallett (one assist) and Heidi Knoll (one assist). Freshman Ariella Merlino made her first start in the net and recorded her first career shutout. Syracuse is tied for third nationally and first the CHA with four shorthanded goals. Sarah Marchand, Sarah Thompson, Tatum White and Rayla Clemons have tallied shorthanded goals this season.  For complete coverage of Syracuse ice hockey, follow us on Facebook (/CuseIce), Twitter (@CuseIce) and Instagram (@CuseIce).