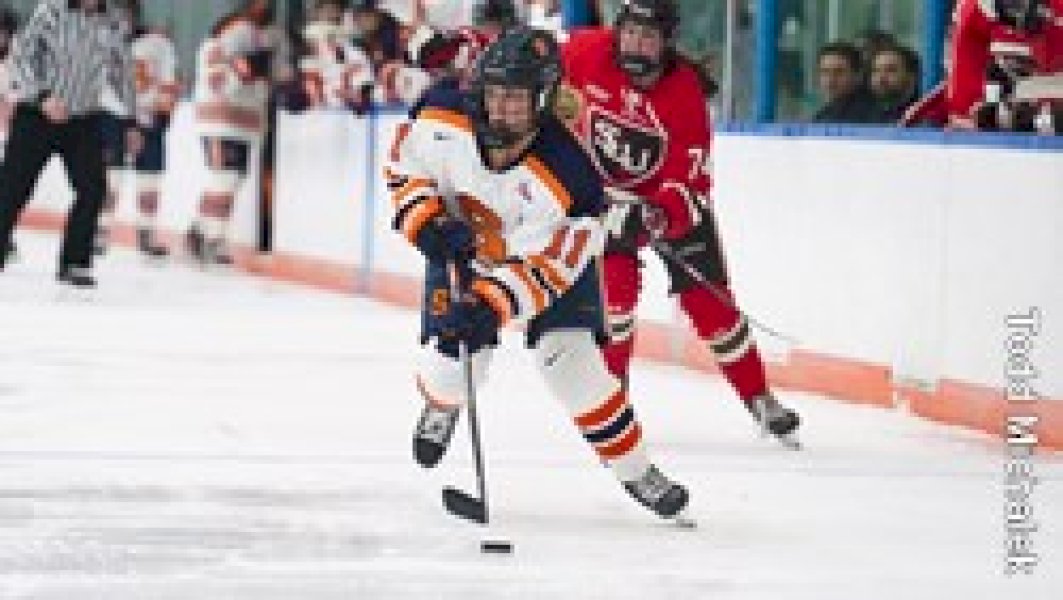 Syracuse will play #11 Clarkson in a home-and-home series beginning Thursday, October 13th at 6 pm at Tennity Ice Pavilion (Cuse.com). The teams will play the second game of the series in Potsdam on Friday, October 14th at Cheel Arena (ESPN+). Orange head coach Britni Smith will face the program she spent the last eight years with as an assistant coach when the Golden Knights come to Tennity Ice Pavilion on Thursday. During her tenure in Potsdam, the Golden Knights won two National Championships and had a record of 207-60-26 record.

DeSmet in the Top 5

Graduate student Arielle DeSmet ranks fifth on Syracuse’s career saves record list. She had 33 saves at St. Lawrence in her most recent outing and totaled 76 saves in the two-game series against the Saints. In the first game against St. Lawrence, DeSmet had 43 total saves, including her 1,500th career save.

Bellefontaine On Doorstep of Top 10

Five Syracuse opponents are ranked in this week’s USCHO Division I Women’s Poll (10/10) that includes the top 15 teams.

Sophomore Sarah Marchand’s goal and assist against St. Lawrence marked her eighth multi-point game in her career. Her career scoring totals include 11 goals and 17 assists (28 points) in 37 games. Junior Rayla Clemons recorded her 10th  career assist on a shorthanded assist to Sarah Thompson at St. Lawrence. Junior forward Tatum White ranks 25th in the nation with 47 faceoff wins. She had a season-high 16 victories in the faceoff circle at Merrimack (10/1). Her career-best is 20 at Robert Morris (2/26/21) during her first season at Syracuse. Orange defensemen are blocking shots. Junior defensemen Hannah Johnson and Kambel Beacom each recorded three blocks in a game at Merrimack. Johnson had three in the win and Beacom had three on Saturday. Beacom had a of blocks in each game against St. Lawrence. Roster Connections