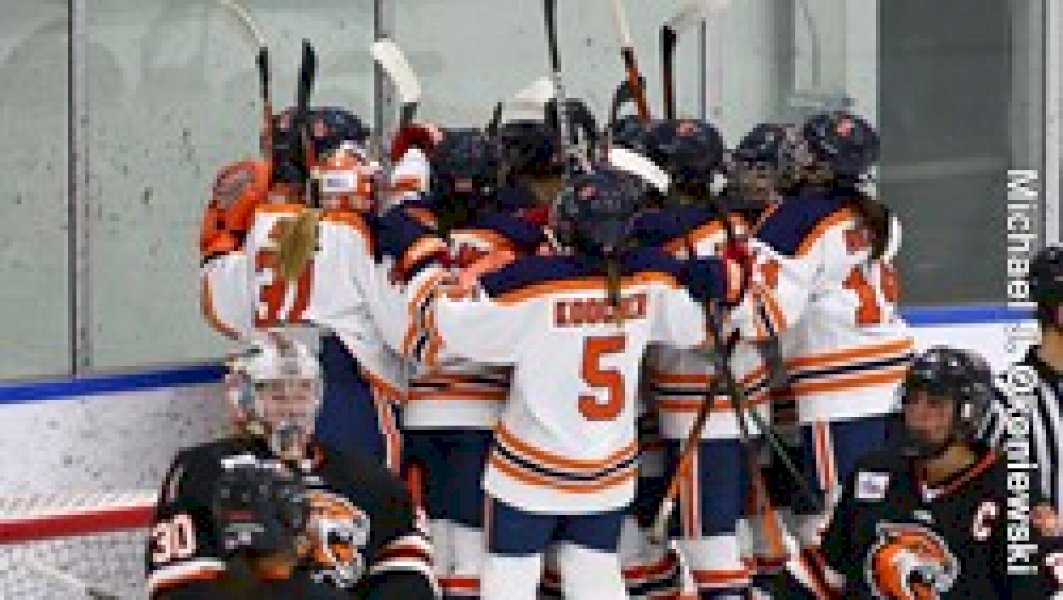 Freshman Sarah Marchand scored the game-winner with just less than three minutes remaining in overtime to give the Orange a 3-2 victory against RIT on Friday night at Tennity Ice Pavilion. Junior Anna Leschyshyn and sophomore Hannah Johnson were on the shift with Marchand and assisted on the goal. Syracuse out-shot RIT 55-11 in the game, marking the most shots on goal for the Orange since they had 63 against Lindenwood on February 15, 2020.

Syracuse will travel to Rochester for the second game in the series at Gene Polisseni Center on Saturday, November 6th at 6 pm. The game will be streamed on Stretch.com.

“Tonight we had a lot of chances because we had our feet moving, we were cycling the puck a lot and we were getting it back to the point,” said head coach Paul Flanagan. “We had a lot of our players just miss tonight, shooting it just wide or fanning on an open net. You would like to think that some of our players who have not scored yet and are getting those chances are going to start cashing in. You can’t dwell on it. You just have to keep working and accentuate the positives. We have to expect more of the same from RIT tomorrow. They are a hardworking team and they manage the puck well.”

In the first period, senior Lauren Bellefontaine gave the Orange a 1-0 lead when she corralled the rebound off of a shot by Abby Moloughney right in front of the RIT goal and put it past goalie Sarah Coe with 1:25 remaining. Moloughney and sophomore Tatum White assisted on the goal.

After RIT tied the game early in the second period, Orange captain Jessica DiGirolamo put Syracuse ahead again when she fired a shot from just inside the blue line into the bottom right corner of the net for the score. Bellefontaine and freshman Sarah Marchand tallied the assists on the goal. RIT responded to tie the game with 46 seconds remaining in the second period. The overtime period was necessary after neither team scored in the third.