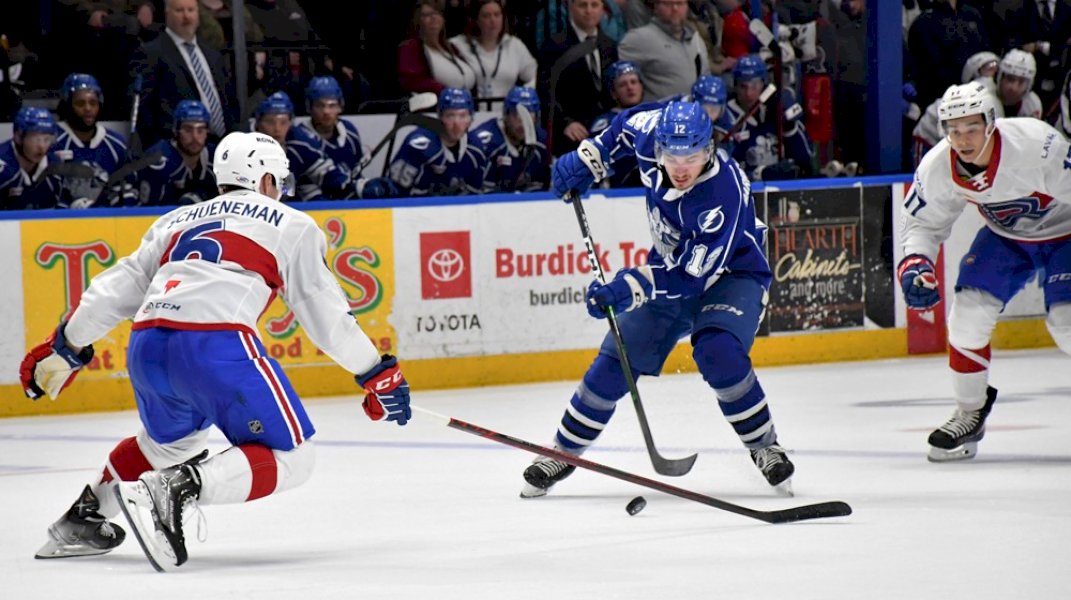 SYRACUSE, N.Y. – The Syracuse Crunch topped the Laval Rocket, 5-3, in Game 1 of the North Division Semifinals tonight at the Upstate Medical University Arena.

The win puts the Crunch out to a 1-0 lead in the best-of-five series against the Rocket.

Max Lagace recorded the win in net turning aside 28-of-31 shots. Kevin Poulin stopped 26-of-30 between the pipes for the Rocket. Syracuse went 2-for-4 on the power play, while Laval converted on 1-of-2 man-advantages.

The Rocket were first on the board with a power-play goal 4:11 into the game. Lagace made the save on Danick Martel’s shot, but Alex Belzile found the rebound and chipped it in. Just over a minute later, the Crunch evened the score when Remi Elie found a loose puck and fired it in with a slap shot from the top of the left circle.

Syracuse took the lead with a power-play goal of their own with 1:17 remaining in the first period. Cole Koepke got a stick on Anthony Richard’s shot from the high slot to tip the puck past Poulin.

The Crunch scored again just 1:08 into the middle frame when Richard sent in a rebound from in front of the net, but Laval stole it back at the 15:19 mark while Joel Teasdale was stationed at the goal post to jam in a second chance opportunity.

The Crunch added another late-period goal when they converted on the man-advantage with 1:49 remaining in the second stanza. Charles Hudon took a shot from the right circle that bounced off Poulin and out for Gemel Smith to bat in on the backdoor.

The Rocket came back within one 6:28 into the third period. Jean-Sebastien Dea carried the puck into the zone down the left wing and sent a last-minute cross-slot feed for Belzile to pot his second of the game.

Syracuse maintained their lead and Richard scored his second of the night into the empty net during the final seconds of play.

Game 2 is tomorrow in Syracuse.