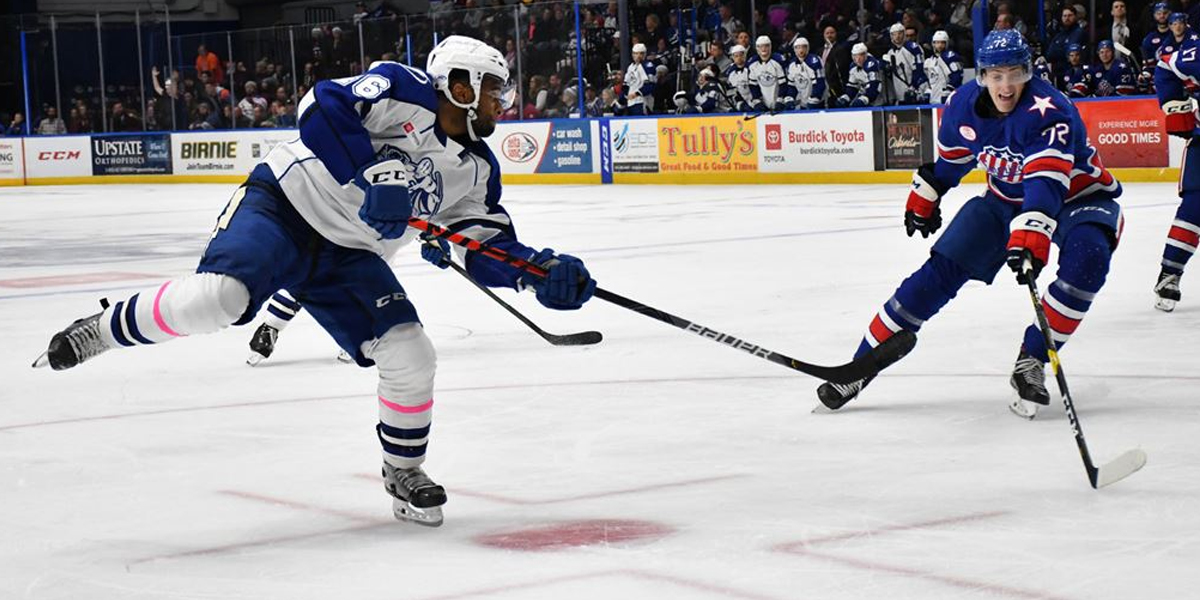 Syracuse came up short in a back and forth affair after the Americans scored an overtime winner at 4:19 of the extra period.

Gemel Smith gave Syracuse an early 1-0 lead thanks to a power-play goal at 6:33 of the opening period. Smith skated into the high slot and released a wrist shot that trickled through the Amerks goalie and into the net. The game was tied up at one after Rochester converted on a 5-on-3 power-play with six minutes to go in the period.

At 4:51 of the second Boris Katchouk picked up a loose puck from behind the net on his backhand and tucked the puck into the half empty net. The Amerks responded with two goals at 11:22 and 11:43 to take a 3-2 lead, but the scoring in the second period wasn’t done yet.

Ben Thomas fired a long range shot from the blue line that found its way through a ton of traffic and into the back of the net. Cory Conacher went bardown 65 seconds later to give Syracuse a 4-3 lead heading into the third period.

The lead didn’t last long as it only took Rochester 10 seconds to tie the game once the third period started. Alex Barre-Boulet extended his scoring streak to five games when he rocketed a slapshot into the net at 6:11 of the period. The power-play goal was assisted by Cameron Gaunce and Chris Mueller gave Syracuse a 5-4 lead. A minute and a half later Smith scored his second of the night to give the Crunch a two-goal cushion heading into the second half of the third.

Rochester battled back and scored at 13:15 to pull within one before scoring the tying goal with only 13 ticks left on the clock. Despite firing 3 shots on goal in overtime it was the visitors who found the back of the net. On their only shot of the extra frame the Americans scored to take this one 7-6. Scott Wedgewood finished with 21 saves on 28 shots (and one assist) for Syracuse.

A night after losing in overtime to Rochester the Crunch found themselves in a similar situation Sunday night. Syracuse out-shot Toronto 35-18 including 11 shots on seven power-play opportunities.

After trailing 1-0 heading into the second period the Crunch exploded for three goals in 11 minutes. Cal Foote got the scoring started at 7:47 of the second. His dump in hit a stanchion in the glass and bounced into the slot. The Toronto goalie was behind the net to stop the dump in and attempted to reach out with his stick to stop the puck, but inadvertently deflected it into the net.

Mitchell Stephens and Ross Colton teamed up to extend the lead to 2-1 at 16:28. Stephens drew two defenders leaving Colton all alone streaking into the zone. Stephens slid the puck over to Colton who wristed a one-timer past the Marlies goaltender. The power-play went to work late in the period and connected to give Syracuse a 3-1 lead. Alexander Volkov sent the puck cross-ice to Gemel Smith who held the puck looking to pick his spot. He instead passed the puck to Taylor Raddysh who waiting backdoor for the tap in goal.

We put up three in the middle stanza to make it a 3-1 lead through 40 minutes. #TORvsSYR

Toronto scored on 2 of their 5 shots in the third period to force overtime. After a save by Louis Domingue Syracuse regrouped in their own zone before breaking out up ice. Gemel Smith stepped into the Marlies zone deked around a defender and sent a backhand shot top shelf to give the Crunch the 4-3 victory.

The Syracuse homestand continues this weekend when the Bridgeport Sound Tigers and Binghamton Devils come to town Friday and Saturday. The Crunch are then off to Hershey for a 5:00pm game Sunday.