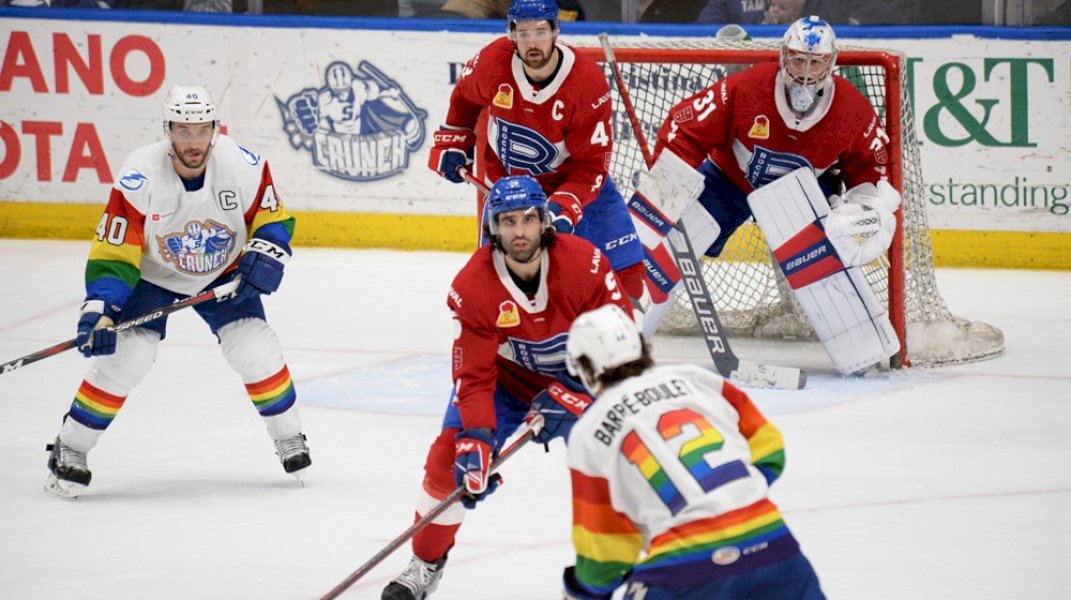 SYRACUSE, N.Y. – After giving up the first goal, the Syracuse Crunch rolled past the Laval Rocket, 5-1, tonight at the Upstate Medical University Arena.

The victory advances the Crunch to a 10-game home winning streak and a 38-25-7-2 record. Syracuse is now 3-3-1-0 in the eight-game season series against Laval.

Max Lagace earned his fifth straight win stopping 19-of-20 shots in net for the Crunch. Cayden Primeau turned aside 34-of-38 between the pipes for the Rocket. Syracuse’s special teams had another productive night going 2-for-6 on the power play and a perfect 3-for-3 on the penalty kill.

The Rocket were first on the board 3:07 into the game when Joel Teasdale drove towards the net and jammed the puck across the goal line.

At the 7:45 mark, Nick Perbix knotted the score when he grabbed the puck all alone out front and chipped it past Primeau.

The Crunch took the lead early in the middle frame with a power-play goal. Charles Hudon started the play with a pass down to Alex Barre-Boulet at the goal line. He quickly centered a feed for Gabriel Dumont to one-time in from between the circles. Syracuse potted another one at 14:59 when Simon Ryfors wrapped around the back of the net and sent the puck out front for Riley Nash to redirect in.

Syracuse’s power play converted for a second time 13:11 into the third period. Anthony Richard skated the puck along the end boards before sending it out for Nash to score his second of the night. Dumont then potted his second of the game into an empty net with 1:41 remaining in the third.

The Crunch complete the weekend’s three-in-three tomorrow when the team travels to Hershey.