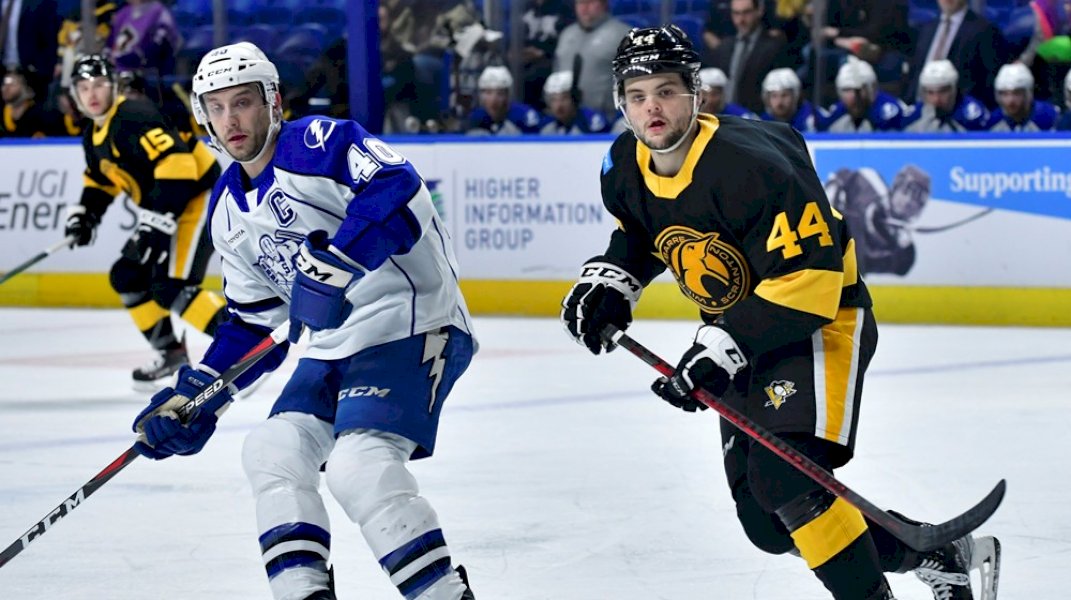 SYRACUSE, N.Y. – The Syracuse Crunch rattled off a three-goal third period, but eventually fell to the Wilkes-Barre/Scranton Penguins, 4-3, in overtime today at Mohegan Sun Arena at Casey Plaza.

Goaltender Hugo Alnefelt stopped 36-of-40 shots in net for the Crunch. Alex D’Orio turned aside 24-of-27 shots between the pipes for the Penguins. Syracuse was unable to convert on their two power play opportunities, while Wilkes-Barre/Scranton went 1-for-2.

The Penguins opened scoring 3:27 into the game. Alnefelt made the save on Cam Lee’s long left-point shot, but Radim Zohorna was in front of the net to chip in the rebound.

Wilkes-Barre/Scranton doubled their lead with another rebound goal 12:29 into the second period. Felix Robert’s shot was kicked aside for Drew O’Connor to jam in from next to the goal post.

The Crunch finally responded and rattled off three goals in the third period to take over the lead. Just 49 seconds into the frame, Gage Goncalves tipped Gabriel Dumont’s shot as he cut across the slot. At 5:04, Gabe Fortier got a stick on Cole Koepke’s shot from the right point. Remi Elie then netted his career-high 11th of the season at the 12:15 mark with a wrister from the top of the left circle to put the Crunch up, 3-2.

With just 1:12 remaining in the game, the Penguins tied it on the power play to force overtime when Valtteri Puustinen scored with a wrister from the left faceoff dot. Wilkes-Barre/Scranton then took the win 3:01 into overtime when Taylor Fedun fired a rebound into an open net.

The Crunch are back in action on Wednesday when they travel to face the Rochester Americans.

Crunchables: Gage Goncalves and Gabriel Fortier both have goals in back-to-back games…Remi Elie hit a new career high in goals with 11…The Crunch are 5-7 when requiring overtime this season.

UTICA CAPS OFF WEEKEND WITH VICTORY