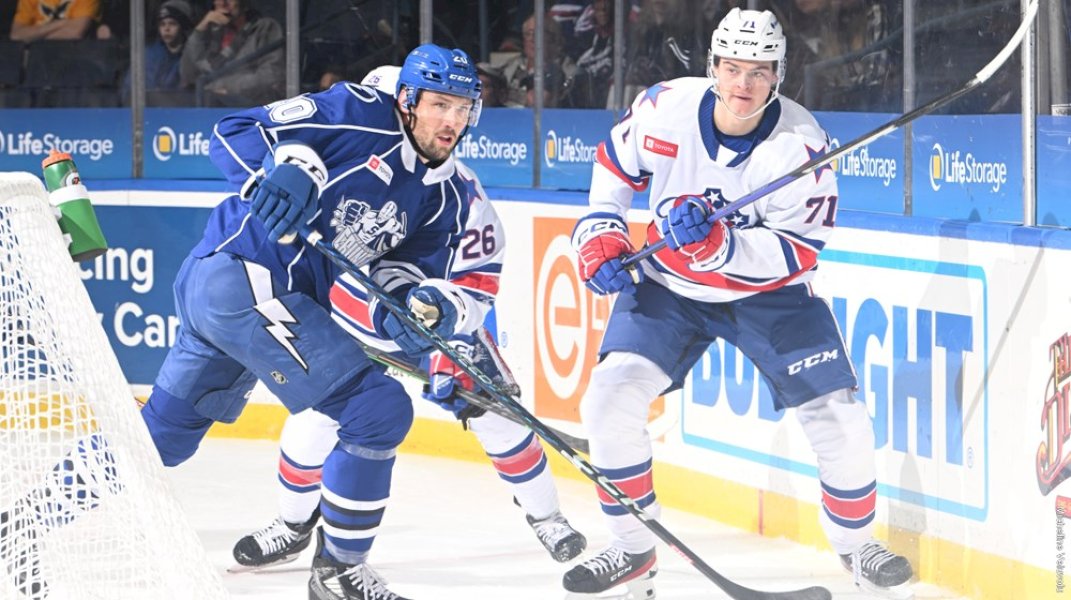 SYRACUSE, N.Y. – The Syracuse Crunch were edged by the Rochester Americans, 4-3, tonight at Blue Cross Arena.

Darren Raddysh and Gemel Smith both put up a goal and an assist for the Crunch, while Alex Barre-Boulet recorded his third consecutive multi-point game with two helpers. The loss moves the Crunch to 0-1-0-2 on the season.

Crunch goaltender Max Lagace stopped 28-of-32 shots. Ukko-Pekka Luukkonen earned the win turning aside 17-of-20 shots between the pipes for the Amerks.

Syracuse was able to convert on 1of-3 power play opportunities with the penalty kill stopping 3-of-4 Rochester man-advantages.

The Amerks were first on the board 13:38 into the game. After a shot went wide right of the net, it ricocheted off the end boards and back out for Tyson Kozak to chip in. The Crunch evened the score with a power play late in the first period. Raddysh started the play when he passed the puck down to Barre-Boulet in the right circle. Barre-Boulet immediately sent a feed back up for Raddysh to one-time from the point.

Syracuse took the lead at the 8:40 mark of the second period. P.C. Labrie sent a lead pass up to Daniel Walcott who skated the puck into the zone down the right wing before throwing a last-minute feed for Smith to finish into a wide-open net.

Linus Weissbach scored two goals just three minutes apart to put Rochester back on top early in the third period. At 5:28, Filip Cederqvist skated the puck behind the net and sent a feed out for Weissbach to go top shelf from a sharp angle while on the man-advantage. A few minutes later, Brandon Biro’s point shot got caught in traffic, but Weissbach found the puck and backhanded it into the net from the slot.

The Crunch knotted the score, 3-3, at 12:37 when Raddysh fed Gabe Fortier in the slot for a quick redirection past Luukkonen, but the Amerks eventually won when the puck slipped past Lagace with three seconds remaining in the game.

The Crunch will host the Amerks in Syracuse tomorrow for the 2022-23 Home Opener.

Crunchables: Lucas Edmonds made his pro debut tonight…With an assist tonight, Alex Barre-Boulet is now tied with Cory Conacher for the most points by a Crunch player during the Tampa Bay Lightning affiliation with 205.
Visit Source