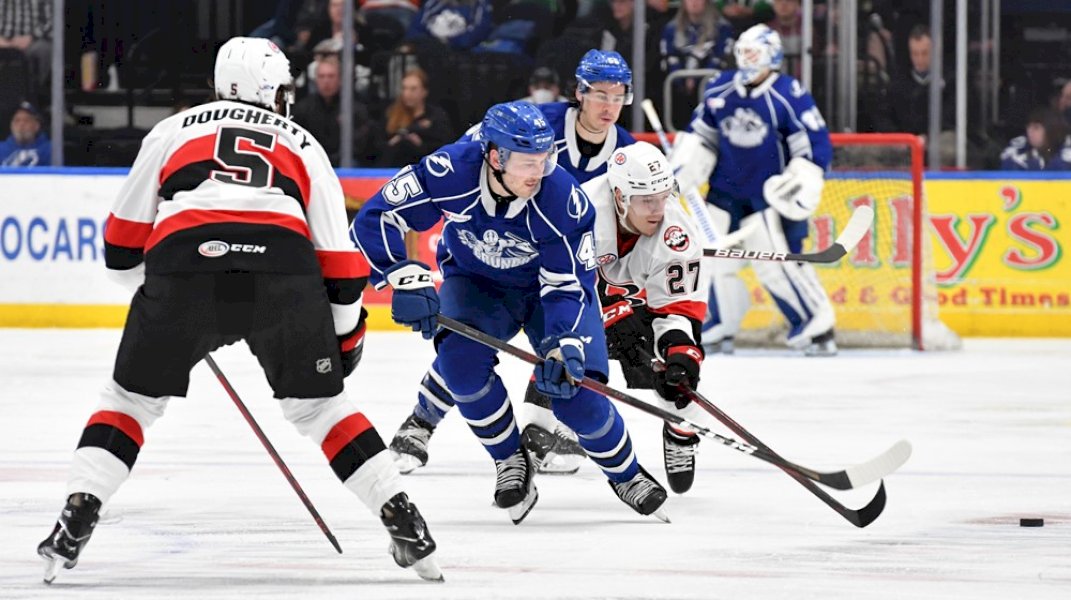 Crunch goaltender Max Lagace earned his fourth consecutive win stopping 26-of-30 shots. Mads Sogaard turned aside 37-of-42 between the pipes for the Senators. Both teams were unable to convert on their two power play opportunities.

The Crunch opened scoring 4:54 into the game when Gabe Fortier skated the puck through the neutral zone and fired a long point shot past Sogaard. Four minutes later, the Senators evened the score off a shot from Parker Kelly in the high slot. With just five seconds remaining in the opening frame, Belleville took the lead. Clark Bishop sent the puck up to the right point for Maxence Guenette to score with a one-timer.

The Senators made it 3-1 during 4-on-4 play at the 9:19 mark of the second period. Guenette skated the puck down the right-wing boards before centering it for Bishop to chip in.

At 13:53, the Crunch stole one back when Alex Barre-Boulet cleaned up the rebound from Sean Day’s right-point shot.

Syracuse evened the score four minutes into the third period when Simon Ryfors fired a wrister from the top of the right circle, but Belleville quickly regained their lead just a minute later as Bishop potted his second of the night after he got around the Crunch defense and pulled Lagace out of position.

The Crunch knotted the game for a second time to eventually force overtime at 16:26. Fredrik Claesson’s shot went wide and ricocheted off the end boards for Cole Koepke to send into an open net.

Four minutes into the overtime frame, Alex Barre-Boulet fired a shot that was stopped by Sogaard, bounced off a Belleville defender and into the back of the net for the victory.

The Crunch are back in action on Wednesday when they host the Cleveland Monsters.

Crunchables: Simon Ryfors has goals in back-to-back games and seven points (2g, 5a) in his last four games…Otto Somppi has back-to-back multi-point games.