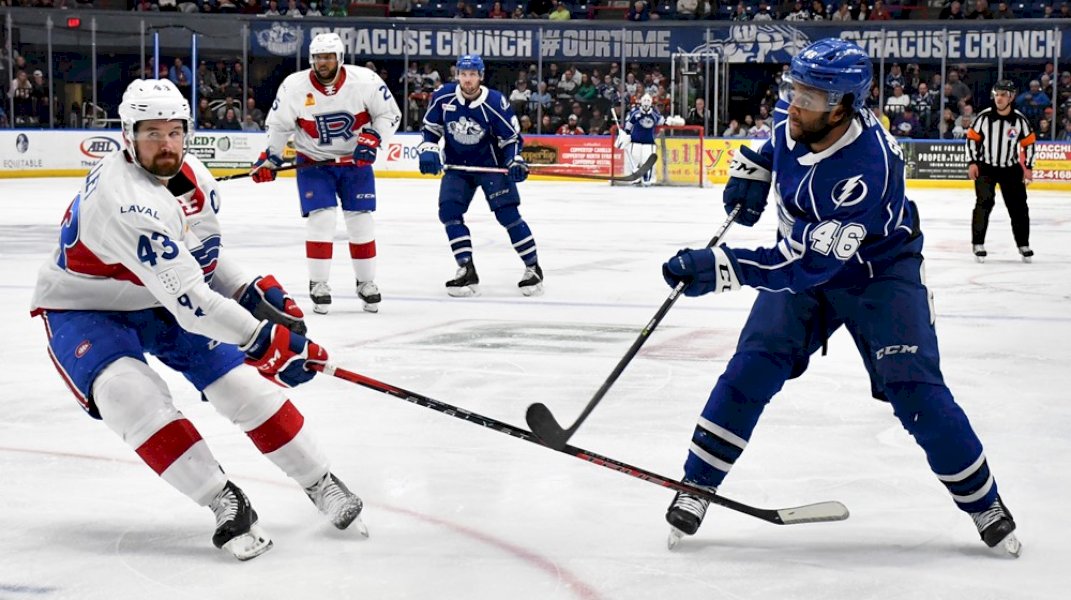 SYRACUSE, N.Y. – The Syracuse Crunch were downed by the Laval Rocket, 3-2, in Game 2 tonight at the Upstate Medical University Arena.

Goaltender Max Lagace stopped 25-of-28 shots in net for the Crunch. Cayden Primeau turned aside 37-of-39 between the pipes for the Rocket. Syracuse was unable to convert on five power play opportunities, while Laval went 1-for-4.

The Crunch opened scoring 5:37 into the game when Simon Ryfors got a stick on Ryan Jones’s slapshot from the point and redirected the puck past Primeau. With 2:27 remaining in the first period, the Rocket evened the score on the power play. Jesse Ylonen took a shot from the top of the left circle while the netminder was screened.

The Rocket took the lead 6:27 into the middle frame. Alex Belzile was down low to grab the puck and shovel a backhander into the net.

Syracuse rallied and tied the game at the 12:40 mark of the third period. Gabe Fortier skated into the zone and sent a shot on net. Primeau made the save, but Daniel Walcott followed behind the play and swept in the rebound.

Laval then netted the game-winner at 18:13. Brandon Gignac backhanded a close-range shot that was stopped, but he grabbed his own rebound and sent it in.

The teams travel to Laval for Game 3 on Thursday.