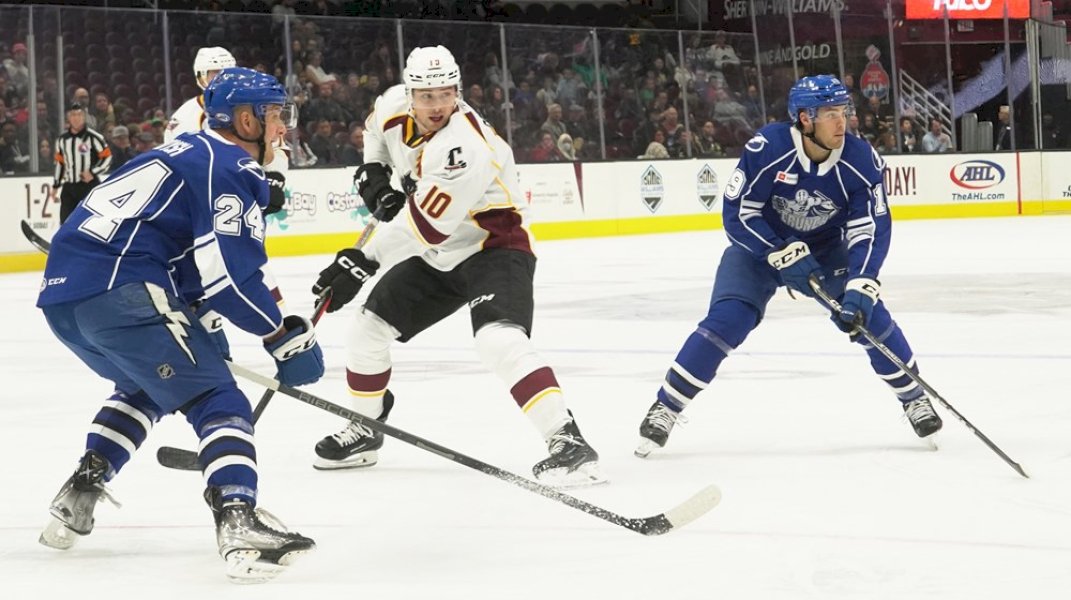 SYRACUSE, N.Y. – Jack Finley scored his first professional goal with just 12 seconds remaining in the game to send the Syracuse Crunch and Cleveland Monsters into overtime, but the Monsters ultimately came out victorious, 5-4, in a shootout today at Rocket Mortgage FieldHouse.

Four Crunch skaters recorded a multipoint game with Felix Robert tallying a goal and two assists, Finley and Darren Raddysh a goal and an assist and Alex Barre-Boulet three assists. Despite the loss, the Crunch earned a point and sit at 0-0-0-2 on the season.

Crunch goaltender Hugo Alnefelt stopped 30-of-34 shots and went 1-for-2 in the shootout. Jet Greaves earned the win in net for the Monsters turning aside 32-of-36 shots and stopping all three Crunch skaters in the shootout.

The Syracuse power play continued to have success converting on 1-of-3 opportunities, while the penalty kill shut down both of Cleveland’s man-advantages.

Simon Ryfors opened scoring 8:11 into the game. Robert skated the puck down the left wing and sent a last-minute feed towards the crease for Ryfors to tip in.

The Monsters were quick to respond when Kirill Marchenko sent in a wrister from between the circles just 49 seconds later.

Cleveland then took the lead halfway through the middle frame. Dillon Simpson centered the puck from along the goal line for Emil Bemstrom to score as he came down the slot.

The Crunch regained their lead with two more goals in the second period. At the 11:51 mark, Gemel Smith sauced a cross-zone feed over to Barre-Boulet in the right circle. He immediately sent it towards the net for Robert to redirect in while on the power play. Barre-Boulet then carried the puck down to the right circle before passing back for Raddysh to light the lamp with a one-timer at 18:03.

The Monsters scored two goals of their own to go back on top in the third period. Brendan Gaunce won the faceoff in the left circle and sent the puck back for Marchenko to grab and score his second of the game at the 8:37 mark. Two minutes later, Bemstrom recorded his second of the game when he redirected a feed from Trey Fix-Wolansky.

With just 12 seconds remaining, Finley chipped in a rebound for his first professional goal to send the game into overtime.

After a scoreless overtime period, the teams went to a shootout for the second consecutive game. Bemstrom was the lone goal scorer in the first round with Greaves stopping all three Crunch skaters to get the win.

The Crunch are back in action when they travel to face the Rochester Americans on Friday.