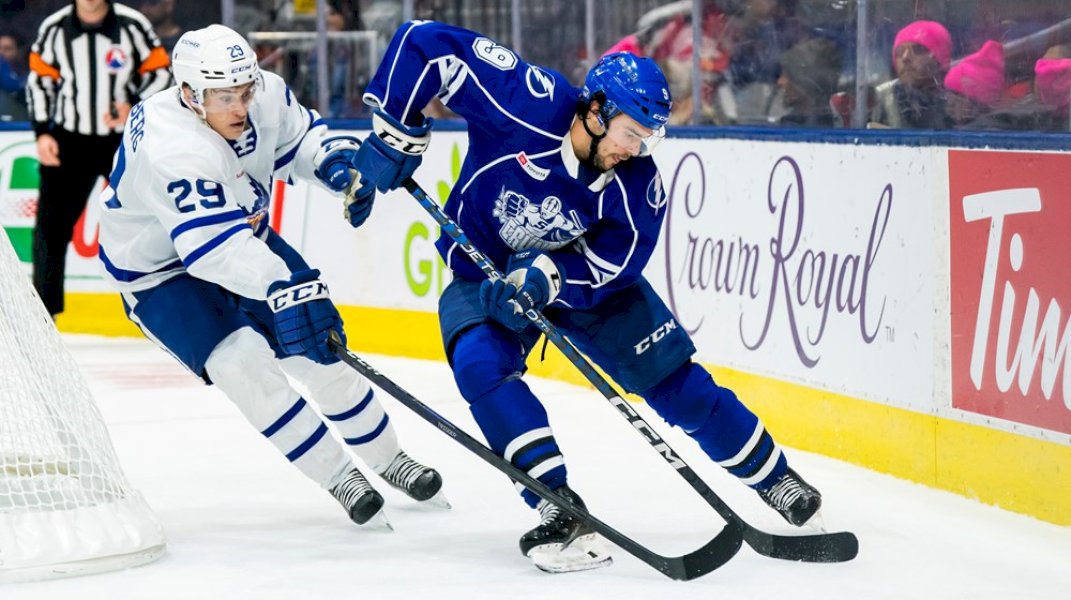 SYRACUSE, N.Y. – The Syracuse Crunch were downed by the Toronto Marlies, 5-3, tonight at Coca-Cola Coliseum.

Simon Ryfors, Gemel Smith and Felix Robert scored the Crunch goals, but a five-goal third period gave the Marlies the win. The Crunch are now 1-2-0-2 on the season.

Crunch goaltender Max Lagace stopped 31-of-35 shots. Keith Petruzzelli turned aside 20-of-23 between the pipes for the Marlies.

Syracuse went 1-for-4 on the power play while Toronto was successful on 2-of-5 man-advantages.

After a scoreless first period, the Crunch broke the stalemate with a power-play goal late in the middle frame. Smith’s shot from the left circle ricocheted off a skate and directly to Ryfors who had a wide-open net to chip the puck in backdoor.

The Marlies scored two goals just 1:02 apart early in the third period to steal the lead. At the 1:08 mark, Toronto converted on the power-play when Adam Gaudette faked a slap shot then skated in and netted a shot from the top of the right circle. A minute later, Danny DeKeyser scored with a wrister from the high slot.

Syracuse quickly responded and evened the score at the 2:39 mark. Ryfors carried the puck into the zone on an odd-man rush and sent a cross-slot feed for Smith to one-time past Petruzzelli.

The Marlies regained the lead with another power-play goal at the 7:54 mark. Lagace made the initial save, but Semyon Der-Arguchintsev got his stick on the puck during a scramble in front of the net and sent it across the goal line. Two minutes later, Joey Anderson scored on a shorthanded breakaway to build a 4-2 lead.

The Crunch came back within one with 3:08 remaining in the game when Robert jammed a loose puck in, but Anderson hit the empty net to lock in a Marlies victory.

The Crunch return home to Syracuse to host the Marlies on Friday.