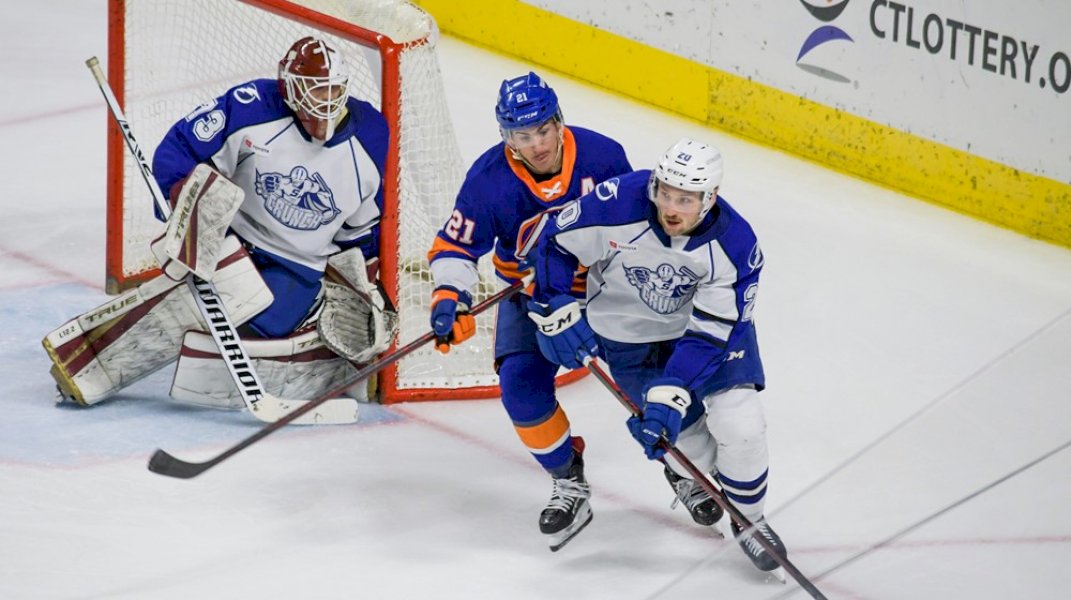 SYRACUSE, N.Y. – The Syracuse Crunch were downed by the Bridgeport Islanders, 7-4, tonight at Total Mortgage Arena.

The loss snaps a six-game points streak and moves the Crunch to 27-22-6-2 on the season. The Islanders took the two-game season series, 2-0.

Crunch goaltender Corbin Kaczperski turned aside 21-of-27 shots. Jakub Skarek earned the win in net for the Islanders stopping 42-of-46. Syracuse went 2-for-5 on the power play, while Bridgeport was 1-for-4.

The Islanders opened scoring just 56 seconds into the game when Andy Andreoff redirected Paul LaDue’s shot from the blueline. They doubled their lead 3:06 into the second period. Austin Czarnik skated the puck down the right wing during a 2-on-1 rush before sending a cross-slot feed for Richard Panik to chip in.

The Crunch responded at the 8:05 mark of the middle frame and put up two quick goals to tie the game. Simon Ryfors started it off when he skated the puck through the neutral zone, across the blue line and stick handled through the zone before shoveling a backhander past Skarek. Just 25 seconds later, Anthony Richard cleaned up the rebound from Fredrik Claesson’s left-point shot.

The Islanders regained their lead at 11:05 when Erik Brown tipped Samuel Bolduc’s shot past Kaczperski, but the Crunch evened the score for a second time off a power-play goal with 1:06 remaining in the frame. Skarek made the save on Alex Barre-Boulet’s shot, but Otto Somppi was down low to chip in the second chance.

Bridgeport scored three goals in the third to go back on top. Just 1:08 into the period, Grant Hutton lit the lamp with a long right-point shot. At 6:25, Czarnik dug the puck out from along the end boards for Panik to pot his second of the night. Arnaud Durandeau then scored on the man-advantage at 12:03 when he wrapped around the back of the net and stuffed the puck in.

Gage Goncalves stole one back for the Crunch when he sent in a rebound while on the power play at the 13:42 mark, but the Islanders stifled a comeback effort when Simon Holmstrom hit the empty net in the final minutes to take the win.

The Crunch return home to host the Belleville Senators tomorrow.

Crunchables: Simon Ryfors has five points in his last three games (1g, 4a)…Otto Somppi has nine points (2g, 7a) in his last seven games…Gage Goncalves has goals in back-to-back games.