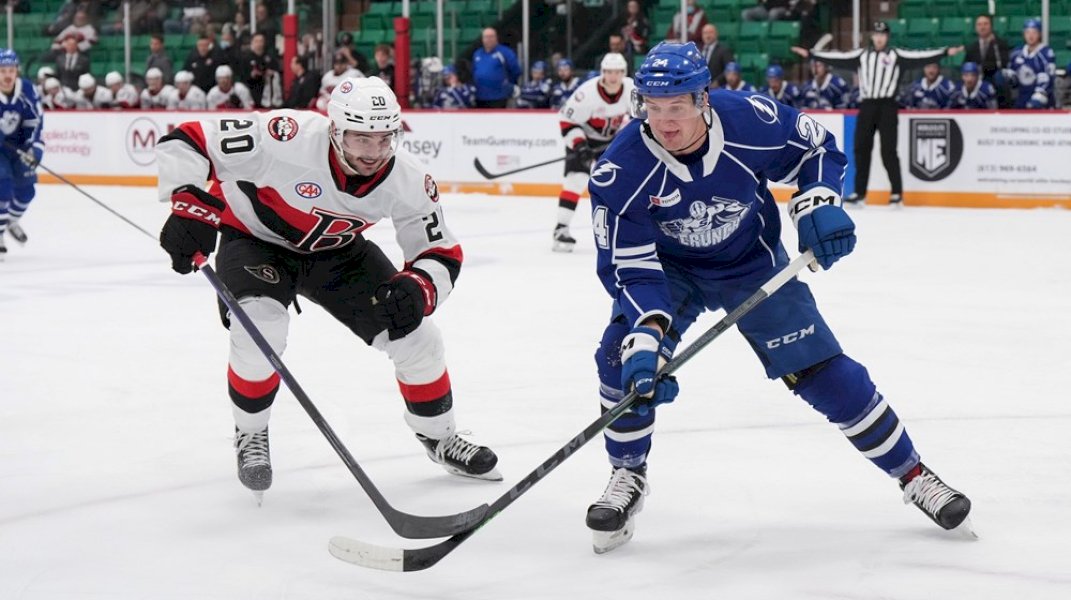 SYRACUSE, N.Y. – The Syracuse Crunch were defeated by the Belleville Senators, 6-4, tonight at CAA Arena.

The loss puts the Crunch on a three-game skid and moves the team to 7-8-2-2 on the season. Syracuse is now 2-1-0-0 in the six-game season series against Belleville.

Crunch goaltender Hugo Alnefelt stopped 26-of-31 shots, while Antoine Bibeau turned aside 35-of-39 between the pipes for the Senators.

Syracuse converted on one of their three power play opportunities and went 1-for-2 on the penalty kill.

The Crunch opened scoring just 4:57 into the game when Gemel Smith came down the slot and fired a wrister that went off the post and in. At 11:53, Jack Thompson doubled the lead with a long shot from the right point.

Belleville stole one back on the power play late in the first period. Alnefelt made the initial save on Maxence Guenette’s shot from the blue line, but Rourke Chartier was down low to chip in the rebound.

The Senators tied the game, 2-2, at the 6:48 mark of the middle frame. After Alnefelt misplayed the puck behind the net, Jarid Lukosevicius threw it towards the crease where it rebounded off a Crunch player and in. Halfway through the period, Lukosevicius put Belleville on top with his second goal of the game. Matthew Boucher centered the puck from beyond the goal line for Lukosevicius to chip in.

Syracuse knotted the score with a power-play goal 5:46 into the third period. Trevor Carrick grabbed a rebound and threw it back towards the crease for Jack Finley to poke past Bibeau. Just 29 seconds later, Belleville regained their lead off a left-circle shot from Cole Reinhardt. Lukosevicius completed the hat trick at 8:14 to put the Senators up by two when he fired in a loose puck in the slot. The Crunch continued to battle and came back within one at the 10:26 mark when Smith sent a cross-zone pass for Gabriel Dumont to score with a one-timer from the left circle.

Belleville halted a comeback effort and Scott Sabourin potted the empty-netter in the final minutes to secure a Senators win.

The Crunch travel to face the Toronto Marlies tomorrow night.

No. 15 Lakers Take Down Bengals By a Score of 9-2 – Oswego State Athletics