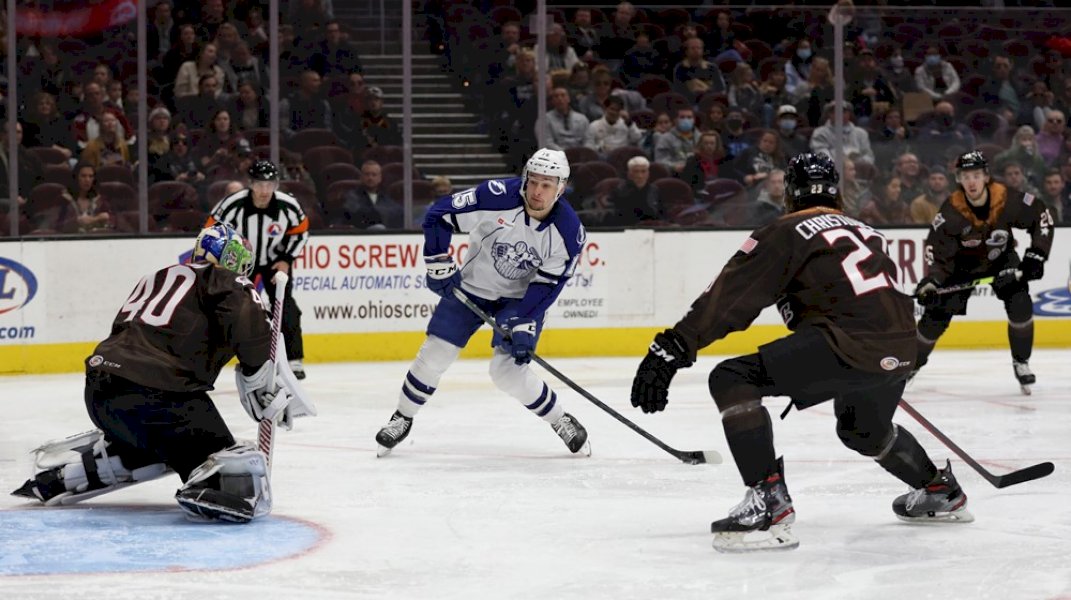 SYRACUSE, N.Y. – The Syracuse Crunch were defeated by the Cleveland Monsters, 5-1, tonight at the Rocket Mortgage FieldHouse.

The loss extends the winless streak to five games and moves the team to 5-6-2-1 on the season and 2-1-2-0 in the eight-game season series against the Monsters.

Max Lagace stopped 27-of-32 shots in net for the Crunch. Daniil Tarasov recorded the win turning aside 23-of-24 shots between the pipes for the Monsters. The Syracuse power play went 0-for-3, but the penalty kill was a perfect 4-for-4.

Cleveland was first on the board 4:27 into the game. Adam Helewka skated the puck into the zone down the left side on an odd-man rush before sending a feed over for Brendan Gaunce to score from the right circle. They doubled their lead 1:19 into the second period when Trey Fix-Wolansky sent home a wrister from the right faceoff dot.

The Crunch finally responded and stole one back halfway through the middle frame. Remi Elie dug the puck out from along the end boards and centered it for Gabe Fortier to chip in.

Cleveland regained their two-goal lead with 4:09 remaining in the second. Cole Cassels sped down the left side and beat Lagace during a 2-on-1.

The Monsters continued to build their lead on another odd-man rush at the 11:05 mark of the third period when Justin Scott carried the puck down the right side before firing it in. At 14:50, Gaunce wrapped around the back of the cage and jammed in his second of the night to lock in a win.

The Crunch return home to host the Belleville Senators on Wednesday.

Crunchables: The Crunch’s 12-game points streak against the Monsters (8-0-3-1) dating back to the 2018-19 season came to an end tonight…Max Lagace returned from injury to start his first game since the season opener against Cleveland on Oct. 15.