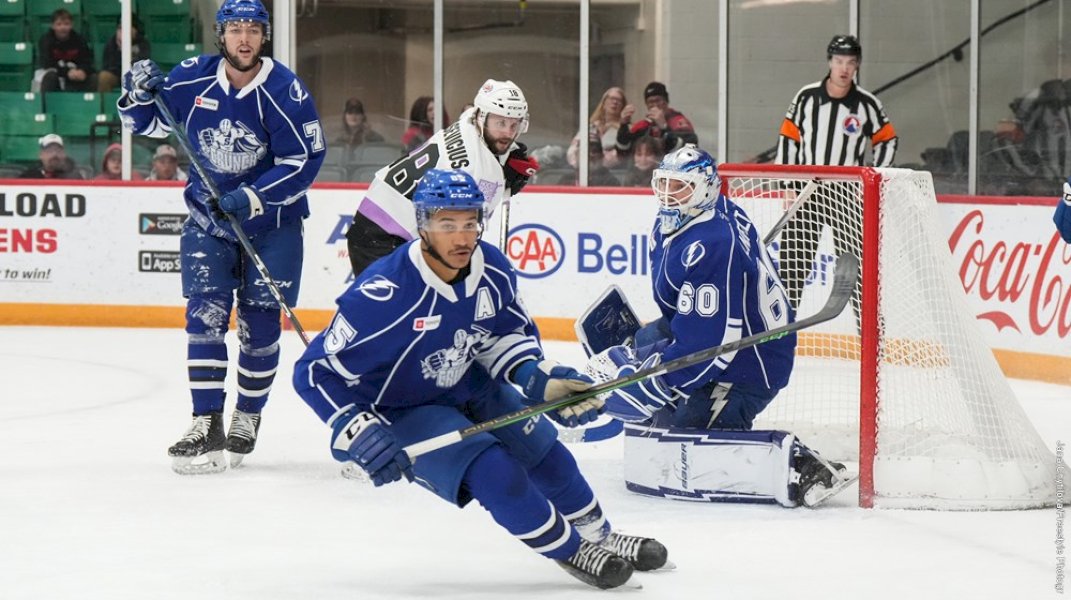 Tonight’s victory also marks the 300th win for Head Coach Ben Groulx. The Crunch are now on a four-game winning streak and move to 6-6-1-2 and 2-0-0-0 in the six-game season series against Belleville.

Crunch goaltender Hugo Alnefelt earned the win stopping 23-of-27 shots. Logan Flodell allowed four goals on 10 shots before being relieved by Antoine Bibeau halfway through the first period. Bibeau went on to turn aside 18-of-19, including a penalty shot attempt from Trevor Carrick.

Syracuse went 1-for-6 on the man-advantage, while Belleville was 2-for-7.

The Crunch opened scoring with four consecutive goals in the first 10 minutes of the game. Ilya Usau potted his first AHL goal at 4:52 to kick off scoring. Flodell made the save on Alex Barre-Boulet’s one-timer, but Usau was in front of the net to send in the rebound. Just over a minute later, Daniel Walcott skated the puck down the right wing, deked around a defender and centered a pass for Jack Finley to backhand in. At 7:42, Carrick extended the lead with a slap shot from the point while on the power play before Shawn Element cut across the slot to redirect a pass from Darren Raddysh at 9:03.

The Senators finally responded at the 17:34 mark of the first period when Cole Reinhardt converted on the power play. Rourke Chartier then scored another power-play goal just 29 seconds into the middle frame to pull Belleville back within two.

Syracuse regained their three-goal lead at 6:19 when Walcott grabbed the puck along the end boards and wrapped around the net to stuff it in, but Belleville capitalized on a turnover at 13:10 and Brennan Saulnier made it 5-3 with a slap shot from the bottom of the left circle. The Senators came back within one with 41 seconds remaining in the second period off another power-play goal. Belleville won the faceoff in the left circle and set up Egor Sokolov for a wrister.

Syracuse held onto their one-goal lead through the final period to earn the win over Belleville. The Crunch return home to host the Toronto Marlies on Wednesday.

Crunchables: The first period tonight was the Crunch’s fourth four-goal period this season.

COMETS FALL IN BATTLE WITH ROCHESTER