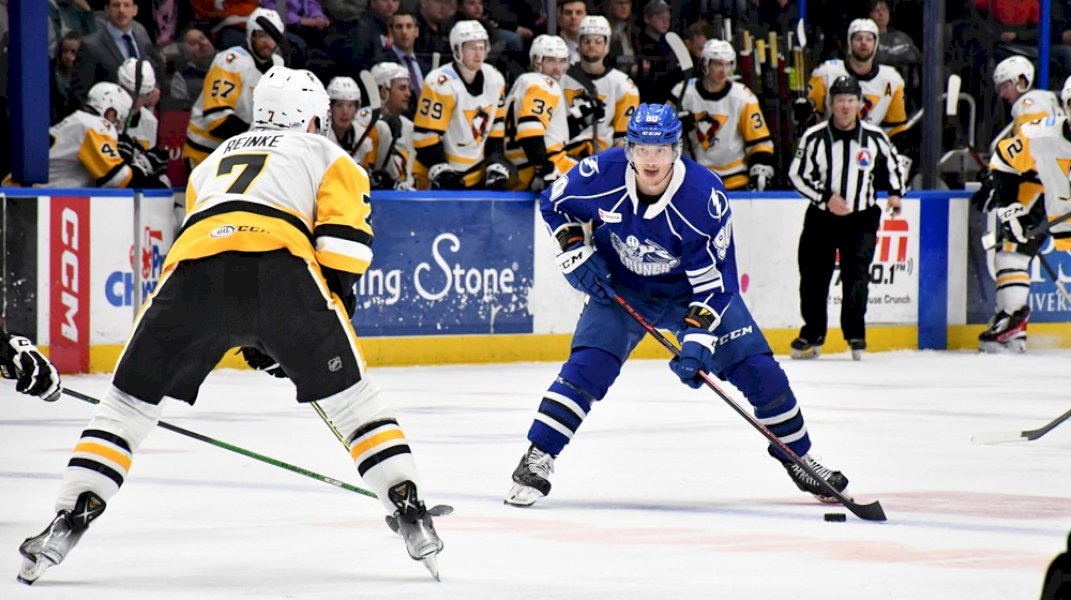 The win also sets a new franchise record with a 12-game home winning streak as the team advances to 41-25-7-2 on the season. Syracuse took the four-game season series against Wilkes-Barre/Scranton, 3-0-1-0.

Goaltender Max Lagace earned his eighth consecutive win stopping 20-of-21 shots in net for the Crunch. Tommy Nappier turned aside 33-of-36 between the pipes for the Crunch. Syracuse special teams went 1-for-3 on the power play and a perfect 4-for-4 on the penalty kill.

The Crunch opened scoring 12:48 into the game when Remi Elie sped down the right wing and roofed a shot past Nappier.

Radim Zohorna then evened the score for the Penguins 4:42 into the second period as he cut across the slot and fired a wrister from the left circle.

Syracuse went back on top with two goals of their own in the middle frame. At 7:57, Elie carried the puck down the left side before sending a feed for Simon Ryfors to finish off during a 2-on-1 rush. Nine minutes later, the Crunch made it 3-1 on the power play. Charles Hudon passed down to Alex Barre-Boulet along the goal line. He quickly redirected a feed back out for Gabriel Dumont to one-time from the right circle.

The Crunch maintained their lead through the third period and Alex Green topped it off with an empty-netter in the final minute of play.

The Crunch host the Laval Rocket for the regular season finale tomorrow.