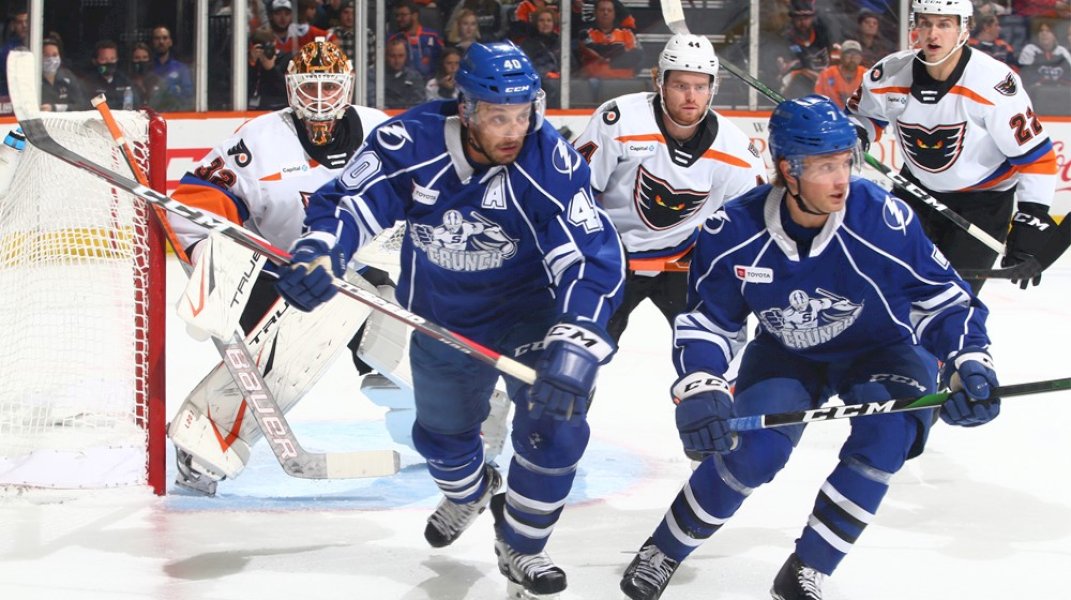 SYRACUSE, N.Y. – Gage Goncalves scored the lone goal in the shootout to give the Syracuse Crunch a 3-2 victory over the Cleveland Monsters tonight at the Upstate Medical University Arena.

The victory advances the Crunch to 3-2-1-0 on the season and 2-0-1-0 in the eight-game season series against the Monsters.

Crunch goaltender Hugo Alnefelt turned aside 26-of-28 shots and stopped all three skaters in the shootout to earn his second win this season. Monsters netminder Daniil Tarasov stopped 36-of-38 and 2-of-3 skaters in the shootout. Syracuse was unable to convert on three power play opportunities, but went a perfect 4-for-4 on the penalty kill.

The Crunch opened scoring with 1:02 remaining in the first period. Alex Green ripped a shot from the top of the right circle that was stopped by Tarasov, but Goncalves was down low to shovel in the rebound on his backhand.

After a scoreless middle frame, the Monsters evened the score early in the third. At 1:45, Kevin Stenlund was in the slot to redirect Jake Christiansen’s left point shot. One minute later, Syracuse was back on top. Antoine Morand carried the puck down the left wing on an odd-man rush before sending a perfect cross-zone feed for Gabe Fortier to send home.

Cleveland tied the game for a second time to eventually force overtime at 6:33 when Justin Danforth scored on a broken play.

The teams played a five-minute overtime period before heading to the shootout where Goncalves netted the game-winner in the third round when he went five-hole on Tarasov.

The Crunch travel to face the Lehigh Valley Phantoms tomorrow.

Crunchables: Simon Ryfors recorded his first AHL assist tonight…The Crunch are 13-for-13 on the penalty kill in the last five games…Antoine Morand played in his 100th AHL game tonight.