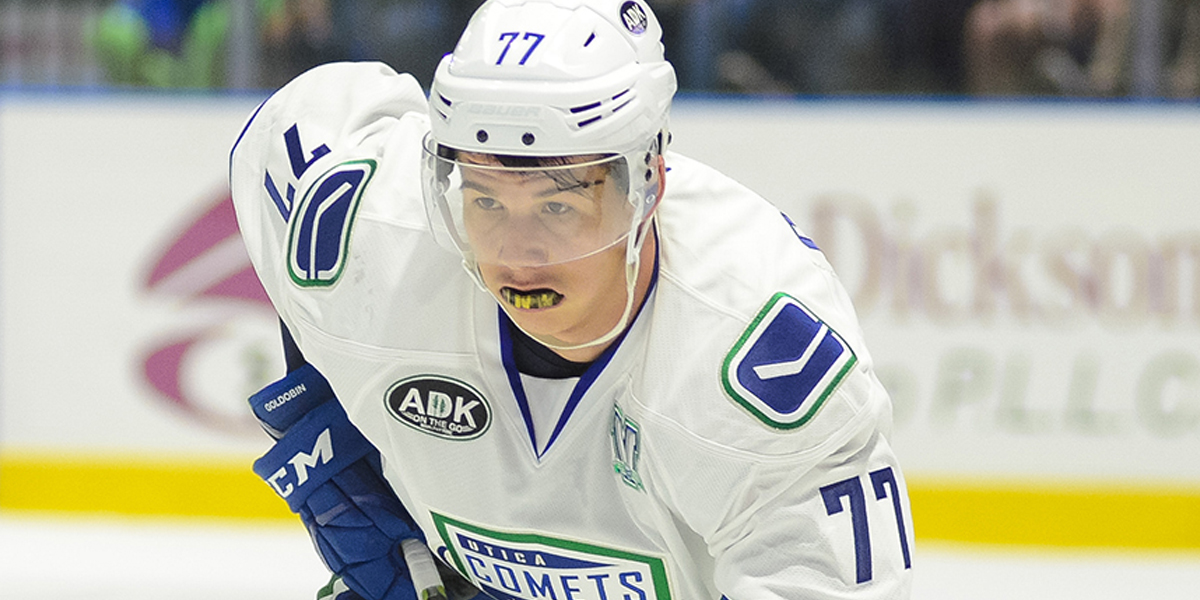 After introducing the 2019-20 roster to a sold out Adirondack Bank Center it was time to drop the puck for the Utica Comets home opener. Utica got a couple early power-play chances, but it was Syracuse who struck first while short-handed.

As the Comets entered the zone Dominik Masin stole the puck and moved it up to Cory Conacher. Conacher skated into the Comets zone edging ahead of Kole Lind before beating rookie goaltender Michael DiPietro over the shoulder. DiPietro was making his first professional start with Zane McIntyre being recalled by Vancouver earlier in the week.

The lead was short-lived and Utica tied the game 1:34 later on a Jonah Gadjovich deflection. Wacey Hamilton turned and blindly fired a shot from the side boards that Gadjovich deflected past Crunch goaltender Scott Wedgewood.

Syracuse regained the lead with 28 seconds remaining in the period thanks to Chris Mueller. Luke Schenn passed the puck to a wide open Alex Barre-Boulet in the high slot. Barre-Boulet took a shot on net that was turned aside by DiPietro, but Mueller was there to clean up the rebound and deposit the puck into the back of the net.

Not to be outdone, Utica added a late goal of their own. Nikolay Goldobin sent a puck towards the net that was deflected wide by Sven Baertschi. Baertschi tracked the puck down in the corner and fed a pass to Dylan Blujus who one-timed it into the back of the net with only 8 seconds left in the period.

With only seconds to spare in the first, @DBluu94 tied things up at two with a little help from @SvenBaertschi and @NG078!#SYRvsUTI pic.twitter.com/5gYrrdTmyB

The second period began with the teams deadlocked 2-2, but Utica exploded for three goals taking a 5-2 lead into the final period. First, at 12:23, Zack MacEwen sent a puck on net that Wedgewood couldn’t handle. Francis Perron was there and barely got the puck over the line giving the Comets their first lead of the evening.

Exactly 2 minutes later Lind found a streaking Reid Boucher in the neutral zone. Boucher skated in all alone against Wedgewood and fired a shot through his legs putting Utica ahead by 2 goals.

Utica increased their lead to three on perhaps the prettiest goal of the night. Goldobin and MacEwen found themselves on a 2-on-0 in the zone with a Crunch defender hustling to get back. As the Crunch defender slid along the ice attempting to break up the play, Goldobin allowed him to slide by completely out of the play. Goldobin slid a pass across the slot to a waiting MacEwen who potted his first of the season in the virtually empty net.

This just isn't even fair. @NG078 toys with the d-man and @zmacewen11 finishes the back door feed!#SYRvsUTI pic.twitter.com/qHgfYHJ1jO

Utica held a 29-11 shot advantage after two periods. Shortly after killing off their second penalty of the third period Utica added another goal. Goldobin picked up his third assist of the evening after breaking Vincent Arseneau on a semi-breakaway. Arseneau had his first shot stopped by Wedgewood, but followed up his own rebound for his first tally of the season.

Syracuse pulled Wedgewood late in the period to try and get something going, but Utica was victorious. Wedgewood finished with 32 saves. DiPietro made 16 saves in his first professional start and win.

Utica is back in action this weekend with a pair of home games. Friday the defending Calder Cup Champions Charlotte Checkers will be in town. Saturday the Amerks make their first trip to the Adirondack Bank Center.

Following their game Friday, Charlotte will head West on I-90 as they will be the opponent for Syracuse in their home opener on Saturday night.