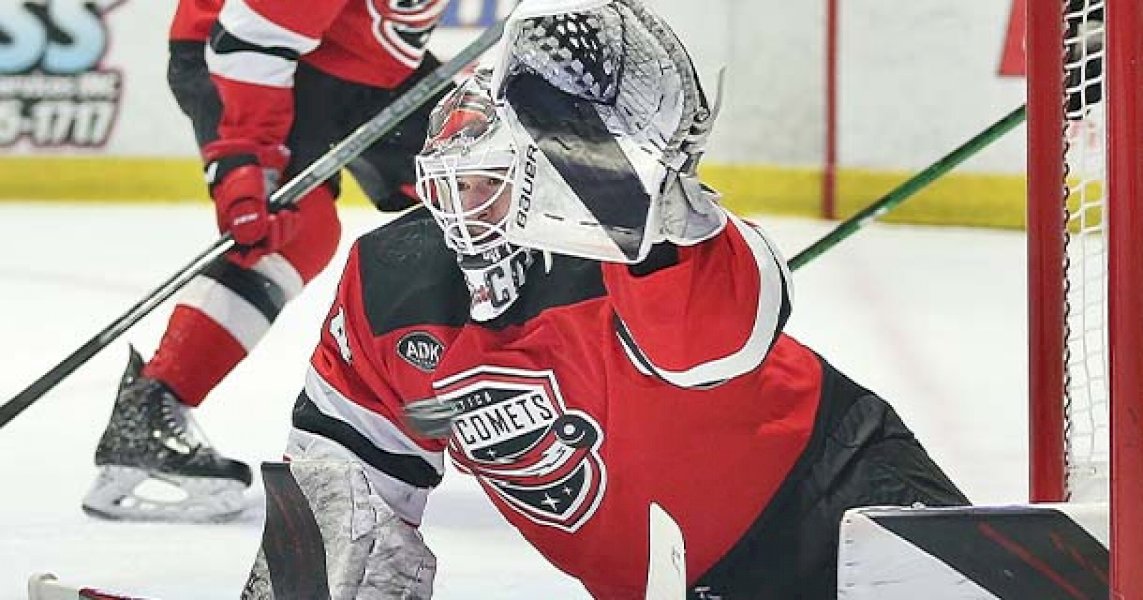 Utica, NY – The Comets battled Cleveland for the second time in as many nights and the result was not what the home team wanted as the Monsters held off the league’s best team and Utica suffered a rare home loss inside the Adirondack Bank Center by a 2-1 score.

After a scoreless first period which the Comets outshot the Cleveland Monsters 16-3, Comets forward, Alexander Holtz scored on a beautiful backhand shot on a partial breakaway at 2:50 of the second period. The goal was Holtz’s sixteenth of the year. Soon after, the Monsters tied the contest when forward Tyler Angle lifted the puck past Comets netminder Mareks Mitens and 4:47. Then Cleveland would take the lead after a breakaway shot that was saved by Mitens, where Angle would again find the back of the net at 17:31 of the second period. After 40 minutes the Monsters lead 2-1.

In the third period, the Monsters held the Comets off the board despite the numerous Utica chances including a five on three power-play and a late six on five advantage with Mittens on the bench for the extra attacker. The Comets dropped only their fourth home game in 22 games this season inside the Adirondack Bank Center.

The Comets are back in action Wednesday night against the Toronto Marlies at 7:00 PM before making their way back home against the Rochester Americans on Friday night with a 7:00 PM puck drop. Tickets are still available. You can purchase them by going to uticacomets.com/tickets.