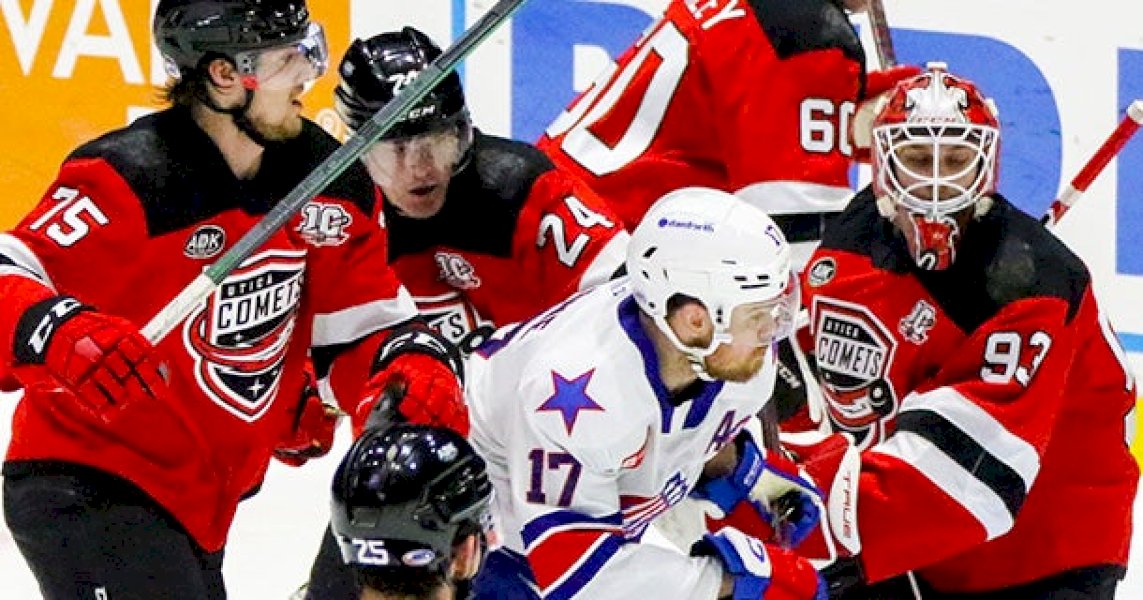 Utica, NY – After a few days off for the holiday break, the Comets took the ice Wednesday night in Rochester. Utica scored four unanswered goals and tied the game in the final minute, but fell in overtime 5-4.  Graeme Clarke extended his point streak, and now has 10 points in his last five games.

Utica had the heavy hand in the first few minutes of the game, outshooting Rochester 4-0. As the period wore on, Rochester started the scoring. Brandon Biro found a puck in front and roofed a backhand over Utica netminder Akira Schmid. Five minutes later, Brett Murray received a pass from Jeremy Davies and beat Schmid over his left shoulder to make it a 2-0 game after one.

Rochester kept scoring in the second. Michael Mersh tipped a wrist shot from Ethan Prow into the Utica goal to make it 3-0. Two minutes later, an odd man rush created chaos in front of Schmid, and Lukas Rousek made it 4-0. The Comets refused to quit and answered with two goals. Ryan Schmelzer capitalized on a turnover from the defensive zone. He went the length of the ice on a 2-on-1 chance with Jack Dugan, but took the shot and made it a 4-1 game.

Just over a minute later, Joe Gambardella took a puck away in the neutral zone, came barreling down the left wing and passed it over to Graeme Clarke who scored. It was Clarke’s 5th goal in three games, and the AHL Player of the Week extended his point streak to five games. After two, Utica trailed 4-2.

As they have so many times this season, Utica took over the third. First, a scramble in front of the net led to a Brian Halonen goal. The Rochester net came off its pegs, and the goal was reviewed but confirmed by the officials. In the final minute, Utica would get their game tying goal. Nolan Foote took a crisp pass from Reilly Walsh while Utica’s net was empty, and buried it to tie the game at four. The Comets now are tied for the best goal differential in the third period with +18.

In overtime, Chase Priskie ended it. Rochester created a 2-on-1 in the offensive zone, and Filip Cederqvist fed Priskie to seal the win for Rochester. Utica is now 1-4 in games decided in overtime.

The Comets are back on the ice Friday night at the Adirondack Bank Center as they host the Lehigh Valley Phantoms. Saturday night is New Year’s Eve with the Comets. The first 1,500 fans in attendance will receive a free bomber hat courtesy of Adirondack Bank. Tickets are available for the final two games of 2022 at uticacomets.com/tickets.