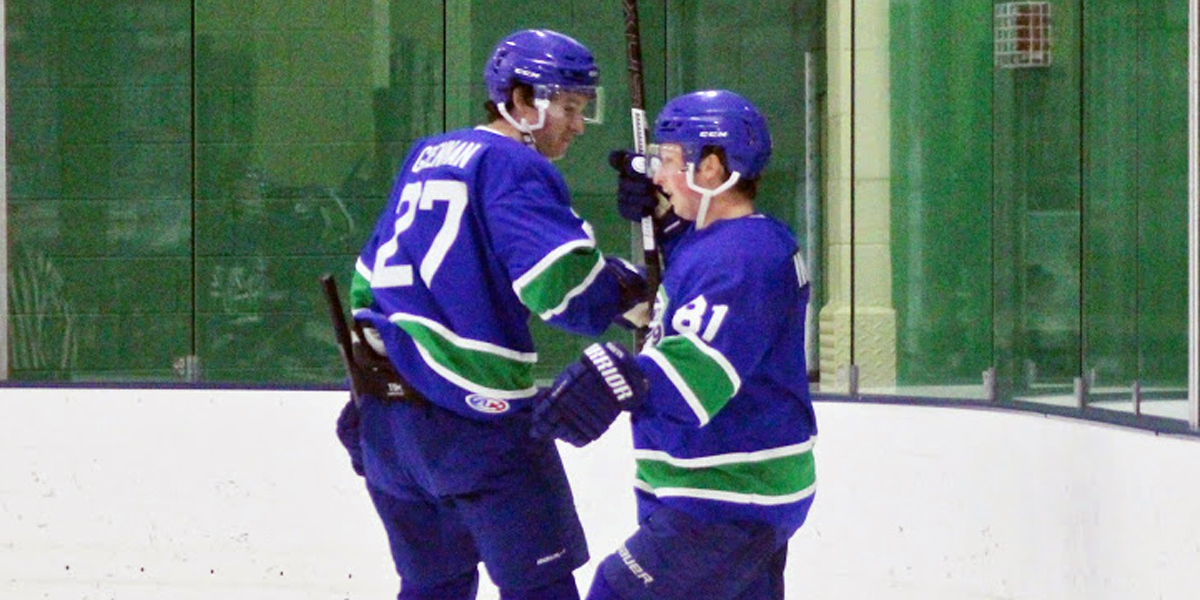 A Saturday night bout between divisional foes could be described as nothing less than a Gong Show. The Hanson Brothers may have channeled their energy into this game riddled with penalties and undisciplined play on both sides of the ice.

The Comets were prepared to take on a very physical opponent in the Buffalo Thunder, but with 74 minutes of penalties this match would be a war of the wills. Buffalo struck first with leading scorer Patrick Nowak beating goaltender Tripp Clarke with a power move at 16:08 in the first. Utica quickly answered back tying it up at 16:28 on a goal from Tyler Morin assisted by Tyler Knicley and Morgan Clarke-Pizzo.

The contest would take over two hours to complete as each team continued to find the penalty box, Buffalo successfully taking Utica out of their typical game using speed and skill to overtake their opponents. Ultimately, the Comets prolific offense would conquer the physical play of Buffalo. 48 shots on goal proved to be too much for Buffalo’s defense to handle. Five more goals would come from the Comets including a hat-trick from veteran Tyler Knicley, former Syracuse National Mike Herrera would pick up his fifth goal of the season, and Anthony Morin continued his offensive role nabbing his fourteenth goal. Clarke posted 27 saves to pick up his eighth win of the season, holding a .926 save percentage.

Both teams were happy to see this game put in the books without any serious injuries to either teams’ players, the two would meet again on Sunday afternoon.

Instead of a “Gong Show” this one we will have to call the “Gutt Show”. In a welcomed change from Saturday’s match both teams played a more disciplined and skilled game. Utica’s speed and offensive prowess proved to be too much for the Thunder to handle.

Buffalo would make this a closer match challenging Utica by taking the early 2-0 lead in the first period with goals coming from Brandon Lukomski and Anthony Coty. Utica’s John Gutt answered the call leading the offense in scoring with a true hat trick. The Thunder’s defense simply could not come up with a solution to Gutt’s crafty moves. Utica would also tally goals from Tyler Knicley and Anthony Morin. Colin Frost would hold court between the pipes stopping 32 shots for the win.

With the win the Comets hold sole first place in the North East Division of the Premier league and 2nd place overall in the league. Coach Lou Educate shared his thoughts on their weekend performance. “It was a good response from our guys coming off two losses. We just need to keep improving every night. We have a lot to learn and improve on, but I am very happy with our guys and the strides we took this weekend. We are always working to our ultimate goal. This was a big six points for the group standings.”

Comets travel to Merrimack College this weekend to compete in the IHC Showcase, they will meet Connecticut Knighthawks, Philadelphia Hockey Club and Motor City Hockey Club.